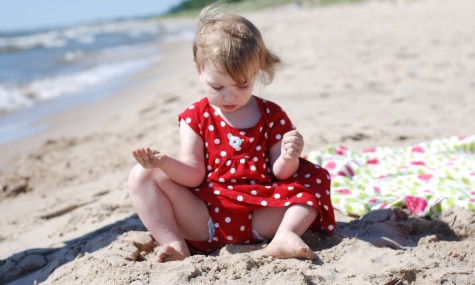 You don’t have to do much preparing to have this kind of fun.

I’d been packing pretty lightly until my brother John walked in, rigged out in a backpack on which he had hung a beach tent, sand toys and beach chairs, and assorted other gear. Then my husband Jon must have decided he had to make a better showing, and ran to our camping gear stash to grab his enormous backpack, a couple of folding chairs, buckets, pails, water balls, and I’m not even sure what else.

Waiting for him to assemble his Beach Preparation Kit (TM) took another half-hour, while my sister-in-law Jenna and I looked on in amusement (and perhaps just a touch of irritation.) By the time we finally started walking, we were quite a sight: four adults, two of whom appeared to be heading out on a journey to the North Pole by way of the lake, plus eight kids tottering along between groups of adults (who had to spread out because the menfolks’ bulky back apparatus would not allow for anyone to walk too close.)

Eventually we reached the beach without losing any children or either of the men toppling over. Unpacking our Beach Preparation Kits took some time, but once we finally had it all spread out and set up, we enjoyed a lovely afternoon at Lake Michigan. The weather was perfect, the kids were in good spirits, and everyone had fun digging and swimming and just laying in the sand. It was a beautiful, breezy, just-warm-enough day and we eagerly soaked it up.

When it was finally time to go, packing everything up took a good twenty to thirty minutes. Then there was the long slog with all of our stuff back up the incline of the beach. We stopped at the splash pad near the beach to rinse away as much of the clinging sand from the kids as possible, ate takeout pizza on a grassy hill overlooking the water, and finally, around 7 PM, started our journey home. By 7:30 we were back to our house…and the grown-ups were exhausted.

It was a beautiful, memorable day. But how often do days like that happen? Sometimes we just don’t have six or seven hours available to devote to a beach trip, plus all the requisite energy and good humor, not to mention a few extra sets of adult eyes and hands to help share the load. Some days it’s 95 degrees and humid instead of 80 and dry. Some days everybody’s cranky and you just want to get out of the house for an hour or two, not necessarily sign on for an all-day affair.

And yet, along with enormous diaper bags featuring eighteen different compartments and deluxe strollers sporting baskets that could hold a week’s worth of groceries has come the modern mom’s obsession with preparedness. We aren’t sure we can even leave the house, much less embark on a trip to the park or beach or zoo, without several quarts of water, child-sized containers of cut-up fruit and raisins, enough diapers and wipes to handle eight or nine surprise blowouts, at least two changes of clothes per child, reading material, sippy cups, a few toys, a huge bottle of sunscreen, insect repellant, hair ties, spare cash, a sling or two, crayons and paper…

See, I laughed at my husband and my brother the other day, but I also recognized a little of myself in their out-doing one another in preparedness. Over the years I’ve learned to leave the house with just the basic necessities – a diaper, some wipes, and a cell phone does it for me most days – but it took a long time to get over the idea that to take kids anywhere I’d have to carry a forty-pound bag stuffed with provisions.

I think that’s why something as essentially simple as a trip to the beach or park can seem so complicated and overwhelming. We get lost in the details of how to make it happen, try to cover every possible base, and try to make the outing “worth the effort” by packing for an expedition-length trip. What we forget is that sometimes it’s the short, simple, and spontaneous events that are the sweetest.

But sometimes “planning” a relatively unplanned outing can seem overwhelming in itself. How do you pack light while taking a kid or three to the zoo or the county fair without forgetting something really important? Can you really do a quickie excursion to the beach or nature trails without regretting it? I think you can, and that learning to handle those simple, spontaneous outings is a vital way you can learn to enjoy time with your kids without too much stress. Tomorrow I’ll be back with some tips for planning “un-planned” outings: the kind that feel easy, breezy, and no-big-deal-y, no coolers or painkillers required.