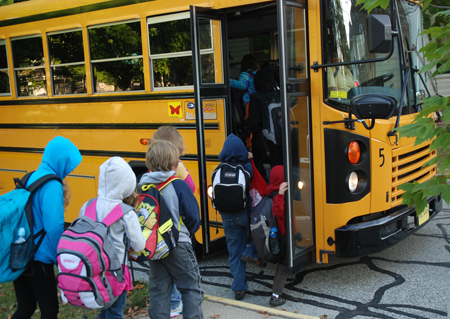 From the beginning of the year, my kindergarten son’s bus drop-off has been sort of a thorn in my side.

In the morning Owen walks down to the community bus stop with his older brother (you can see the two of them wedged in the door together in the photo above.) Since our district does half-day kindergarten, they have historically dropped off kindergarteners right at the house.

Not a huge deal, but definitely a grating little daily annoyance that I looked forward to being done with.

But yesterday was Owen’s last day of Kindergarten, and as I stood at the corner in the rain and drizzle, it occurred to me that this would be the last time he’d ride the bus home at midday.

Next year he’ll ride with his older brother and cousin in the afternoon; they’ll walk the final block to my house. I may occasionally walk down there and meet them, but it won’t be the same.

Yesterday was the last time I’d stand in anticipation of his little backpacked self jumping eagerly off the bus at noon; the last time we’d share the slow walk home all by ourselves.

And then I remembered that after this year, the district is going to all-day kindergarten. Clara will never ride the noon bus. Which, I realized, meant that this would be the very last time I would stand at that corner waiting for the bus.

I strained my eyes for a glimpse of the bus as the church bells chimed twelve o’clock, anticipating Owen’s dimples and the excited sparkle in his eye as he’d tell me about his snack (always his favorite topic of school conversation.)

I took the opportunity to notice, to appreciate, to savor it all.

But how many “lasts” do I miss, not realizing they won’t happen again?

The last time my oldest two sons took a bath together, crowded in side-by-side with their quickly-growing legs stretched out long.William has decided he prefers showers; perhaps that “last” has passed for him, too.

The last time Clara nursed. I figured we had a session or two left in there, and don’t really remember the specifics.

The last time any of my three oldest boys climbed into my bed in the middle of the night. 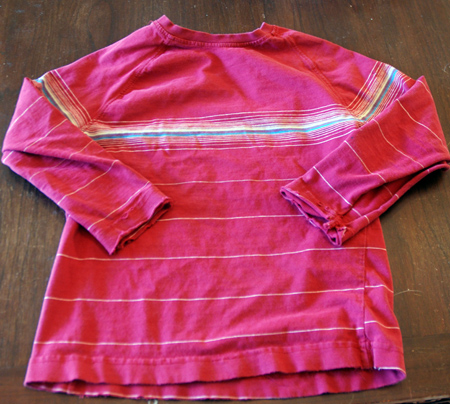 which had been passed down through four brothers, starting with Jacob in Kindergarten: 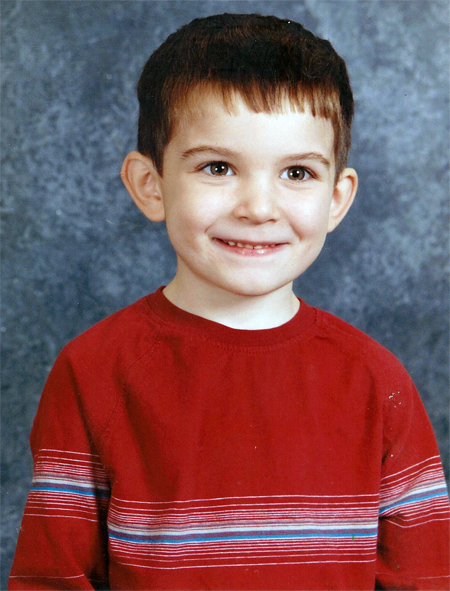 Until, faded and worn, it essentially disintegrated in the wash a couple of months ago.

So many unnoticed lasts.

Of course, there’s no way to record and acknowledge them all, and I’d probably drive myself crazy if there were. I’m already prone to morbid thoughts like “I wonder if I’ll ever visit this town again before I die,” or “I wonder if that’s the cemetery I’ll be buried in.”

If there was some way to track the exact last time each little milestone happens, I probably couldn’t function for trying to memorialize and document them all.

Still. It felt like a gift, that little moment of realization in the rain. It doesn’t happen often, but knowing without a doubt that this will be the last time I (fill in the blank) shakes me out of my distracted complacency, makes me take notice.

This, what’s happening all around me and sometimes getting in my way, is life. The only life I’ll ever get. The only 89th day of second-grade or 1100th day of life or second Tuesday in June 2012 my kids will ever get.

And while I know that life really is too full and too busy and too imperfect to go around celebrating every moment, every first, every potential last…

…well, sometimes it’s just nice to have the reminder.

What “lasts” have you noticed? Which have you missed?