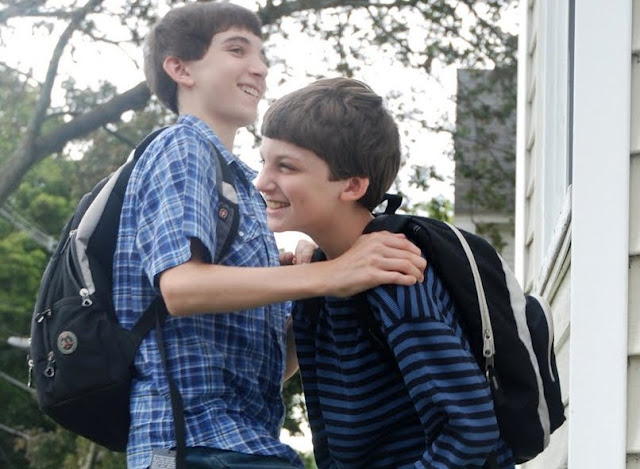 yes, my oldest son IS pretending to knee the younger in the 'nads.

Recently a friend recommended I read The New Global Student by author, educator, and mother of four Maya Frost. The book deals with some things I’m facing right now with almost-high-school-aged kids: making the most of these years without giving into useless hyper-competition; spending enough time as a family while still helping my older children become independent and pursue their potential.

I was stopped in my tracks a few chapters into the book, when Frost coined the term “fego” – Fear + Ego – and described how the combination of the two so often gets in the way of our making confident, loving, and ultimately effective choices for ourselves and our kids.

“When fear and ego converge, we become even more frantic to follow the path that everyone else is following. ‘They’re all headed in that direction! It must be the right one! We’d better hurry up and head down that path too!'”

And whether we really believe in the path or not becomes irrelevant when we let ego get in the way. We’re simply too worried about what everyone else will think if we don’t go along.

I think most moms find themselves ruled by fego at some point. I know I was when my oldest children were small. There was the “ego” part, when what felt right to me stood in direct opposition to what seemed right to everybody else. And then there was the “fear” part, where I second-guessed my own instincts, worried that the mystical “everybody else” actually had it right and I was going to screw up my kids in some major way.

Over the years, my sense of fego faded. After I had William and Owen, kids #3 and #4, I could see that Jacob and Isaac were doing just fine with me for a mom, imperfect as I am. My confidence levels grew, while my “gives a crap what anyone else thinks” levels sunk to record lows. By the time Clara came along, fego had packed up and slithered away to the outer recesses of my consciousness, where it stayed for a while, sulking.

But now that my oldest son is facing high school – and his brother is not far behind – fego is once again creeping in on the periphery. Having teens, having a high schooler, is uncharted territory for me…and with children soon to be on the brink of adulthood, the stakes feel even higher than when I was weighing feeding choices or trying to decide whether to use cloth diapers or disposables. How hard to push academics? How much to emphasize extracurriculars? Where to draw the line between helping and hovering?

I also know that many of the choices I feel compelled to make for my kids will be off-the-beaten-path. It’s my nature to question what “everybody else is doing”, to seek other roads for myself and my family. But following my gut doesn’t mean I’ll never second-guess myself or let fear and ego creep into my decision-making. It’s impossible to get rid of fego entirely: we can only, as Frost suggests, “put it on a high shelf.”

What I’m trying to remember is that there really is no such thing as “what everyone else is doing” or “what everybody else thinks.” Most of the time other people are far too concerned about their own lives to pay much attention to other people; and when they do judge, criticize, or look askance at another person’s choices, it often speaks the loudest about them and their own fear and ego.

And when I  feel like I’m paddling in a sea of conformity, I look around and see that there are always other parents who are trying to swim against the tide, too. Or maybe those who want to, and just need a little encouragement or some reassurance that they aren’t alone before they can fight their way out of the fego current.

It’s not that my path is right and the “mainstream” path is wrong; instead, I think the idea that “everyone else thinks X” is a figment of our fego-fueled imaginations. Regardless of how it looks on the outside, I don’t believe most of us want to follow anyone else’s path. We all have secret dreams, questions, passions, failures, fears, and hopes; we simply need to get around fego to reach our potential (and help our kids reach theirs.)

Sometimes the path that seems right to us can look quite conventional; other times, we might feel the need to shake things up and take a radically “different” road. Either path can be the right one for us, as long as we’re choosing it with our hearts and minds wide open – after taking a minute or two to put fego on a high, high shelf.

Thanks to Maya Frost for the food for thought. Regardless of your child’s age, I highly recommend The New Global Student. It’s a great resource for getting you thinking about different ways to raise “successful” kids (and what that means.)