Today’s post is brought to you by guest writer Erica Knecht of Expatria, Baby. 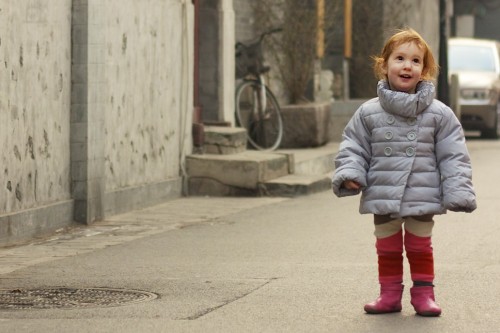 Three months ago, my little nomadic family moved from Japan to Indonesia. Within two weeks of landing in our newly adopted city, I had already achieved one of my chief objectives for settling in to our new life: I enrolled my two-year-old girl in preschool.

That I was able to tick this task off my colossal to-do list so quickly can be traced to a new development in my parenting style: I’ve become more Asian. I did not spend hours investigating pedagogical methods, or comparing the Montessori approach to the Waldorf. I didn’t seek out Mandarin lessons, baby ballet, or tot enrichment programs for my super special future genius snowflake. In fact, I gave very little thought to where I’d send my kid. I simply enrolled my kid in where all the other mothers in my newly-minted social circle sent their progeny because it was a short drive from our new home.

I did not I envision this first educational decision as a critical first step on the long path to Harvard. Rather, I just wanted three mornings a week to myself and a nearby preschool seemed like the easiest way to carve out some alone time.

For all the talk of obsessive over-achieving Tiger Mothering, it’s been my observation that most Asian parents don’t give much more than two figs about early-childhood accomplishments. Seven years of living on this continent has given me a great gift: I’m liberated from the ternary of North American parental anxiety. I am no longer obsessively tracking milestones and dreaming up endless baby betterment projects. Instead, I focus on what I can do to make our lives run just a little more smoothly and with a little more fun.

First, let me preface my argument by stating that I am by no measure an expert on the ways and means of raising Asian kids. Nor am I arguing that the unreserved adoption of Asian parenting practices is the way to go. Certainly there are undesirable facets of the Eastern parenting paradigm (Little Emperor syndrome, HELLOOOOOO.)

But what I have noticed here is a distinct lack of hand-wringing over parenting in the early years. Many Western parents feel social pressure to wait-list their fetuses for the most prestigious preschools. Some might watch (with a tinge of self-doubt) as friends drill their own infants with flash cards. Many Western parents put considerable thought into which parenting philosophy they’ll adopt, and then fret about how that decision impacts the timeliness with which their own children are reaching critical developmental milestones.

Asian parents, by contrast, are saying, “here little Mi-chan, have a mouthful of (esophagus-sized) candy, and why don’t you watch an hour or four of Mickey Mouse while you’re at it.”

And you know what? I’m growing quite attached to the Asian way of raising babies.

Before my child was even born, I was a classic, Lefty, type-A North American parent. I had read all the books, reviewed scientific studies, and memorized all the best parenting practices. I was determined to be a Number-One-Super-Awesome-Dr. Sears-Approved-Gold-Star-Parent.

Thusly, I obsessively tracked my girl’s milestones, I made spreadsheets mapping out her sleep habits, taught her sign language, powered through my intense boredom while I narrated the minutia of our days together, because I was pretty sure that an incessant stream of verbal spew would make her a tiny bit smarter. And me more awesome by proxy, of course.

All I got for my efforts was a raging case of postpartum anxiety and a baby who wanted nothing to do with my super fantastic educational books, except if she could gnaw on (and preferably ingest) their pages. 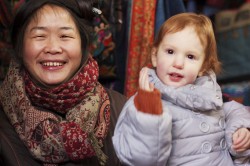 For the first two years of my girl’s life, we lived in Japan. On a visit home to North America when my daughter was close to one year old, I told my American pediatrician that my Stella was still not babbling. There were no “DA-DA-DAs”, nor “MA-MA-MAs” or any consonant sounds bubbling fourth from her mouth. Concerned, the doctor suggested that I have my girl evaluated and look into occupational and speech therapy upon my return home to Japan.

And so, I dutifully made an appointment with my Japanese pediatrician, pointed out dearth of BAs and MAs and asked him about rehabilitation, therapy, exercises, and specialists. He looked at me and my overly concerned Western parental paranoia with some quizzical amusement. “She’s fine,” he said. I pressed on, because I’m a High-Achieving, type-A, Gold Star Dr. Sears Approved parent. I needed to advocate for my kid.

Exasperated, the pediatrician finally relented and told me he could refer me to a speech therapist, but it would be totally unnecessary, and probably quite difficult to find an English speaking practitioner, and at one year old, she might not qualify, and generally he just wouldn’t recommend it.

I mulled the whole situation over for a while, and then a while turned into a long time, and lo, just a couple weeks before my girl’s first birthday there was a distinct utterance of “Mama!” Now, at two-and-a-half, she speaks in full sentences (albeit with toddler syntax), tells me stories, and is full of hilarious jokes (most notably, accusing the innocent of “tooting.“)

This attitude of laissez-faire (and laissez develop in the kid’s own sweet time) seems to be the norm in Asia. Kids walk when they walk, speak when they speak. NBD. When my girl and I met other mothers at the park, they didn’t ask if Stella was crawling, or walking, or talking yet. They didn’t compare their mini-prodigies own achievements those of my daughter. Instead, the Japanese mothers would asked my girl’s name, and then pass over a spade so she could dig in the sand.

While I was obsessing over achievements and milestones, Asian peers were not leveraging every single moment for language development (or any kind of development for that matter.) The other mums just sat in the park, enjoying some gossip while their kids played, and seemed much happier for that.

It took time and a stack of painful lessons, worrying about things that just didn’t warrant worry, but gradually I began to relax too. I’m loosening up about my kid’s exposure to screen time. I’m okay with the occasional lunch consisting of nothing but ketchup and chocolate milkshakes. I’m not too concerned about the fact that my two-year-old is still can not jump on one foot. She’s a late bloomer, and she’ll get there in her own time. And in the meanwhile, I’m reveling in her super awesome advancements in the realm of fart jokes. Because, COME ON! Is there anything more hilarious?

Erica Knecht is a mother, writer, blogger, and professional nomad, currently based in Jakarta, Indonesia. When not gallivanting across the globe with her two-year-old, she writes about the lighter side of tri-cultural parenting on her blog Expatria, Baby.

Look for more thoughts from Erica on cross-cultural parenting and happiness on The Happiest Mom next week!