By guest writer Erica Knecht of Expatria, Baby. This is Erica’s third post on cross-cultural parenting and finding happiness as a mom in a foreign country. Be sure to check out her observations on parenting a toddler in Asia, as well as a great discussion on post-partum rituals in other cultures. 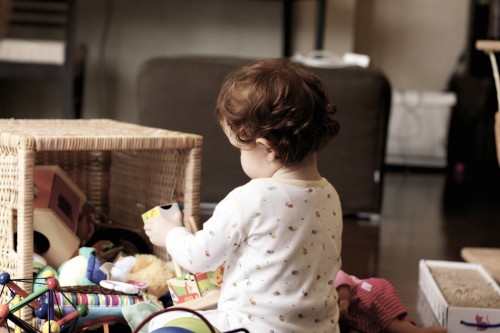 I have a confession to make: I’d rather be scrubbing dirty toilets than playing with my own toddler.

I was (am?) ridden with guilt about this. I mean, isn’t playing with a mini person, like, the whole point of birthing a child? Yes?

(But, also, come on! If I have to help an uncoordinated and easily frustrated toddler swaddle, change and feed a baby doll one more time, or order one more stone pizza and feign delight when it comes out of the oven…)

It wasn’t until I found a bit more confidence in my parental footing—with the help of some perspective I’ve gained from parenting in another culture—that I could cop to the fact that imaginative play just really isn’t my jam. Finally, when I said it out loud, I found that there were many other Euro-North American mothers who shared similar feelings about playing: specifically that it was stultifyingly, mind-numbingly, soul-crushingly boring.

It was then that I began to question my assumptions about play. Maybe I didn’t need to be my child’s constant companion and playmate. Maybe I don’t like playing because playing is boring. Maybe adults aren’t supposed to love playing. And maybe that’s okay.

Most Euro-North American parents value play. The books and experts tell us that play is essential to cognitive development. Marketers trumpet the brain-building powers of their toys. This one develops hand-eye coordination. That one teaches cause and effect. But the assumption seems to be that play is something that happens independently – between child and toy.

From what I’ve observed as an expat mother, Asian parents also value play. But play is seen differently here. Rather than a means of building neural pathways and growing genius babies, play is viewed as a means by which children learn to interact within the culture in which they live. Play is not about developing the brain so much as it is about developing relationships. It is through play that children learn how to be people.

“Let me make dinner,” I tell my girl. “Go play with your toys.” But she won’t. She wants someone to play with.

And maybe that’s normal and okay, too. 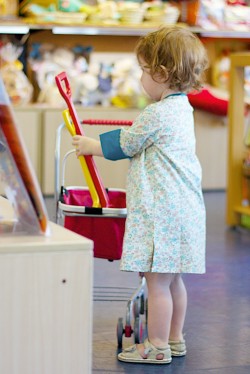 As is the social expectation in Indonesia, I’ve hired a nanny for my girl. Our nanny has become not only great porthole into Javanese culture and wonderful company for me, but she’s also become my daughter’s outlet for playing babies, stone pizza scenarios, and imaginary trips to the grocery store. I cook, clean, write, and pop in for five minutes here to join in a rousing game of carry-carry Baby Honey.

Now, before you berate me for my neo-colonial, bourgeois commodification of child care, please know that I have already done the necessary berating. Why do I need domestic help when I stay at home? Why can’t I just buck up and play with my kid?

Well, the answer is that through outsourcing play, I’m actually mimicking the natural order of traditional village life.

In an Indonesian village, once a kid can walk with a reasonable degree of confidence, he is let down from the mother’s selendang and sent out to play. An older sister or elder cousin takes responsibility for the child as he joins the pack of children who run around the village. The toddler is shown how to make dolls out of sticks; he’s scolded by his peers when he hits or takes a toy; he’s reminded by the big kids when it’s time to go pee-pee, and warned with a holler to be careful. He’s kept in the corner of his sister’s eye while she plays with her friends, and as he gets older and more aware of the rules and norms of the group, included in their play.

All the while, the child’s mother is at home, cooking, cleaning, or perhaps running a micro-business.

Finally, when the light gets too low, or the child too whiney, he is retuned to the cocoon of his mother’s batik selendang.

The mother in the village isn’t playing with her kid, and she doesn’t feel bad about it. She’s not second-guessing the educational value of the games she plays with her child, nor wondering just what neural pathways a particular toy will carve out.

That’s not her job. Certainly playful moments between parent and child do happen, and parents in the village, like parents worldwide, enjoy spending time with their children, tickling, giggling, and engaging in all sorts of playful tomfoolery. But in many cultures adults are not expected to be the primary play partners of their children. Play happens because it’s fun, not because it’s an obligation.

The kids are sent outside, out of the adults’ collective hair. Adults do adult things. Kids do kid things. The young ones play in together, bands of inter-age kids, all learning about social norms, responsibility, and how to be a person.

So maybe, if you’re like me, and you are considering viability of a self-induced eye-gouging as a means of escaping another round of “play cook!!!”, you shouldn’t feel too badly. Maybe you should just embrace the fact that playing is for babies, and you’re a grown-up, and man, it’s totally boring. And then, maybe you should find a nice, responsible neighborhood tween and hire him as a mother’s helper to play endless games of Baby Honey with your own honey while you cook dinner in peace.

What are your thoughts? Are you bored by play? Have you experienced play through the eyes of other cultures?

Erica Knecht is a mother, writer, blogger, and professional nomad, currently based in Jakarta, Indonesia. When not gallivanting across the globe with her two-year-old, she writes about the lighter side of tri-cultural parenting on her blog Expatria, Baby.

You can read Erica’s whole three-part series on expat parenting for The Happiest Mom by clicking here.