This post has been edited a bit since it first ran in 2010. The stories, though? Just as funny. 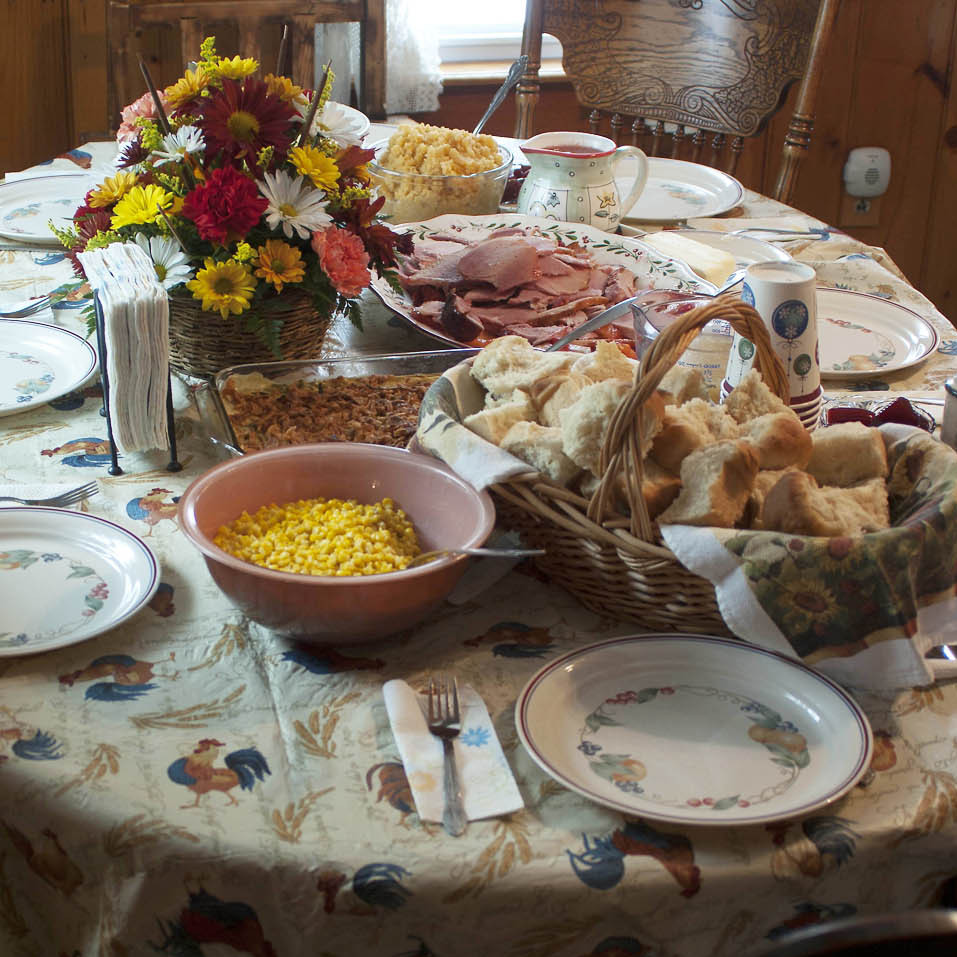 With Thanksgiving just a few days away, I found myself reminiscing about some of my more memorable food-related Turkey Day moments. I wanted to share a few of them here:

Jacob and Isaac, then 8 and 6, had just started at a brand-new school in a small town where we didn’t know many people yet. A note had come home about a special Thanksgiving feast, but I had kind of blown it off—I was hugely pregnant (about a week from my due date), and at the school my sons had gone to previously it seemed there was always some big ‘event’ or other to sign up for that turned out to be not that big at all (like the ice cream social where they served only popsicles…ooh, I didn’t get over that one for a while.) Anyway, I was expecting a typical cafeteria lunch of reheated turkey and canned cranberry glop–and I blew it off.

I happened to run into one of the other school moms in town that afternoon, and she said “Oh, I wish I had your cell phone number—I would have called to remind you about the Thanksgiving feast!” As it turned out, at this school, the Thanksgiving lunch is The Event Of The Year, with real home-cooked turkey, giveaways, games and a little concert from the kids—and my sons were literally the only children there who didn’t have a parent or some other special person with them. My oldest son had wandered around with tears in his eyes until this other mom felt sorry for him and “adopted” him for the afternoon. I felt so awful (not to mention totally embarrassed) that I went home and cried. Whenever I feel like I’m in danger of being cocky about my parenting skills, I think back to that Thanksgiving feast.

Edna Has The Last Laugh

When I was in the 4th grade our family “adopted” an elderly woman, Edna, through a community service organization in town. I remember spending hours in Edna’s musty, dusty, completely-full-of-every-kind-of-junk-imaginable house while my mother tried to engage her in conversation and she mostly looked around, “Harumph”-ing and griping about the mailman and the neighbor’s cat.

Edna was cranky. She had no teeth and didn’t bother to put in dentures most of the time. Her long, gray hair hung in strings down her back. She sat in a rocking chair in an old bathrobe surrounded by piles of papers and molding phone books. She snapped at pretty much everyone, and even when she wasn’t upset about anything, her normal voice sounded like a scratchy record. Her face hung in long droops around her toothless mouth. She sat hunched over most of the time.

To an 8-year-old girl, Edna was terrifying.

Anyway, one year my mother invited Edna to our Thanksgiving dinner. My brother John, who was about 12, and I looked forward to the visit with no small amount of anxiety, because as I mentioned above, Edna was terrifying.

As was my mom’s custom at special meals, we set out the lacy tablecloth, the cloth napkins, the fancy serving tray and the good silverware in the formal dining room. John and I sat across from one another with Edna at the end of the table between us. She was unusually quiet and hadn’t made a single loud noise or cranky remark since we’d sat down. As John and I sipped grape juice from crystal goblets and waited our turn to load our plates with turkey, mashed potatoes, stuffing, rolls, and cranberries, we thought maybe this wouldn’t go so badly after all.

But a few minutes into the meal I tried to catch John’s eye and saw that, instead, his widened eyes were trained on Edna. I looked at her and saw that something didn’t seem quite right. As she slowly gummed small bites of mashed potatoes, her breathing began to sound ragged and labored. Transfixed, both John and I stared at Edna as she drew her breaths slower and slower…

And then she slumped over.

We jumped. My mom gasped. A long moment crawled by, during which our minds tried to take in what had just happened and then…Edna suddenly snapped back into a seated position, her eyes flying open.

“GOTCHA!” she crowed, followed by a loud cackle.

I believe that was the day I developed the blinking tic that plagued me until seventh grade.

Our Goose Was Cooked

When I was about nine years old, my mom decided to cook a goose for Thanksgiving. I honestly don’t remember a thing about eating the goose, and I haven’t had one since. But I do remember loving my mom’s sense of adventure about it–that she had just decided she was going to try something new, whipped out her beat-up old cookbook, and went for it.

I’m taking my mom’s lead on a smaller scale this year–it’ll be the first year I’ve made an entire, cooked-from-scratch Thanksgiving dinner instead of heading to a relative’s house to eat their cooking (or, as we’ve done a few times, ordering takeout from Boston Market…)

I’m planning on using one of my favorite new cookbooks, Cooking at Home by Chuck Williams, to make our Turkey Day meal. I’ve made the Classic Pot Roast recipe in this book three times now, plus a few other dishes, and have loved them all. It’s a great book for timid or busy cooks–lots of simple, tasty recipes (but enough more advanced recipes to satisfy the experienced cook as well) and plenty of technique how-to.

So now it’s your turn…and don’t hold back! What are your favorite (or most cringe-worthy) holiday food memories?