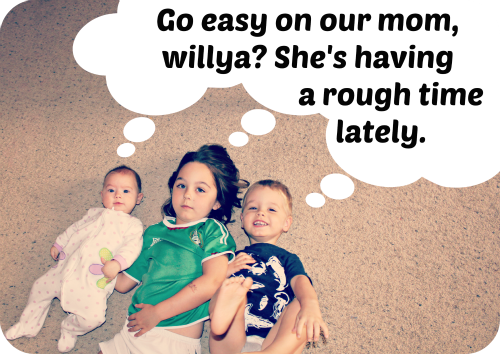 Things have been hard for me lately.

I’m saying that because it’s true, but also because I’ve noticed something. It’s hard for me to say “things are hard right now.”

Why is that? Why do I (and maybe you too?) say “I’m great! We’re really good. Things are fine.” when someone asks how we’re doing? Of course I’m not going to go into life’s every up and down when the grocery checkout clerk asks how our day is going, but I find that even with my good friends and those who truly want to know, I don’t say it.

So I’m saying it here. Things have been hard lately.

Not “wow, that was a crappy day” hard, the kind it’s fun to complain about with your girlfriends or post about on Facebook. Systemically, fundamentally hard.

It’s been hard for completely predictable (and almost downright boring) reasons: baby #3 is five months old and I’m still not sleeping at night – at all. It’s summer in Arizona, which is like winter in Minnesota for all intents and purposes. I have two older kids who are like every other kid their age in that they get bored, they bicker, they make messes and get into mischief. And remember how I didn’t make a summer bucket list so I could leave space for couch forts or some nonsense like that? Yeah, too much space. Too many couch forts.

But enough about that – for now. What I’m interested in is why I have a difficult time saying (admitting?) that this phase of motherhood – and yes, I know it’s a phase, this too shall pass, enjoy it while I can, yada yada – is kicking my tail a little bit? Or a lot?

Here are the reasons – valid or not – why I find myself glossing over this inconvenient truth:

Somebody else has it way harder

Meagan is recovering from a hysterectomy, has five kids and works full-time from home. That’s hard. Another friend of mine also has five kids under 10 years old, one with special needs, and recently had a stomach bug take down half the household. That’s hard. Remember my first-time pregnant friend? She completed her MBA last week at 38 weeks pregnant, 6 days before giving birth au natural. That’s hard.

(Not to mention, these examples are all from the realm of relatively privileged first-world motherhood – it goes without saying that many, many moms have it waayyyyy harder than this.)

Somebody always has it harder, and there’s a part of me that feels guilty or unjustified sharing that I’m having a tough time when all around me are women doing more, with less help, than I am.

I couldn’t wait to have a third baby. I choose to work part-time from home and get to do something I love. Everybody is healthy. I am so, so lucky to have the life that I do. So saying it’s hard feels ungrateful, maybe even a little spoiled.

Asking for help is hard, too – and it’s something a lot of us could stand to get better at. But in this case I’m not talking about asking a friend to watch the kids for a few hours. Sometimes it feels easier to say “all’s well!” than to tell the truth and be met with offers (really wonderful, well-meaning offers) to bail us out, when what I’m really looking for is more just a soft place for that confession to land.

Nobody likes a complainer

There’s a pretty persistent culture of negativity in some mom-circles, and it’s easy to get sucked into commiserating about our lack of sleep, piles of laundry, or our kid’s annoying habit du jour. But I prefer to keep things positive as much as possible, which is why admitting things are a little rough can feel like I’m just adding to the bitch-fest.

I don’t want to worry you

Post-partum mood disorders are serious business, and while I’ve never suffered from true depression, I once had a healthy bout of the hormonal baby blues and know what that kind of inescapable dark cloud feels like. I know myself pretty well, and I can say confidently that I’m not depressed or even unhappy, but I do hesitate sometimes in sharing how hard things have been for fear of worrying those who care.

It takes all of two seconds to tell someone we’re doing great; the truth is a longer story. I am really fortunate to have the support system of mom friends that I do, but our conversations happen in text messages typed with one hand or over the tops of half a dozen little heads whizzing by at a playdate. It’s not that they don’t want to listen or wouldn’t be sympathetic, it’s just that there isn’t always the time and space to have the conversation.

Here’s the thing: we really are fine – great, even – in the grand scheme of things. But that doesn’t change the fact that it’s been hard. The hard is part of the great, and it’s all tangled up together in a mess that’s hard to explain in a passing conversation with monkeys hanging off your every limb.

But here’s something else I know: when I take the time to acknowledge to myself, and to confide to someone else, that this is hard, I feel a little lighter. A little more truthful. I don’t feel guilty, ungrateful, weak, negative, or any of the other things that sometimes keep me from speaking those three little words.

And then? When we have that moment where I say “This is hard,” and you say “Yeah, it is”…guess what? It actually feels…easier.

Do you struggle with admitting when the going gets tough? I would love to hear if things are tough for you right now. I promise I won’t think you’re complaining or worry about you or offer to bring you dinner – I’ll just listen and say “Yeah. Me too.”

As I was writing this piece I remembered a blog post I read over a year ago by Amy of When Did I Get Like This? Amy’s post is actually a response to a piece of Heather’s from The Extraordinary Ordinary called your hard is hard and it speaks so perfectly to the problem of “comparing our hards”. It’s always the mark of a great piece of writing when you think of it months later, and when I returned to these after more than a year I loved them as much as the first time. I hope you’ll go read them both.