Thanks to ALDI for providing the food for our Outlander viewing party!

Back in my early years as a mom, I joined an online parenting community full of smart, thoughtful women. I took their advice on everything from the best breastfeeding positions to how to make baby food, but one suggestion, given often and with great persistence, fell on deaf ears.

“Outlander,” they cried in one voice, “YOU’VE GOTTA READ OUTLANDER!!”

And on and on it went. Jamie and Claire this, Scotland and kilts that, over and over until their insistence, like a drumbeat in my head, propelled me to the library. “Out. Land. ER. Out. Land. ER.”

But one look at the 800-page tome and I lost my nerve. Back in those days, with an infant and a toddler, I could barely find time to use the bathroom or load the dishwasher; how was I going to read an 800-page book? Besides, historical romance had never been my thing, and fantasy even less so. I just couldn’t see how this book was going to hook me. 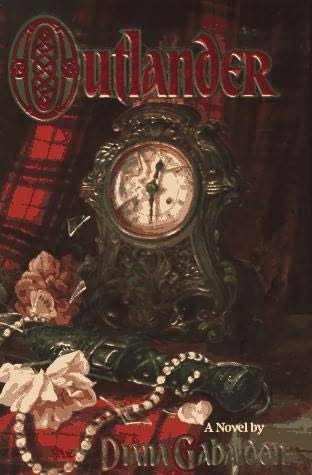 I mean really, this cover? I was very, very skeptical.

And so I stayed on the Outlander sidelines until just a few years back, when I got my Kindle and was eager for new reading material. Plus, since you can’t really tell how long a book is on a Kindle, it makes those epically long novels feel less overwhelming. So I gave it another shot…and became totally enmeshed in this romantic world of time travel, men in kilts, funny accents, and 18th-century Scotland.

Over the last three years I’ve read all eight Outlander books, several of them more than once, and I’ve convinced a few other people to start reading them, too. (Recruitment is how cults grow, after all.) And so, I was among those excited – okay, maybe a little too excited – to find out about the 16-episode television series premiering on the Starz network this summer.

To celebrate the premiere episode, which became available last week for free, my sister-in-law Jenna and I decided to throw a little shindig complete with Outlander-appropriate food and decorations. It was surprisingly easy and fun to pull off even for a couple of non-professional party-throwers, so I thought I’d share our ideas here so that you can whip up your own before the weekend. (Episode 2 doesn’t air until August 16, so you still have over a week to watch the pilot without falling behind!) 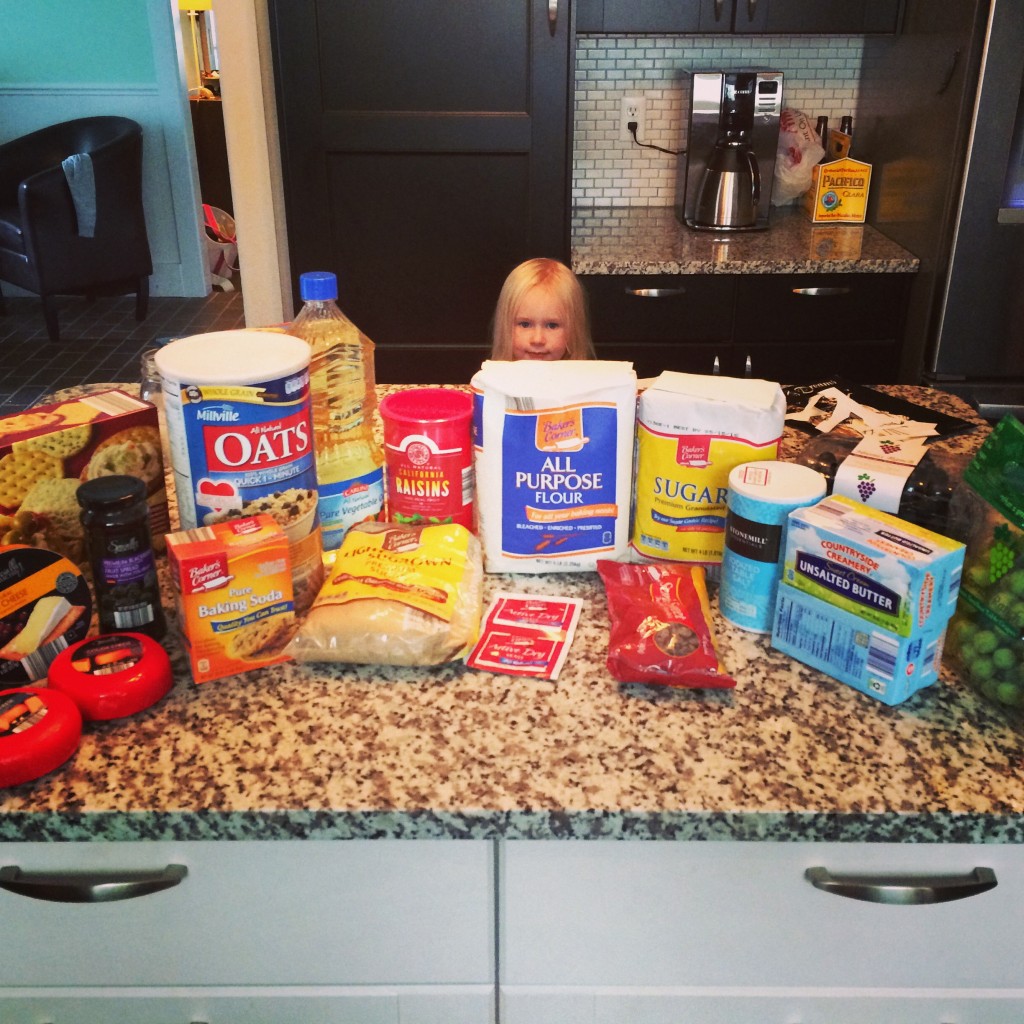 Photobomb courtesy of my niece Luna!

Earlier this summer my friends at ALDI sent me $100 in gift certificates to use to throw a party and blog about it, so I headed there early Saturday morning to get supplies, including all the baking ingredients, fresh fruit, crackers and an assortment of cheeses.

Here’s the thing about shopping at ALDI, though – it’s darn near impossible to use $100 there, even when buying all the ingredients for a party! In addition to all the baking ingredients, I bought enough fancy crackers, grapes and berries, Gouda, Edam, Havarti and Brie to last an entire season of Outlander and still had over $25 left in the end. Plus, as usual, I was in and out of the store in record time – less than 20 minutes altogether.

Next time you throw a party, definitely head to ALDI to get the food. You’ll save so much, and their deli, bakery, and cheese sections offer a lot of fun gourmet snacks.

So what did we decide to make? Well, I have to admit that on first glance, many traditional Scottish recipes don’t  look or sound very appetizing. Sure, I’d try haggis or blood pudding if it was on the menu in an authentic Scottish restaurant, but that doesn’t mean I necessarily wanted to try it myself. So Jenna and I decided to stick to snacks and sweets for the party – since it was scheduled for 2 PM, that felt more appropriate than entrails, anyway.

Here are the recipes we made and how they turned out: 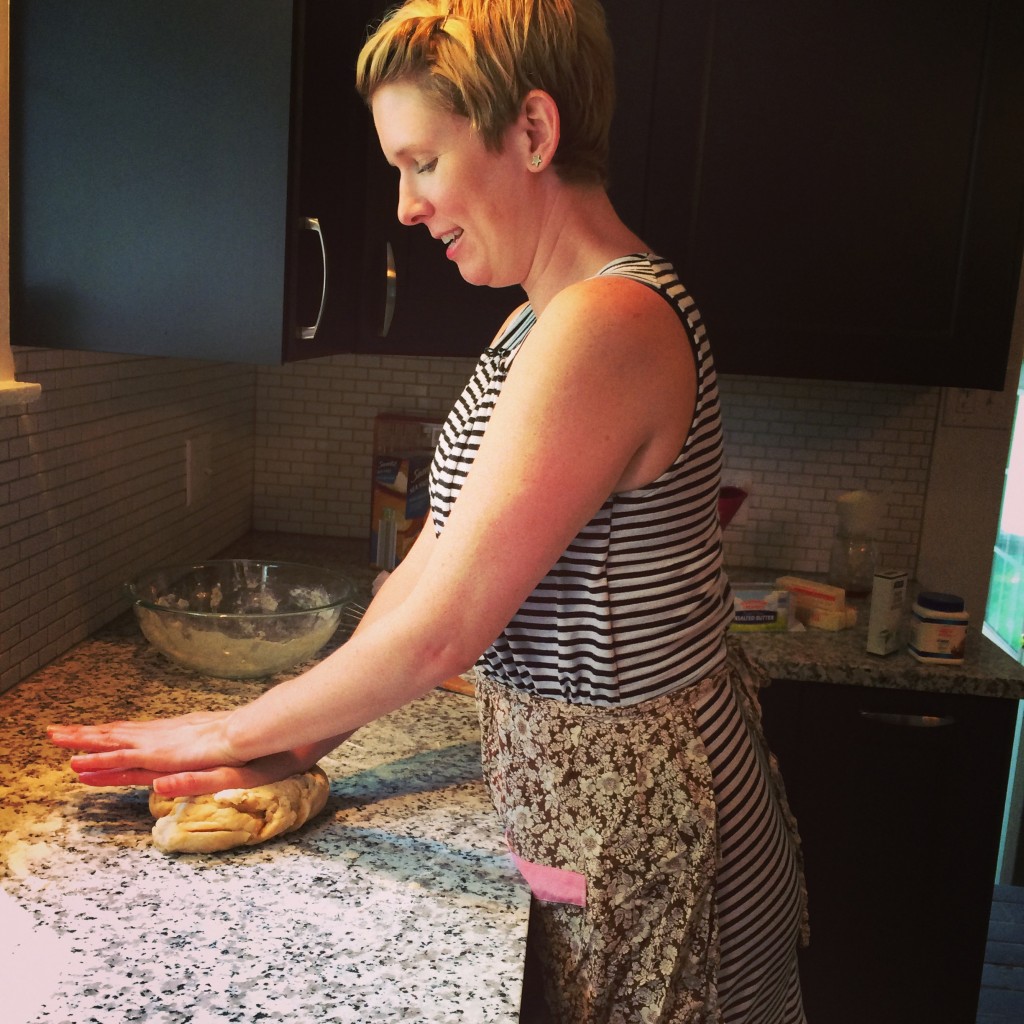 kneading away at a wee bit ‘o bannock dough!

Highland Toffee Bars. These aren’t true toffee; really more of a semi-sweet granola bar covered in chocolate. I forgot to get corn syrup, so we substituted honey and it tasted fine, though I think it might have made them a little more sticky. Definitely line your pan with parchment paper or a silicon baking mat – we had to ditch our first batch because it was hopelessly stuck to the pan!

Of the three pastries we baked, this one was the most basic, but also the easiest. It hardly took any time to whip up the ingredients and only took 12 minutes in the oven. I’m not sure how authentically Scottish this recipe actually is, but I felt like we needed to have oatmeal somewhere on the table and this did the trick! I would totally whip up a batch of these for an afternoon snack.

Bannocks. Bannocks are mentioned frequently in the Outlander books, but I opted to make a more refined version than the flat, unleavened oatcakes Jamie and Claire would likely have been eating on the trail in the 18th century (this recipe, the Selkirk Bannock, was said to have been invented by baker Robbie Douglas in the mid-1800s, so still traditionally Scottish even if it is about a century late.) 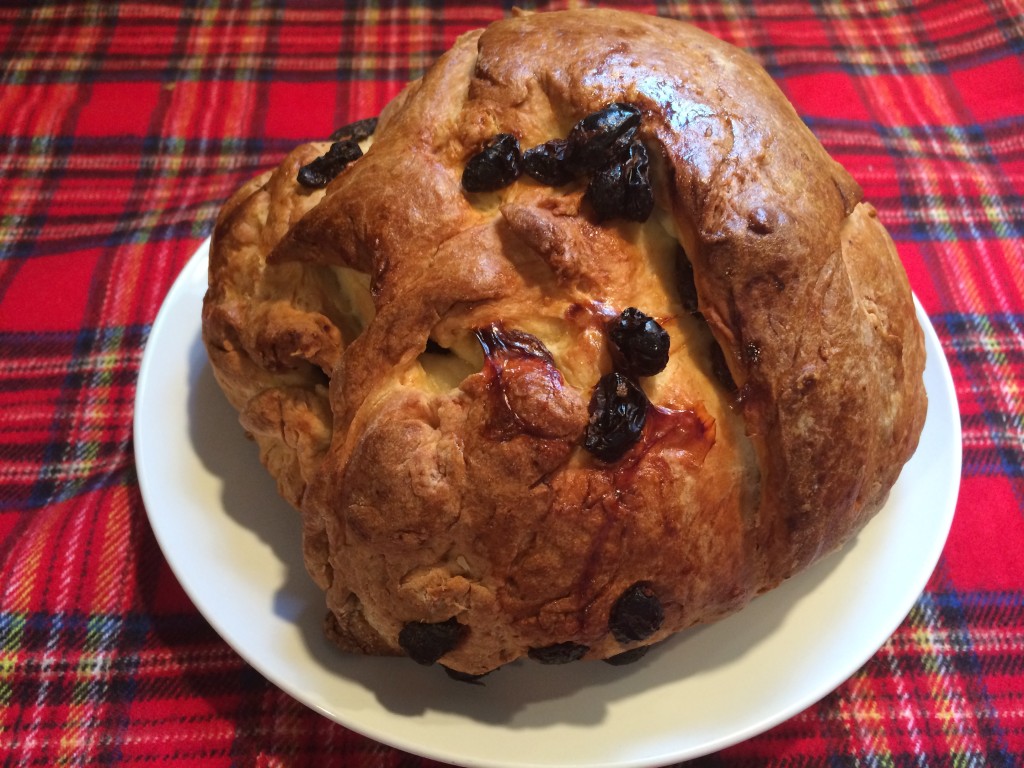 As you can see, the Selkirk Bannock baked up beautifully. I used regular old raisins rather than golden, and I like the color contrast they provided. The taste was good – a little drier and not as sweet as I had anticipated, but fluffy and great with butter. It would be the perfect accompaniment to an afternoon cup of tea – I’ll definitely be making this recipe again!

Scotch Shortbread. Of the three pastries we made the shortbread got the most rave reviews – but what’s not to love about a recipe that’s basically butter and sugar? There are about eight billion shortbread recipes on the Internet (I only exaggerate a little) so to keep things simple, I chose the one with the shortest ingredient list I could find – only five items, and we didn’t even bother with using “superfine” sugar. I also didn’t bother cutting out shapes, but pressed the shortbread into the bottom of a baking dish and then cut them out into squares. As an extra treat? We melted a cup of chocolate chips and drizzled it over about half of the cookies.

Sure Jamie and Claire sip water from springs and occasionally indulge in wine, but easily the most frequently-mentioned beverage in the Outlander series is whiskey – err, I’m sorry, whisky. Seems like rarely does a page go by without at least some mention of whisky, whether it’s being sipped from a flask, guzzled from a glass, or poured over a gunshot wound.

We didn’t have the courage to try making Cherry Bounce, so Jenna whipped up some seriously dangerously delicious drinks using a recipe aptly named for a less-sympathetic character in the book: Laoghair’s Whisky Sour. 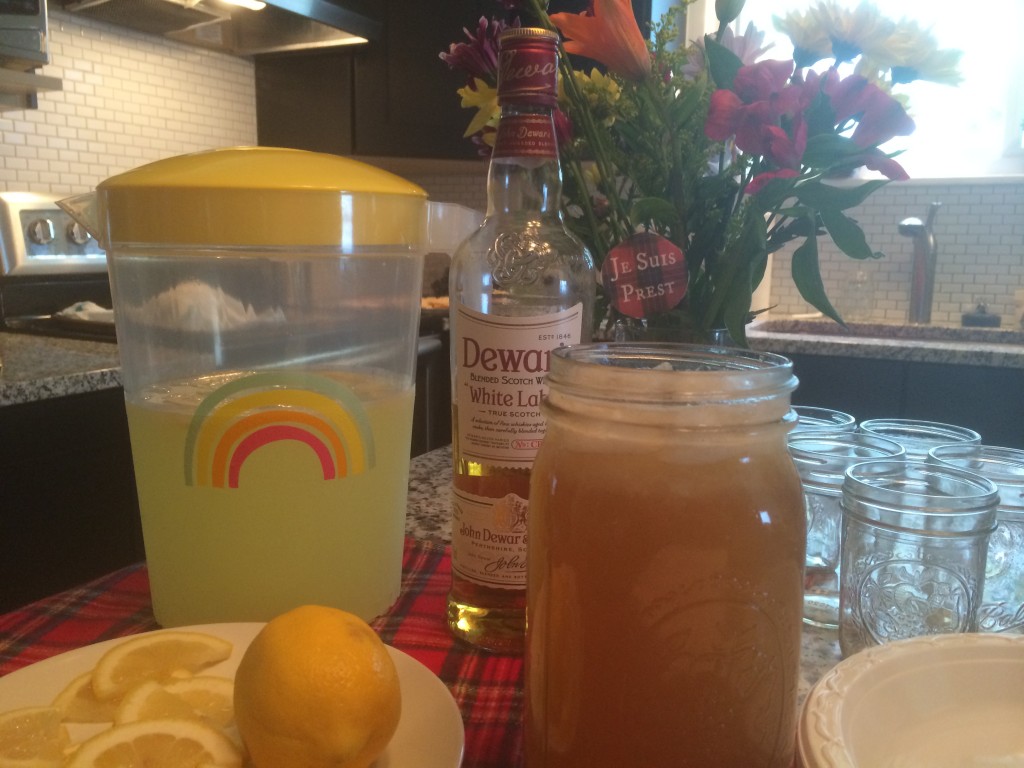 We chose to make the sours with Scotch, which is a type of whisky, but you could make it with whatever you have on hand.

(A bit of nerdery on whiskey vs. whisky: I was under the impression that “whisky” was simply an alternate spelling for the same drink as “whiskey,” depending on the country of the spirit’s origins, but it turns out it might not be as simple as that. Check out this article on The Kitchn for a MUCH longer explanation.)

I admit, decorating is the one area where I usually slack off when I’m having a party. I plan for the food, drinks, and music first, then run out of steam. Luckily Jenna is a lot craftier than I am and doesn’t shy away from some Pinterest party planning. She went to JoAnn Fabric and bought a yard of fabric in two different plaids, and made banners by cutting squares from the fabric and then gluing them to a length of double-folded bias tape. 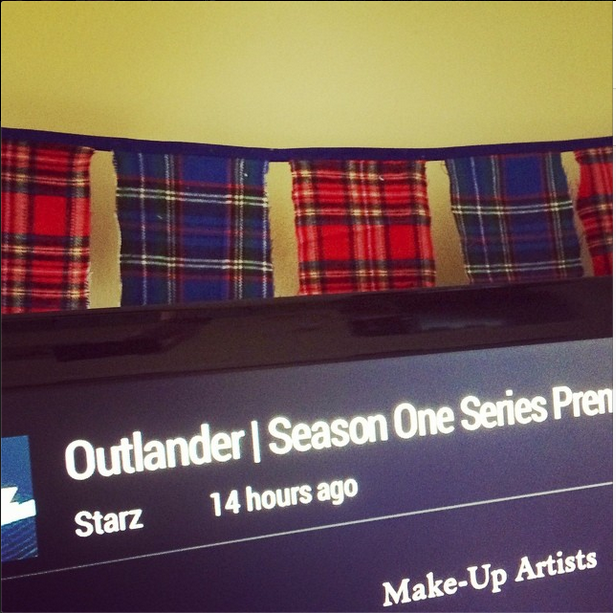 You may have also noticed the adorable food tags featuring funny sayings and quotes from the book/movie in the whisky picture and on the cheese platter in the pictures above. Jenna downloaded those FREE from ProfessionalFanGirls.com, and they added such a fun touch to the party! Though my personal favorite might be the pocket-sized Jamie, Claire and Frank. (Go download them now!)

Well, this is the biggest bummer about any viewing party: once the food, drinks, music and decorations are set, you still need to worry about how to actually get the show up on the screen. So far as I understand, the entire series will only be available on Starz (including Starz On Demand.)

However, if you just want to get a taste for the show or try out the pilot before you commit, the entire pilot is available on YouTube or at Starz.com for free, even to non-subscribers. We used Jenna’s ChromeCast to view it on her TV, and the quality was excellent; it would also work using a Roku box or other streaming system.

The cinematography was beautiful, the music haunting, the acting fantastic and so far, the plot is remarkably true to the book.

Of course there are some things that die-hard Outlander fans will have  hard time reconciling with what’s in their head (no, the actress playing Claire most definitely does not have a “verra verra plump bottom,” for one,) but for those of us who loved the novels, it’s another way to enjoy the story; and for those who haven’t read the books and maybe don’t intend to, it should make for some fabulous escapism and a great reason to sit down in front of the TV for an hour each week. I know I will be.

If you’re planning on checking it out, why not gather a few friends and throw your own Outlander viewing party? It’s a fun way to make something special out of a TV pilot, and might just become a regular weekend ritual.

(Still not convinced whether you want to invest the time checking out the Outlander pilot? Catch the trailer right here.)

*All Amazon links are affiliates – if you click and make a purchase, I’ll receive a commission at no extra cost to you.