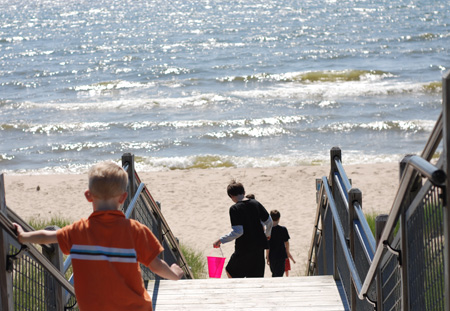 The relaxed, laid-back feeling of summer – and the inertia and lack of focus it can lead to – reminded me of a post I wrote back in 2009 about how motherhood forced me to realize that I need structure and thrive on activity. Enjoy!

The year after Isaac, my second-oldest child, was born was by far my worst year of motherhood.

We’d moved for my husband’s job, leaving behind my part-time job and the college where I’d been working my way through writing classes, when Isaac was just five days old (Jacob, my eldest, was 22 months old). There we lived amid strip malls in a humdrum Minnesota suburb, on the third floor of an apartment (not exactly conducive for getting out and about with two small children), through a gray, rainy fall and bitter-cold winter.

Did I mention it was Minnesota?

You could point to a lot of things contributing to my dissatisfaction at the time. I was isolated, with two young children, and my husband worked long hours. The only thing within walking distance was a Wal-Mart. I was surrounded by the gray, goose-poop-covered landscape of a large and rather drab apartment complex.

The loneliness, cold weather, ugly surroundings and soggy goose feces certainly didn’t help matters, but I could have dealt with all of that under the right circumstances. I’m outgoing, have never minded making new friends and jumping into new communities with both feet. And it certainly wasn’t the first time I’d lived somewhere cold and ugly.

No, the biggest problem I faced—which made all the rest of it seem that much worse—was inertia: the state of sluggishness, sitting still, lack of motion. At the time I thought I was depressed.

And I was, but not chemically. Instead, I was stuck: I couldn’t get moving, I couldn’t enjoy sitting still. And I couldn’t figure out how to get moving again.

Motherhood, especially when you have infants and toddlers, requires a lot of sitting down. Sometimes you get stuck under a nursing infant or cranky toddler for hours. Sometimes those built-in routines you’ve created for yourself to jump-start your day–the morning cup of coffee, the shower, the jog—get put off or even cancelled while you’re dealing with a mini-emergency or dressing a child who woke earlier than you’d expected.

And the longer you sit around with unwashed hair and no bra in your dirty pajamas on that unmade bed, the more sluggish you can start to feel, until it seems almost impossible to get moving again.

I realize all this now, but back then it was hard to see. The reason for my unkempt house and unkempt hair and my general inability to function wasn’t because I had too much to do, but too little. I’d been trying to do myself a favor by taking it easy, but it had backfired.

See, I’d always considered myself a laid-back, type-B personality. I never achieved much greatness in school, and came to think of myself as fairly lazy, disorganized, and unmotivated. It took me until my late 20s to realize that actually, I thrive on having a lot to do. I’m much more efficient if I have ten things on my to-do list than if I have none. If I give myself too much time to complete a task, it never gets done.

Despite everything I’d thought about myself for years and years, I need expectations and structure to my life to thrive. And once I have that structure in place, I’m actually extremely motivated, organized, and ambitious.

How did I figure this out? Out of necessity—and with much reluctance—I got a job outside the home, and to my amazement, the rest of my life fell into place. My house was cleaner, I got more things done in the few hours I had after work than I had previously been able to get done all day, and I was more consistent and engaged with my kids. I slept better, I ate better, I felt better.

I’m not suggesting that at-home moms suffering from inertia or dissatisfaction necessarily need to get a job outside the home, though some moms do thrive on working outside the home. Rather, it was the total 180 that showed me my true personality, and how different it was from what I’d always thought about myself.

Armed with a better understanding of what motivates me and keeps me on track, I was able to re-enter the world of at-home motherhood a couple of years later, but in a much more healthy way. Now I make sure to structure my life so that I’m up around the same time daily, getting out of the house every day (having kids in school and other people counting on me helps), interacting with other people, and working on projects that excite me.

One of the things I find most amazing about motherhood is how it shines a light on those deep, hidden parts of your psyche.

Everything you thought you knew about yourself might turn out not to be true. You can be so much stronger, more patient, and more giving than you ever thought possible. You may also find that you can be more anxious, irritable, and even petty than you would have wanted to admit.

The self-discovery is both awesome and inconvenient: it can be hard to figure out what makes you thrive rather than flounder while you’re also trying to care for a small, helpless being.

I still wouldn’t say I’m exactly “type A”, whatever that means. I’m pretty laid back. I love leisure. I can relax like nobody’s business.But I find that I generally operate best and feel happiest when I’m consistently busy and productive, with a day or two off here and there to recover.

Maybe you like a slower pace, or prefer to spread out your activity level instead of taking a work hard, play hard, rest hard approach like I do.

But the point is that sometimes, what we think we know about ourselves is just not accurate, and it takes caring for other small people – and everything else that goes along with motherhood – to figure that out.

If you feel like you keep running up against a wall and can’t seem to find satisfaction in your life as a mother, I suggest you shake things up. Toss out everything you think is true about the type of mom you are, or what you think is supposed to work, and try on something totally new for size.

Maybe you’ve been laboring under the delusion that you need your baby on a rigid schedule to keep your sanity, but it’s actually making you crazy.

Maybe you were convinced that filling your calendar with activities would keep you from experiencing loneliness or boredom (or would at least make you LOOK productive) but it’s just too much to keep up with.

Or maybe like me, you thought you’d do best floating through a free-form, no-expectations version of motherhood, but what you really need is an alarm clock, a routine, and a packed to-do list.

Forget about what “kind” of mother you, for whatever reason, think is “best”. The best kind of mom your kids can have is the one who’s true to herself…and happy that way.

Only you can say what will work for you. Sometimes it takes a while to figure it out.

And sometimes, you’ll amaze yourself.

Have you ever realized that something you always thought was true—or hoped was true—about yourself was all wrong?

Tags:cultivating contentment Getting Things Done Ideal Mother Juggling It All