Every Sunday morning I share a moment from my week and something it illustrated about motherhood, family life, or simply being human. I invite you to set aside a moment out of your weekend for reflection, pour yourself a beverage, and join me for Sunday Morning Tea. -Meagan

On Thursday morning, after getting the boys off to school and throwing a few last items in my suitcase, Jon, Clara and I got into the car and began the trip to Chicago to drop me off at O’Hare for a flight to Washington, DC for the TalkEarly Summit.

We worried about the weather as we headed toward the highway. It had snowed the night before, and now gusts of wind created walls of white in front of our faces. We pressed on, though: due to the “lake effect,” the conditions in our city are often wildly different from those on the highway and in neighboring towns, and the weather reports reported only light snowfall.

But once we pulled onto the highway we knew the trip was doomed. The swirling snow made it difficult to see, and once, a gust completely obliterated our sight to the extent that the car ten feet in front of us, with its hazards blinking, completely disappeared from view. The world shrunk to just us inside the car, completely surrounded by white.

We got off at the next exit, a few tense miles down the road.

Once at home, I wasn’t sure what to do. I really wanted to attend the meeting, but would the roads clear up? Around 11, the snow stopped blowing and the sun came out, and I emailed back and forth with the TalkEarly team about possibly catching a flight that evening – around 6 or 7, maybe, when the winds would have a chance to die down.

But I still couldn’t be sure about the highway conditions throughout the stretch of interstate 94 that wraps around the unpredictable southern tip of Lake Michigan. 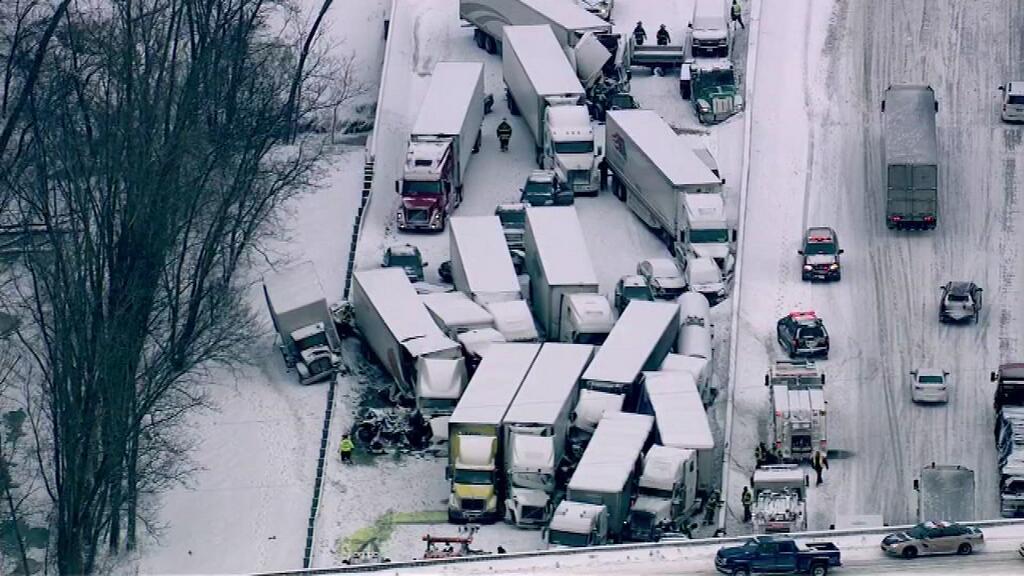 Thursday’s 30-vehicle pileup on 1-94 in Indiana, the stretch of road that lies between my town and Chicago.

Later that day, though, I found out about a 30-vehicle pileup that caused several deaths and many injuries, on the very stretch of highway I would have taken to Chicago. And the accident occurred right around the time I would have been on the road if I’d tried to make the evening flight.

When I first heard about the crash, my hands went clammy and I felt a clenching in my chest. What if we’d headed back out? What if Jon, and Clara and I had been among the injured – or, unthinkably, the dead?

It’s tempting to think that way when we hear about a tragic event that happens close to home, isn’t it? Close calls seem to happen to people we know all the time. Like the friend who posted on Facebook Saturday that she was at a fitness center right around the corner from the Maryland mall where a gunman shot and killed two people, then himself. Or another friend, who lives just down the road from the Indiana supermarket where three people were shot and killed last week.

Ultimately, though, I try to keep all those near-misses in perspective.

Don’t get me wrong: I’m glad I stayed home. The roads were definitely unsafe, and the whole situation felt “off” to both Jon and I.

Whenever I hear about something awful that’s happened, it’s hard not to play the “what if” game, even taking it to ridiculous lengths. What if I’d moved to New York City like I wanted to in high school after all, and had somehow been working in the World Trade Center on September 11, 2001? What if I’d somehow come in contact with a carrier of H1N1 on one of my travels, and had been one of the people to come down with a serious case?

The fact is that there’s no way to be fully aware of the brushes with disaster I’ve unknowingly averted. If you think about it, our lives are one big near-miss. And yet, we are usually more removed from danger than we believe, safer than we realize.

Life is fragile and dangerous. Yet I am healthy and safe.  One of the great mysteries of being human is that both of those things can be true at the same time. Everything is risk, yet most of us manage to skirt disaster. There are no guarantees that we’ll live to see another day, but the odds are pretty strong in our favor.

I think the challenge is accepting that anything can happen, without wasting time worrying about the things we can’t control. Any number of horrors wait in the wings, but very rarely will they reach out and snatch someone you know and love.

When it happens, it’s tragic. But only once in a great while was it avoidable in the first place, so what good does it do to worry?

I’m working to offset the knowledge that it could have been me or someone I know, with gratitude that it is not…and to round it all out with a healthy sense of self-preservation mixed with appreciation for the life we have today and the willingness to still take reasonable risks.

It’s a tough balance to strike, but the best way to stay both safe enough and still live our lives; to be aware, but not afraid.

My heart goes out to the victims of the crash and the shootings, and their families. They could have been me, or someone I love.

But for today, they are not. Today, we are safe.

Life is risky, and nothing is certain.

But still, I believe in tomorrow.