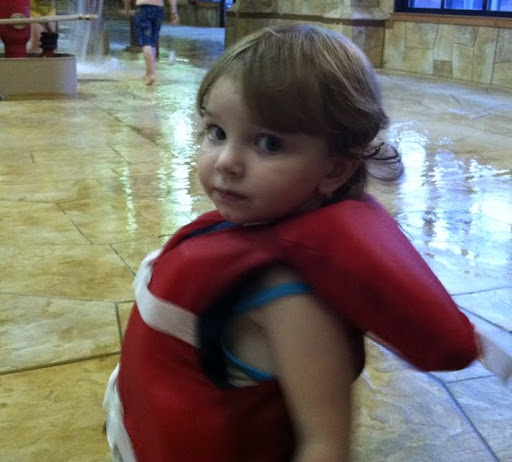 Since my oldest son was very small, we’ve been indoor waterpark enthusiasts. Starting with our inaugural family trip to the Great Wolf Lodge for New Year’s 1999, Jon and I – plus whichever kids we’ve had at the time – have visited at least a dozen different waterparks across the Midwest and beyond.

To me the indoor waterpark is the ultimate multi-aged family getaway: enough thrills to keep the big kids happy, with plenty of fun for the little ones, all wrapped up in one enclosed, chlorine-scented, pasty-midwestern-legs-allowed package.

And then there are the water slides. Though in my early twenties I outgrew my penchant for bumpy, jarring roller coasters (ouch) and flippy-upside-downy carnival rides like the Zipper (hurl), my love for the water slide has remained intact. They’re smooth, fast, and just thrilling enough for this tender-tummied mama.

I remember clearly how frustrating it was for me not to be able to just hit those slides over and over during those first few trips-as-a-mom to the water park. Sure, I loved hanging out with our toddler – and later, our toddler and his younger brother – in the oddly warm wading pool and lazy river to a certain extent, but I couldn’t help but feel the pull of the towering, twisting slides. See, I’ve always been a “doer,” more than a “watcher,” and watching other people have a good time just made me wish I was having a good time, too. Which, sidelined in the baby pool? I wasn’t, so much.

While I was able to sneak away a few times during that first trip, after we added our second son to the mix, tag-teaming became a necessity: with a 2 1/2 year old and devil-may-care 9-month-old playing in the water at the same time, it really helps to have two sets of hands. So during each water park trip I sighed and resigned myself to my fate: sitting in a few inches of warm water in the baby pool, watching my little ones toddle around and hoping I might get to steal away for a quick slide.

We went to the Wisconsin Dells Great Wolf Lodge again last weekend with all five of our kids plus our teenage niece and six-year-old nephew. The last time we went to a water park, Clara was about a year old, Owen was four, and William, at six, couldn’t really swim yet. This time, everything was different. Will is now tall enough to go off with his older siblings and hit every ride – even the terrifying looking “Howlin’ Tornado.” Owen, almost 6, is confident in the water but also old enough to listen to directions and not wander off. Clara, at 2 1/2, is steady on her feet. The little kids are old enough for one parent to watch securely, meaning the other one can take off with the big kids and hit some slides.

And hit some slides, I did.

But strangely, I also found that I was also pretty content hanging out in that baby pool. The same one that had once felt like a jail sentence now seemed like a nice place to spend an hour or two. Watching Clara go down the same tiny chute 8,403 times and Owen hop across a series of “lily pads” in the play pool almost as many times in a row was comforting in its repetitiveness (and after seeing it so many times, the images are pretty well burned into my brain now. Who needs a scrapbook?)

I’m not sure what was different this time around. I suppose you could argue that I’ve matured, but I don’t think it’s so much my age that’s made the difference as it is as years of putting in time as a mom. Maybe I’ve come to realize, after watching all these kids grow impossibly quickly, that those years spent “stuck in the baby pool” really go by in a flash, and before you know it you’re trying to keep up with your teenagers as they race up two dozen flights of stairs carrying a big plastic tube. Maybe I’ve also come to realize that the time for me to slide will always come, sooner or later, and I might as well just sit patiently and wait for it instead of feeling anxious because I want it to come faster.

Either way, I rather enjoyed the hours I spent stuck in the baby pool last weekend. No, they weren’t exciting or glamorous; but they were full of their own small pleasures, like the way my five-year-old son beamed when he got all the way across the rope bridge, or the way my seven-year-old ran fearlessly in as the enormous dumping water bucket tipped, then danced in unrestrained delight under the deluge. The way my two-year-old held out her arms for me to catch her, again and again, as she came sailing down her little slide. Or the way my two big boys, now lanky and tall and oh-so-cool, skipped away like little boys to ride the Howlin’ Tornado one more time.

Now that I think about it, that’s what has changed about me in all these years of motherhood: I’ve come to appreciate watching the people I love enjoy doing things just as much as I enjoy doing them myself.

Maybe that’s why I’ve come to love my vantage point from the edge of the baby pool. And funny thing – it no longer feels like being “stuck” at all.