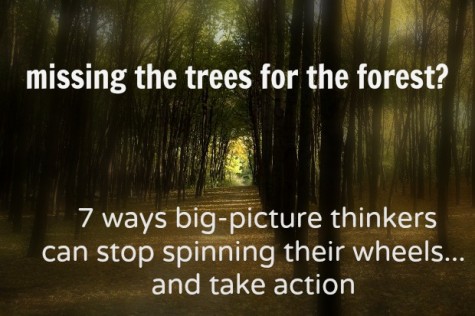 Last year I wrote about the obstacles big-picture thinkers often face when trying to create concrete, actionable goals and resolutions. From the post:

I’m a big-picture thinker. So, no surprise, my New Year’s resolutions, my to-do lists, and my goals in general tend to lean toward big and broad.

Of course, broad ideas do not usually, on their own, get you where you want to go. The dreaming, the feeling, the big thoughts…they are all crucial, yes. But without the necessary next phase–breaking down those ideas into steps–they usually just stay ideas, not concrete enough to become reality.

Sound familiar? If so, here are some ideas I’ve discovered some ways to move out of “wheel-spinning” mode and take action, turning those big pie-in-the-sky ideas into concrete realities:

1.Get those thoughts out of your head and down on paper. Often when we’re having a hard time focusing, it’s because there are too many ideas, possibilities or other obligations competing for our attention and energy. Take a few minutes to write down all the thoughts and dreams that keep getting in the way of moving forward.

Write down everything–every class you’ve considered taking, every domain name you’ve registered in a fit of genius (oh, don’t try to tell me I’m the only one!), every skill you’ve dreamed of mastering (knitting, carpentry, making the perfect pie crust), that grad program you considered entering next year, the doctor appointments you keep putting off making, those work deadlines that are always hovering in the back of your mind, the family vacation you’re hoping to take this spring. This list will probably look a lot like your brain feels: a jumbled mess of un-connected thoughts.

2. Categorize. Get out three pieces of paper and start dividing your big, messy list into three lists, one list per sheet. On one sheet of paper, you’ll write down those obligations you must attend to. As you transfer something from your master list to the “must-do” list, be sure to cross it off the master.

Now take a few minutes to schedule deadlines on your calendar for all your obligations. Once that’s done, you can toss the list. Feel a little more clarity already

3. Make a “Do Later” list. This genius idea came from Elizabeth, the editor of my book, The Happiest Mom: 10 Secrets To Enjoying Motherhood. It’s particularly great for people who have trouble letting go of ideas due to fear of missing out. One of the pieces of blank paper in front of you is going to become your “do later” list. Later could mean next month, next summer, or next year. “Later” could also mean “never”.

The point is that by putting those things you can’t or don’t want to get to now on a “do later” list, you aren’t really losing them. You still have them. You just don’t have to use up mental energy storing them in your brain all the time–that’s what the list is for. Once it’s done, you can put it away in a safe place.

4. Make a “Do Now” List. At the top of one of these lists, write DO NOW. The trick is, you only get to put five things on the “do now” list. Limiting yourself forces you to look at your master list with a critical eye. Is this really the year you’ll volunteer on your child’s yearbook committee, or does the fact that you’re 38 weeks pregnant make that not such a hot idea? Is it likely that you’ll take Zumba, weight training, Pilates AND yoga all at once? And do you really want to launch superawesomefashionguide.com or start a pet-sitting business this year…or ever?

On the other hand, don’t be afraid to dream big on this list, if those big dreams get your heart racing (in the good kind of way) and feel right.

5. Start Categorizing. Assign each item off the master list to one of these two lists. If you’re having trouble deciding which things to transfer to either the “do now” or “don’t do now” list, give yourself some kind of criteria you can check in with. Maybe you’ll use something very practical, like cost, schedule, or an activity’s proximity to your home, to help you decide.

Or maybe you’ll simply check in with your gut–if your body screams “YES!” when you think of signing up for those jazz flute lessons, that’s a pretty good indicator that it should go on the “Do Now” list. Likewise, if your body’s reaction to launching a new business is more of a sinking, “man that sounds like a lot of WORK” feeling, this probably isn’t the time. Onto the “do later” list it goes.

During this process you may start to get a little high on streamlining and decide that some things just don’t belong on your “do later” list–they only wound up there because you thought you “should” do them someday or because they’re a good idea…for someone else. In that case, you can simply cross it off your “do later” list. Or if you want to give them a formal bye-bye, you could even start another list–a “Don’t Do Ever” list. You might find satisfaction in the finality of officially removing something from your lifelong to-do list.

5. Set a “dreaming” deadline. If you’re having a hard time getting started working toward your goal because your brain is swirling with possible approaches, don’t fight it. Allow yourself some dreaming time–but set a deadline, i.e. “I’m going to let my mind go crazy with the big picture and from now until Tuesday, and then I’m going to get down to brass tacks.”

6. Ask yourself “What’s the next thing?” This tidbit from David Allen’s Getting Things Done comes up constantly when I’m having discussions about productivity. No wonder: it’s a simple, sanity-saving way of figuring out how to make progress. Stuck? Simply ask “What’s the next thing I need to do?” Some days, when you’re feeling particularly overwhelmed, your “next thing” might be as simple as “get dressed.” Other days, when you’re feeling like you could take on the world, that “next thing” might be “find the phone number of my Senator.”

Got ten minutes? Get all those jumbled thoughts out of your head and create your lists. I want to know–what made your Do Now list? What are some of the things that got tossed or shelved for later?