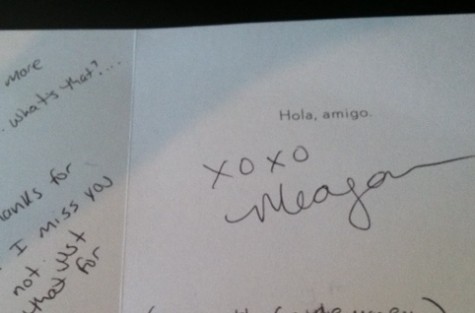 On Monday, I wrote about the Hallmark Get Carded Challenge and asked all of you to think about 7 people you would like to send a hand-written “hello” to.  I loved reading the responses! Best friends, sisters, grandmothers, pastors…so many people in our lives that are important to us, but that we don’t always have time to reach out to.

Or at least, it doesn’t seem like we have time.

But of course we do, right? Because sending a card in the mail takes about two minutes, if you really think about it. It’s more a matter of setting the time aside. Of making it a priority. Of making them a priority.

So I was really glad this challenge forced me to do just that, because boy do I know how easy it is to let all the little, urgent, daily stuff get in the way of the big, important, life-long stuff.

Many of you shared some of the people you’d be sending notes to, and now as promised, here’s my list (some of whom are probably still waiting on cards, so…sorry, spoiler alert!)

My grandma. Because she’s awesome, and hilarious, and I don’t see her nearly enough. She’s also one of the few people who still regularly, religiously sends me physical cards, usually with a check tucked inside (Thanks Gramma!) and will respond to my not-frequent-enough handwritten notes with long, gossipy letters of her own. She’s also my last remaining grandparent and, since both my parents are gone, I am feeling particularly anxious to hold on to that connection as long as I’ve got her.

My best childhood friend, Jackie. We grew up three doors down from each other and were together every day from the time I was 7 until I was 12, when I moved away. But we’ve kept in touch, first via letters and visits, now via Facebook. We both have very different but busy lives and have not seen each other in far too long. I still think of her every May 9, on her birthday, but somehow never seem to remember before her birthday to send a card. So maybe this could count as twenty years’ worth of “oops, I forgot to send a birthday card” cards.

My sister Kathreen. Kathreen is ten years older than me, so she was the first person I looked up to for musical taste and fashion sense, and she was my mom mentor before I ever had kids. She was patient with me: I was the 18-year-old horrified that she wanted to “do that” (breastfeed) in public, then had to eat my words just a few years later. Now that we’re both bona fide grown-ups, we’re just the best of friends. We used to live in the same town and saw each other almost daily; now we see each other monthly at most. Not enough! 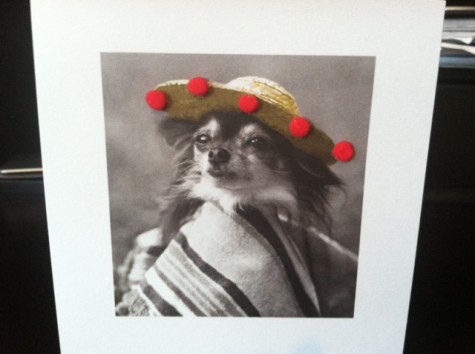 This card cracked me up for some reason. I hope it cracks Toni up, too.

My friend Toni. When we were both launching our writing careers, Toni and I used to keep our instant messengers open and chat with each other on and off all day. Since then we’ve both tried to take a big step back from being online all the time, and chat a lot less frequently. We’re both a lot more productive this way, but I miss her! Also, I’m pretty sure she doesn’t read my blog, so I can be all, “I wrote that I was sending you this card and you didn’t even see it because you don’t read my blahhhhhhgggg!” Then again, I don’t read hers regularly and she doesn’t care either. We have that kind of friendship, and in a world full of expectation, I appreciate that.

My brother Buck. He lives in Minneapolis with his wife Kelley and their four awesome kids and we don’t see them nearly enough. Buck is that brother every girl wants: sarcastic, a fount of funny movie trivia, and makes fun, incessantly, of that guy she went to senior prom with because all her friends said they were going to go stag and then they all got dates at the last minute and there was nobody left and she had to go with a tenth-grader and besides it happened twenty years ago so when is he going to let it go already????

Plus he always appreciates funny one-liners, so I came up with a bunch to throw randomly on his card.

My cousin Mollie. When my dad died, Mollie was great – she made the trip up for the funeral, hung out with us at the house and was just in general a calming presence full of happy memories. Then last month her mom, my aunt Pat, died, almost exactly a year after my dad. The timing was really hard and I have to admit I wasn’t as present for Mollie as I wish I had been. I sent her a card just to let her know I’m thinking about her.

My aunt Paula. My aunt Paula was who I wanted to be, growing up. She was the glamorous actress living in a flat in Chicago, no kids, and a closet full of cocktail dresses. These days she lives in the suburbs and plays bridge, but she’s still the same aunt Paula. She lost a brother and a sister within the space of a year, and I’m sure she could use a cheery note from her favorite niece. Me. (Just kidding.) (Sorta.)

I know you’ve been waiting to find out who won the greeting card packages from Hallmark – so here are the winning comments! 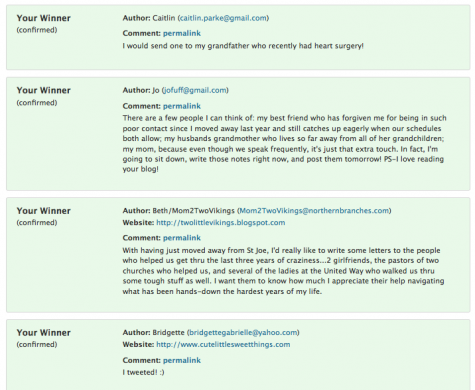 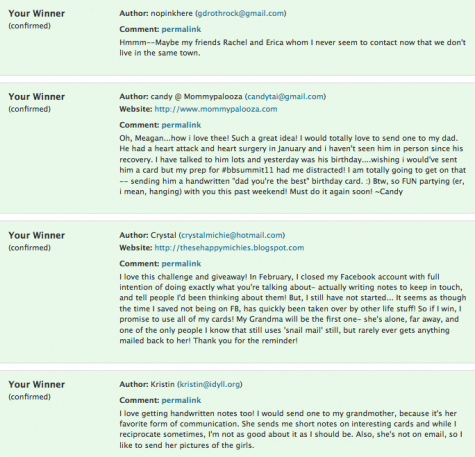 Congratulations everyone! Huge favor to ask – if you’re one of the winners, can you please send your mailing address to me at meaganfrancis at yahoo dot com? It’ll be that much easier and faster to get your prize packages out the door that way. If I haven’t heard from you in a few days, I’ll send you a note.

Edited to Add: I can’t believe I forgot to put this in the post originally, but a note about how contest winners are chosen: I use a WordPress plugin called “And The Winner Is.” It chooses winning comments randomly and then gives me a screen shot of each winning comment so I can show it to you!

Thanks to everyone for entering and even if you didn’t win, I hope you’ll take a few minutes this week to sit down and write a note to somebody who matters to you. It really doesn’t take long – and it feels so good to say “hello.”

This post was part of a sponsored campaign I’m working on with Hallmark. Over the next several months, you’ll see a total of ten posts that have to do with the theme “Life Is A Special Occasion” – something I believe wholeheartedly. I’m being compensated for my work with Hallmark, but the ideas and opinions in these posts are all mine.