It’s “only” in the mid-80s here. But the humidity actually feels like a steam bath. It’s so sticky a mosquito got stuck to my face last night. And that reminded me of a post I wrote about a year ago about having to overcome my squeamishness around certain kinds of wildlife in order to give my kids the childhoods I want them to have. I thought I’d share it now, since I’m too overheated to come up with anything original. And also, because I’m hoping it’ll inspire me to get out and hit the trails again once this heat wave has rolled on past. Enjoy! 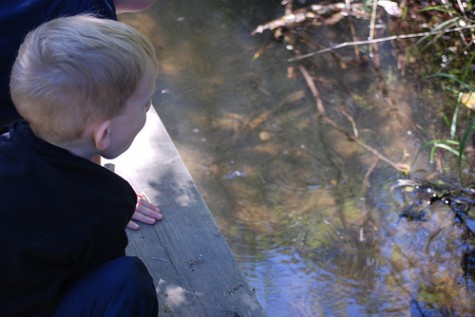 owen looking at a water bug

I’ve always been a nature lover. Growing up in the Upper Peninsula of Michigan with forests in my backyard (literally), trees and trails seem to be in my blood. But I’ve also always been a bit timid of creepies, crawlies, and creatures with sharp teeth. When I was seven, a friend who lived on the other side of a small patch of woods told me that groundhogs had been known to chase down small children and bite them. After that, I lived in mortal fear of groundhogs…until I actually saw one (turns out they’re actually pretty cute). And after reading On the Banks of Plum Creek, I was terrified of wading into anything resembling a creek lest I befall the same leech-covered fate as Nellie Oleson.

This puts me in a difficult position with my kids. While I love movements like The Green Hour and the Children and Nature Network and have written about how to get kids off the sofa and out in the woods (or even the backyard!), the truth is I’m kind of a wimp. I don’t like things that flap their wings too close to my head (Big flies, ahhh! Bats, gahhh!) or that bite. I especially don’t like things that suck blood. (I mean who does, right?)

We are fortunate enough to live just a quick drive from a fantastic nature center with winding, meandering trails refined enough to keep kids on the path instead of accidentally trampling through underbrush, but rugged enough that you don’t forget you’re in, you know, nature (some hiking trails more resemble a stroll through a city garden than the woods!) When I first moved to this area, the boys and I made several trips with my sister-in-law Jenna and my little niece and nephew, and enjoyed rambling through the trails.

Then came the Tick Incident.

It had been a lovely spring day. Jenna and I and the kids were joined by our good friend Melissa and her two boys that day. Two-month-old Clara was strapped to my chest in the Ergo carrier and the crew of us tromped through the woods and wetlands, thoroughly enjoying ourselves.

A few hours later, after we’d gotten home, I was helping William pull his shirt off and saw a most unwelcome sight: a large wood tick doing a headstand on his shoulder. Or, actually in his shoulder, since the disgusting little thing’s head was buried in his flesh. Remaining as calm as possible, I began a fruitless search for tweezers. Finally I called Jenna for backup. She came over with her tweezers and pulled the sucker out–because I couldn’t bring myself to do it. (Interestingly, William was completely calm the whole time.)

Over the next few days, several more ticks appeared–to my stomach-turned, blood-chilled dismay. There was one embedded in Clara’s bald little head. Another on Jacob’s leg. One on Will’s abdomen. I did a lot of shrieking and flapping my arms around (people who hate creepy-crawlies, I know you know the move I’m talking about.) For a horrible moment while giving him a bath, I thought I saw a tick on Owen’s testicle, but it turned out to be a seed from a buckwheat pillow instead. (Whew!) And the final straw: while reading in bed, I scratched my back and felt a “crunch” where there was definitely not supposed to be a crunch. Jon was out of town, so stomach lurching, I called Melissa and then knocked back two glasses of wine while waiting for her to come over and yank the bloodsucking critter out. It was the only way I could think of to keep myself from running through town screaming and tearing my clothes off.

That was nearly 16 months ago, and I have not returned to the nature center. Until today. I kept telling myself I’d go back, but the very idea of finding another tick on me or one of the kids kept me away. Surely they’re getting enough nature just hanging at the playground…I knew I was being silly, but couldn’t quite talk myself into making the trip again.

But when Jenna suggested a trip today, I knew I had to feel the fear and do it anyway. The weather was perfect. The summer’s nearly over. I want my kids to love the woods as much as I do. In short, I needed to get over myself. I went a little heavier on the Deep Woods Off than usual and insisted that the kids wear long pants, socks, shoes and hats, but we went. And of course, had a great time.

There’s a lesson in all this. A tick could show up. Maybe not today, maybe not tomorrow, but soon, and it’ll have to be dealt with. But such is parenting, right? For some of you the tick is a metaphor; something you fear but know that at some point you have to embrace. Maybe it’s letting your three-year-old spread his wings a bit and attend preschool without hovering outside the classroom door the entire time in case he decides he misses you. Maybe it’s handing your (licensed) teen the car keys and sending him off to run an errand…solo. Or maybe it’s getting on an airplane with your five kids and heading to Disney World even though you’re terrified of flying and are sure having all seven members of your family on one plane at the same time is just tempting the fates (that would be me in November). Maybe it’s confronting your son’s school administration over a policy you hate, even though you’re scared of confrontation. Or maybe it’s taking the risk of looking like a fool while coaching soccer because you know your daughter would love to spend more time with you. 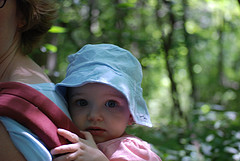 this moment: worth a possible tick encounter, yes?

We’re all scared of something. For me it’s ticks (and planes. And, okay, I still don’t love groundhogs that much). But part of happy parenting is facing those fears and deciding which ones are holding you (and your kids) back from living the fullest, happiest lives possible. Because at the end of the day, everything is a risk. But some are worth taking.

And I say that even though I’m pretty sure I just felt something bite my left shoulder.