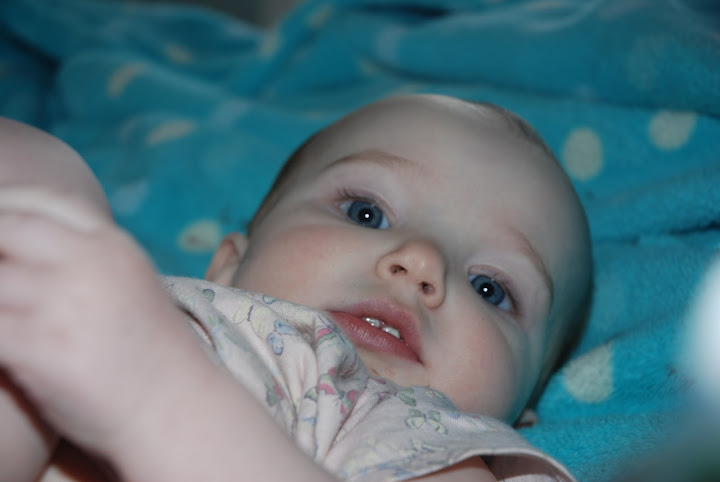 Clara, waiting for a fresh behind

This morning I changed a diaper. What else is new? As a mother of five fairly closely-spaced children, I’ve spent the last nearly-thirteen years changing diapers: in the early morning, the mid-morning, noon, afternoon, evening, and night, and sometimes in the middle of the night, too. I’ve changed thousands and thousands of diapers. You’d think I’d find this depressing, right? After all, diapers are usually listed with a host of other mundane parenting tasks we’re not supposed to like.

But there’s nothing that unpleasant, really, about changing diapers. Sure, it gets kind of old having to think about it all the time (calculating how many diapers to pack when we go out; remembering to have wipes stashed in my purse, trying to decide whether to change the hour-old diaper on the baby that fell asleep earlier than you expected or just hope it lasts through the night). And I don’t exactly relish the really messy poops that seep into every roll and crack or have to be practically scraped off the child’s rear with a butter knife.

Still, your average, run-of-the-mill diaper change, can be rather pleasant if you think about it (or rather, don’t think too hard about it). The process of laying a downy-headed baby or chubby toddler down on his back, maybe blowing on her belly or kissing his forehead or pressing the sole of her foot to your nose and babbling nonsense (no wonder Clara refers to her feet as “stinkies,”) swapping out the soiled or wet old diaper for a fresh new one. It’s a task with a definite ending, a small, but satisfying feeling of accomplishment as your baby toddles away with a fresh, dry bottom. I find it comfortingly repetitious, familiar, even meditative.

(…Or maybe it’s just me. Perhaps this explains why I’m never in a hurry to potty-train.)

Over the last week I’ve been writing a lot about delegating and outsourcing to save time and energy. Let’s face it: each of us only have so many hours in a day, and if we let it, our to-do list could easily overtake all of them. This is why I think identifying your core competencies is a good idea: if you know what you enjoy and what you’re good at, it makes sense to dedicate the bulk of your day to those things. The natural result is that some of the things you don’t enjoy, that you don’t need to do yourself, or that aren’t a good use of your time must fall away to make space.

I believe, though, that there’s danger in taking the “delegate and outsource” mentality too far. All of our lives are full of mundane details, and it’s becoming easier and easier to hire them out or sidestep them. Should we, just because we can? Or is there inherent value in spending hours learning to make artisan bread even though I could just buy a loaf for a few bucks, learning how to carve a turkey even though Thanksgiving is only once a year and I can easily pick up a pre-carved bird, or doing the dishes myself once in a while instead of always passing the task off on my big kids?

Of course, anyone would argue that you should absolutely do those things if you enjoy them. The trouble is, you might never have a chance to find out if you enjoy certain activities if they’re so easy to avoid you never actually try them. Or you might miss an opportunity to find the pleasure in some “unlovable” task. Can an activity have value even if you’re particularly good at it, even if it’s not profitable, and even if it’s not the thing you enjoy doing most? (Diaper changes, by the way, do not meet any of those criteria for me.)

I’m reminded of the couple who hated making school lunches so much they drew up a contract to divide up the labor between them. Talk about your first-world problem! And yet, is it really even possible to hate something so simple as preparing a school lunch? Or is it the obligation they hate; the expectations, the over-complicated ‘rules’, the use of their time for something they deem menial and beneath them?

I also know it’s dangerous and disingenuous to glamorize the “good old days” before modern technology made us all, well, kind of wimpy. My grandma, in her mid-80s, grew up poor in a mining town in Michigan’s Upper Peninsula. Her mother died when she and her sister were toddlers; her father’s second wife had ten more children and the family lived in poverty in an isolated, rugged landscape punctuated by long, harsh winters. Life was chamber pots and laundry on lines. As a young woman, Grandma lived in a tuberculosis ward where they tried experimental treatments (this is before antibiotic treatment for TB was widely available) for two years, while my mother was cared for by family friends. Her husband built their first home by hand.

While Grandma talks of her toughness and the toughness of other people of her generation and background, with admiration, pride, and a certain grudging nostalgia, you don’t see her ditching her dishwasher, washing machine, and toilet with the squishy seat to go live in a cabin with no running water and an outhouse. She knows that her grueling young days shaped her into the tenacious old lady she is. That doesn’t mean she wants to return to them.

On the other hand, I love my dishwasher, but that doesn’t mean I never want to plunge my hands into a sinkful of soapy water and do it the old-fashioned way. Some days, laundry is a thorn in my side. Other days, folding small t-shirts feels like a pleasant, quiet way to spend a half-hour. The challenge is striking a balance between streamlining my life to make room for the “bigger” things while still leaving room for the quieter pleasures. Like the quiet, boring, yet strangely joyful little diaper changes that punctuate my days.

We now have a sitter coming most school mornings. She arrives early, just after Clara wakes up. I could easily pass the task of the first morning diaper change to her, while I do something even more enjoyable, or more “important”, or something I’m better at, or something that earns money.  But I haven’t. For some reason, I’m hanging on to those few moments of the morning routine. I do it because I believe those small quiet moments count just as much as the large loud exciting ones. I do it because even though it doesn’t add to the gross domestic product and Clara likely won’t remember it later, it matters to me that we had that moment. I do it because it needs doing, and there’s something to be said for doing the things that need doing, even if they aren’t exciting or glamorous or lucrative.

How do you strike a balance in your life between the large and small tasks, the things that make sense “on paper” and those that feel right to your soul? Have you ever learned an antiquated skill just to see if you could, or held on to a task you could have delegated simply because you got a small amount of satisfaction from being the one to perform the task?