Today’s post is brought to you by guest writer Tragic Sandwich. If you missed her first post on lessons learned from new motherhood, you can read it here. 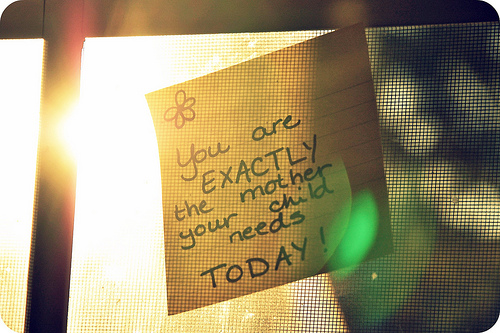 Labor is hard, and after 32 hours of it, I was truly exhausted. But when the time came to push, I gave it my all. After the first push, I looked up at Mr. Sandwich and said, “I can do this.” He said, “I know you can.” And I said, “No, you don’t understand. I can DO this.” Because he may have believed in me, but until I got there, I wasn’t so sure.

Two hours later, my doctor said, “Here’s where we are. You can have a C-section now, or you can push through three more contractions and we’ll use suction–but if the baby isn’t out then, we do a C-section no matter what.” Then he paused and said, “How are you feeling?”

I knew the answer I needed to give him: accurate and honest, but demonstrating that I was capable of evaluating my own status. So I said, “I’m exhausted and disoriented, but I understand what you’re saying, and I want to keep pushing.”

Nursing was hard. So hard it drove me to tears on many occasions. So exhausting, and so unproductive, that I would pump all day to produce an ounce of milk. The nonstop schedule and the assumed guilt that somehow I was failing to provide for my child ground me down even further. In the end, though I found I had the strength to realize that what my daughter needed was food, and me, but not necessarily food from me. And all along, she’s been a thriving, active little girl.

I have had the strength to stay up all night when she was sick, and to endure the process of crying it out–and the strength to determine that while that technique may work for some, it didn’t work for Baguette or for us.

But most of all what I’m struck by is my physical strength. There have been any number of points where I’ve thought, “She’s getting so big. I don’t know how much longer I’ll be able to carry her.” But as she gets bigger, I get stronger, and I can still carry her. And I love that, because I won’t always be able to–but I’m so glad I can now. (Yes, she walks plenty–never fear!)

We’ve been lucky that, so far, we’ve not had to face real hardships with her, but we know those can come without warning. And we trust that if they do, we’ll find ways to support her and each other in whatever ways are needed.

Baguette is a strong little girl. She needs a strong mommy. And I’m so glad that I can be that for her.

How are you strong for your children?

Tragic Sandwich is a 40-something mom to Baguette, a rambunctious toddler who loves adventures. Together, she and Mr. Sandwich are making their way through the world of first-time parenthood.