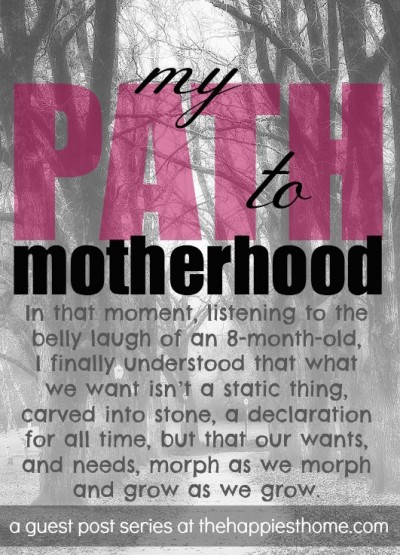 Sixteen years ago, I labored and Lamazed and my first tiny child squawked his way into the delivery room, making his sunny-side up entrance into this world. My world changed that day, and then it changed again and again, in ways I never would have imagined in back when I was young and guileless and selfishly happy.

But let’s back up, because really, the biggest change happened a few years earlier, while I was doggedly climbing the corporate ladder in Seattle.

Everything about the Seattle years was lovely, despite the rainy season. The outdoors call to every resident and my new husband and I dove right in. We hiked and biked and explored the magnificent coastline of the great northwest. We reveled, too, in the excitement of being downtown, spending Saturday nights at the Trattoria, our favorite restaurant, drinking red wine, eating too much pasta, and contemplating the future. It was a magical time, and I was happy.

And then, one by one, it happened: our friends started having babies.

First came baby Jeremy, to mom Cathy, an organized, homemaker type. Next Penny brought home little Elizabeth, the first of many siblings, whose laid-back nature duped us into believing that babies weren’t so hard after all. And then came Zachary, my friend Jill’s son, a chubby, beautiful cherub who drew me in in a heartbeat. He gurgled and my heart flipped. He smiled at me with those gorgeous big blue eyes and my heart flopped.

Try to understand, for a moment, what a sea change this was for a young corporate girl who thought she’d spend her life in cities and offices and leave the diapers and dolls to other women. Don’t misunderstand—I liked children, I just wasn’t sure I wanted my own. The past few years had been so fulfilling: my marriage was good, my career was advancing, and I had both the time and money to pursue other interests. Giving birth wasn’t in my plans.

But here I was, unexpectedly under baby Zachary’s spell. The baby bug bit me and that darn thing wouldn’t let go. It following me to meetings and conferences and fancy dinners out with clients. Suddenly I noticed the proud parents sharing newborn photos and comparing notes on the newest line at Gymboree. One late summer afternoon my boss’s wife brought his four adorable girls into the office, with their coordinated outfits and curly blonde hair. As they giggled and hugged their dad, I nearly melted at the beauty of it all.

I wanted a baby of my own.

Broaching the subject with my husband was difficult, but not because I thought he’d disagree. I was fairly certain that he’d embrace the idea enthusiastically (he did). Instead, it was difficult because confessing my new desire was essentially admitting I’d been wrong: I hadn’t really known what I wanted, after all. This realization was incredibly powerful and informs my parenting even today: What you want today may not be what you want tomorrow.

On that hot August day when the doctor announced, “It’s a boy!” I nearly wept with joy. His eyes were grey, his hair was barely there, and his tiny lips were perfectly pink – the top one arched like the Golden Gate Bridge. I was smitten.

I’d like to airbrush the next twelve weeks, the ones I took off from work to get to know this precious baby boy, and tell you that I loved being home with that him so much that I couldn’t envision anything else. But the reality is that I was more than tired; I was exhausted. A chronic overachiever, I struggled to get to the grocery store. I labored to get dinner made. I couldn’t get a shower, for goodness sakes. I was frustrated, humiliated and more than a little defeated. I welcomed a return to the office.

But then. Then he got a little bigger. He outgrew his colic. He could even sit up all by himself in the tub.

And it was the tub—or, more specifically, his bath—that changed my course.

One defining day, I sat typing in my home office and heard my son splashing and laughing as the sitter scrubbed his tiny toes. My heart strained. Suddenly, fiercely, I wanted to be in there, watching him smile and blow baby raspberries. I wanted to wash his fuzzy little head and scoop him into his soft white and blue blanket with the built-in hoodie, just his size. I wanted to snuggle up with him afterwards, and read Goodnight Moon or Good Dog, Carl, or any one of the bazillion board books he loved to touch while I sing-songed the words.

And in that moment, I realized that I wanted to stay home with him, despite the fact that the entire first part of my young adult life had been dedicated to building a career. In that moment, listening to the belly laugh of an eight-month old, I finally understood that what we want isn’t a static thing, carved into stone, a declaration for all time, but that our wants, and needs, morph as we morph and grow as we grow.

I quit that job I loved, and my boss was both stunned and supportive. Shortly thereafter, he hired me on a consulting basis, bless him, which gave me an outlet for my professional ambitions while allowing me to choose work on my own terms. During the years my children were young, I had a mix of work-life experiences. Some years, I consulted; others I didn’t do any outside-of-the-home paid work; one year, I began freelance writing; another, I wrote a book. Every step I’ve taken has reinforced that early lesson: that tomorrow’s wants and needs will very likely be different from today’s.

Being cognizant that my kids’ wants, needs, and ideas will change over time helps me be a more compassionate mom. I was such a driven young woman and I derived so much fulfillment from my work that it blinded me to other possibilities. Knowing that helps me empathize when my high-school aged son can’t understand, for the life of him, why I don’t want him to take four AP classes in one year. He’s driven in his own way, and he’ll learn in his own time.

Even more, when my children stumble, when they make not-so-great choices or voice an opinion with which I strongly disagree, I want to support them through the consequences, listen without judgment, and wait for understanding. Because I believe that they have years, many years, to discover who they really are and what they really believe. And their mistakes present a wonderful, if painful, opportunity to grow. And as they grow, I hope they give themselves plenty of grace, and permission to change their mind as well as their plans, no matter how old they are.

Kirsetin Morello is a freelance writer who writes for a variety of websites, companies, and magazines, including Parents, Thriving Family, and Teach & Travel. Her first baby drives a car now, which adds a whole new dimension to parenting.