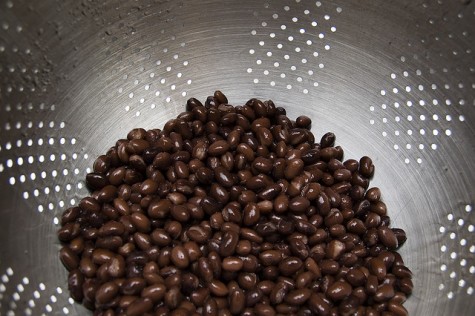 You know feeling you get when it’s 6:00 and you’re standing in front of the fridge realizing you have no idea what to serve the hordes of ravenous vultures circling the kitchen (what, just me?)

In times like these, everybody needs a fall-back staple item or two–something that’s easy, reasonably nutritious, that the kids like, and that you could make in your sleep. For me, that go-to food is black beans.

When I was pregnant with #3 and working full-time, I’d often come home exhausted and starving at the end of the day. I needed something with protein that didn’t require a lot of cooking time; something I could stock up on weeks in advance and always have around the house just waiting to be cooked. Though I’d never prepared my own black beans, they didn’t intimidate me the way meat did. They were just beans, after all. What could go wrong?

So I tossed a can of beans in a pan and went at it. Fifteen minutes later I was eating a delicious taco salad. My pregnant belly was happy, and gasp–even the kids ate it!

Over the years I’ve made black beans so many times that it’s become a no-brainer: it takes me about 5 minutes to prepare beans, they’re cheap, and they’re really nutritious (jam-packed with fiber and protein and a good source of vitamins and minerals.)  Kids love them because they’re small and unthreatening, and the texture is smooth and palatable (not gritty or too mushy.) Plus, they’re versatile: once you’ve cooked up some beans you can toss them in a quesadilla, on nachos, in a salad, on a taco, in soup…the list goes on. I’ve even been known to serve a plate with a little pile of beans, a little pile of rice, and a little pile of corn and a tortilla and let the kids decide how or if to mix it all together.

Over the years I’ve experimented with different spices and flavorings, until I finally settled on my favorite recipe. Here’s how I make them (keep in mind I don’t really measure when I cook–using my terminology, a “glug” is probably about a tablespoon; a “shake” is probably about 1/8 tsp.)

1. Dice the garlic (you can also use prepared, already-diced garlic; it comes in a jar and sits in your fridge until ready to use.) If you’re an onion fan you can also

2. Pour the beans in a colander to drain; give a quick rinse.

3. Heat up a few “glugs” of olive oil in a skillet over medium-high heat.

4. When the oil’s hot, add the garlic and saute until browned. Watch it closely, garlic goes from golden to burned fast! If you want to use onion too, add that first and let it cook a little before adding the garlic.

5. Turn down the heat to medium-low, add the black beans, give it a few stirs

Stir around for a few minutes until everything’s blended and the beans are hot. Salt to taste. You can let it simmer for a while while the flavors meld, or if you’re really in a hurry, just remove from heat…and eat!

You can easily tweak or add to this recipe. Try throwing in a can of diced tomatoes; mix in strips or chunks of red pepper. Smash them up with avocado chunks. Get creative! To me, what really makes these beans sing is the lime juice and the cumin. But feel free to experiment with other spices or flavorings. It’s really hard to mess up beans–worst-case scenario, rinse them off and start again. And they’re so cheap, you can afford to experiment a bit.

What is your last-minute, go-to, cook-in-your-sleep recipe?

I can’t believe we’re more than halfway through FOOD month here at The Happiest Mom! I feel like I have so much to say on the topic, I’m not sure I’ll be able to get to it all. This week I want to talk a little more about preparation and planning and the Six-Meal Shuffle; next week I plan on tackling picky eaters (well, not actually tackling the picky eaters themselves) and of course we have to cover budgeting, grocery shopping, and cooking skills in there, too–as well as Thanksgiving! Got a topic you want to see me cover in the next two weeks? Let me know!