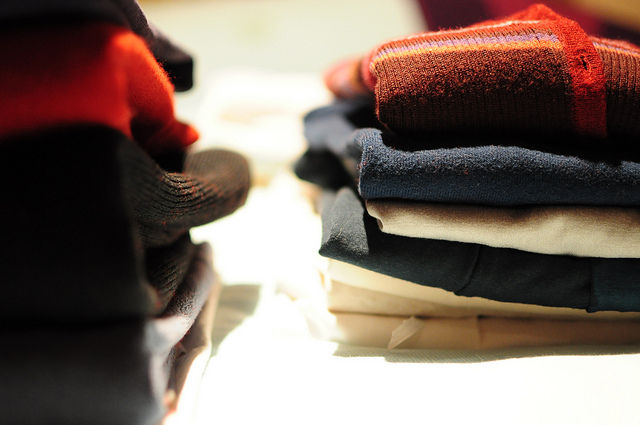 As I write this, a jumble of jeans, shirts, and those elusive clean socks, warm from the dryer and exuding the sort of soapy/outdoorsy smell that can only be generated in a laboratory, is piling up by my feet at the foot end of my bed. It’s been hectic around our house lately, and with my impending book launch I’ve been delegating the tasks of running loads to and from the basement to my husband and kids.

Sure, it wouldn’t be too much to ask someone else to deal with the clean clothes too, but one task I cling to – that I’m loathe to give up during all but the most desperate times – is that much-maligned chore: doing the laundry. And even when my work load makes it difficult for me to do the whole job myself, I still insist on being the one to fold all those jeans and shirts and towels.

I know that might sound crazy. As a working mom of many, I’d be more than justified in sweeping this task off my plate forever, and I’ve definitely got the workforce to take over the job. As a mother of teens, it’s even been suggested to me that I’m doing my bigger boys a disservice by washing their clothes for them.

I don’t disagree that being versed in laundry basics is a necessary life skill, and my boys definitely know how to load and start the washer, run the dryer, fold and put away. It’s just that I rarely – almost never, really – ask them to do it.

Part of the reason is purely practical. To my way of thinking, in a large family taking an “every man for himself” approach on certain tasks just doesn’t work. Imagine if every time I wanted to put in a load of towels there was a chance that one of our kids was hogging the machine with a hoodie and two pair of jeans? We don’t have that many clothes to begin with, so it makes a lot more sense to do communal loads frequently as the basket fills than to wait until a single person gets a big enough load to justify running the washer.

But why does the job have to fall to me? Well, that’s the trickier question, isn’t it?

First of all, I honestly don’t mind folding the laundry – it’s kind of mindlessly soothing, and gives me an excuse to take over the entire sofa – and the remote – for a while. (It should be noted here that I do absolutely despise putting clothing in drawers, so every kid has to do that job him or herself.)

Earlier this week, though, when I was catching up on a backlog of kids’ shirts, it occurred to me that I love folding laundry for a less practical reason that has nothing to do with efficiency or House Hunters International.

Rather, it’s because the task of folding the laundry – of laying my hands on each piece of clothing, of making physical contact with the jeans and the shirts and the hoodies and the leggings and the skirts and the socks and even the funny little boxer-briefs that cover my children from day to day – helps me feel more in touch with them, with their growing and their changing and their simply being.

Ah, here’s Owen’s favorite shirt. It’s looking a little threadbare, isn’t it? I guess he can get a few more wearings out of it. Sigh – that was Isaac’s favorite shirt, too, and William’s. But William grew so fast at that age he barely got to wear it!

Speaking of growing, I’m not sure Isaac is going to fit in those size 16 jeans much longer – he’s got an inch of ankle showing when he hikes them up. I suppose I can pass down a few of these size 18s from Jacob, but that means I’ve got to get Jacob some new jeans. He’s probably ready for men’s sizes now…

Oh no, these red polka-dot pajamas that passed down from Jacob to Isaac to William to Owen to Clara finally have a hole in them! I guess I’ll let her wear them one more time, then tear them up for rags.

Haha, these little boxer briefs are so funny!

So goes my inner dialogue while I shake out and fold, fold and stack. And though I’m not actually touching a child, the clothes feel sort of like a fabric stand-in – a way to groom the kids, and fuss over them and mother them a little, if only by proxy. (I used to roll my eyes at the mothers of grown children who do their laundry when they visit. Now? I get it.)

Sometimes my house feels like a whirlwind of growth and change while increasingly long and lanky bodies orbiting around the kitchen, the sofa, the dining-room table. My boys hold still long enough for hugs, but leave the room so quickly I barely have time to register what they’re wearing, whether their jeans are too short, or whether their favorite old sweatshirt is getting ratty around the cuffs. Strange as it might sound, folding their laundry is a way for me to take some time to think individually about each child, to make sure he has what he needs, to register exactly how big she’s getting, the proof right there on the label.

As a mom I know one of my most important jobs is knowing how and when to delegate. We can’t do it all, and passing off the chores we can’t or don’t want to do is just smart home management. But just as one side of me wants to be efficient, to delegate, to be productive; another side of me loves to nurture and to be of service to my family. Folding the laundry – with its tactile pleasures and calm routine – is just one consistent way I’ve chosen to express that side of myself.

Moms, it’s smart to delegate. Don’t ever feel bad about asking your kids to pitch in around the house – you’re doing them a favor by teaching them to contribute to a household and care for themselves and others. But if there’s something you love being in charge of? Don’t apologize for clinging to that task. There’s plenty of work to go around  – you are entitled to be a little controlling about some small piece of it.

In my case, that piece is the laundry. The gentle rhythm of shaking out shirts warm from the dryer, the satisfaction in churning out a pile of perfectly folded towels. Of handing a clean, tidy stack of clothes to the children, one by one, and knowing that though there is much I cannot do for them in life, this is one small thing I always can. Maybe something that, in some small way, I always will.

We all have those tasks, I think, that we secretly enjoy even when we’re “supposed” to hate them. The jobs that, to us, don’t feel like a burden, time-consuming though they may be. For me it’s folding the laundry. Maybe for you, it’s baking from scratch or caring for a sick child.

Either way, it’s about more than the laundry or the cookies or pressing a cool washcloth to a hot forehead, isn’t it? It’s about the experience of motherhood, the caretaking that lasts beyond the baby years. Feeling needed is a good thing. Being in service is satisfying. Nurturing can be a gift.

In our eagerness to be efficient, let’s not feel pressured to delegate the little – yet important – things away.