Last weekend the kids, Jon and I headed a few hours south to Indianapolis, where we were very graciously hosted by the Indianapolis Convention and Visitors Bureau. As a travel writer I have a lot of opportunities to visit places with my family in order to research them, and then get paid to write about them, which of course, is great. But media trips have a downside, too. I always feel a lot of pressure to see as much as we possibly can of every area so that I can explore all potential story angles.

Our kids have been surprisingly game. We’ve gone on some whirlwind trips, like a three-day tour of Door County, WI, and a five-day excursion through Northern Minnesota and Minneapolis a few years ago (I wrote the linked articles, and yes, we really did–as a family–visit every one of the attractions covered).

But our trip to Indianapolis last weekend turned out a bit differently. We were excited when we arrived at our hotel Friday night, a spanking new Staybridge Suites. Our suite included a separate bedroom and bathroom for the boys (they always get a huge kick out of that) and after a swim in the pool, we all went to bed with high hopes for a jam-packed Saturday.

But then Jacob woke up at 4 AM with an earache, and stumbled around the hotel room moaning and groaning and falling asleep in various places (such as William’s bed while Will was up going to the bathroom, which led to a teary fight, which woke up Clara). Finally at 4:30 or so Jon headed out in search of a heating pad and some Ibuprofen, while Jacob snoozed fitfully on the sofa and I tried to get Clara back to sleep.

So our steps were a bit less-than-springy Saturday morning as we headed to the Indianapolis Zoo.  Our planned itinerary was full but–on a good day–manageable, including leaving the zoo at 1:30 to make quick stops at the White River State Park, the Indiana State Museum, the Rhythm Discovery Center, and the Eiteljorg, a Native American/Western museum.

But that ever-elusive time? Well, it got away from us. When we stopped to eat lunch in the zoo, the kids made a beeline for the playground. Yes, it was very tempting to me to point out “You guys, we have a playground three minutes from our house! We can go to the playground any time!

Later, when we passed the splash park and the kids begged to play in it, it was very tempting to say “You guys, we are on a schedule here! We have a splash park within walking distance of our house. And besides, you aren’t even wearing swimsuits!” 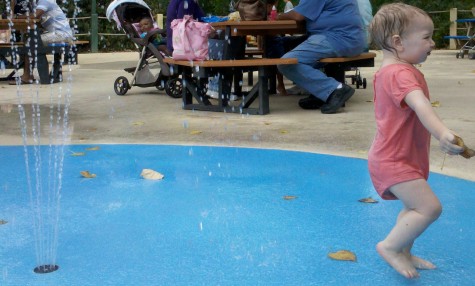 Clara at the Indianapolis Zoo

And then, when we finally made our way out of the zoo—several hours after our schedule had indicated—and the kids started begging to just go back to the hotel and hit the pool, I was quite tempted to say “You guys! We aren’t here to swim in the pool. We’re here to sightsee! We can swim any time!”

Once again, though–thankfully–I didn’t. And we all had a blast.

Sometimes kids know what we adults don’t: when you’re on vacation and there’s a playground in front of you, you play. When a splash park presents itself, you remove your shoes and jump in. When there’s a hotel with a pool, by God, you slap on your floaties and get in that pool. Because it doesn’t really matter that you “could always” swim or splash or slide later. What matters is that you make the absolute best use of your time right now. And sometimes, some days, the best use of your time is enjoying the familiar fun that’s in front of you rather than chasing down fun somewhere else.

My kids are good at teaching me those lessons.

As it turns out, after a leisurely evening in the hotel pool and an early bedtime, we were all fresh and energetic Sunday morning. We romped all over the Children’s Museum of Indianapolis, digging for dinosaur bones and learning about Egypt; checked out ancient rocks and fossils at the Indiana State Museum, stuffed ourselves with delicious omelets and waffles in a busy downtown restaurant, Cafe Patachou, and huffed and puffed our way through the White River State Park’s canal-side paths on a 7-passenger surrey bike (Yes. All seven of us got in the same bike. I can only describe the scene as “a hilarious, yet sweaty tourist dweeb-a-thon”.)

My mother-in-law took the kids home Sunday evening so Jon and I could attend the Colts game and have some time to ourselves, so on Monday morning we visited the Eiteljorg and the Rhythm Discovery Center. And while checking out the stagecoach exhibit at the Eiteljorg and playing the bongos at Rhythm Discovery Center, I did feel a bit of a twinge: “Oh, the kids would have loved this. I wish we could have fit this in earlier.”

But you know? Sometimes you just can’t fit it all in, or at least not with grace, humor and fun—and that’s a lesson my kids have taught me more than once. There will always be one more place, one more thing we could have seen or done or tried.

In the end, I figure all we can do is make the best of each experience as it comes to us: whether it’s the new and novel, or the tried, true, and time-tested…like a dip in the hotel pool.

What has traveling with your kids taught you?