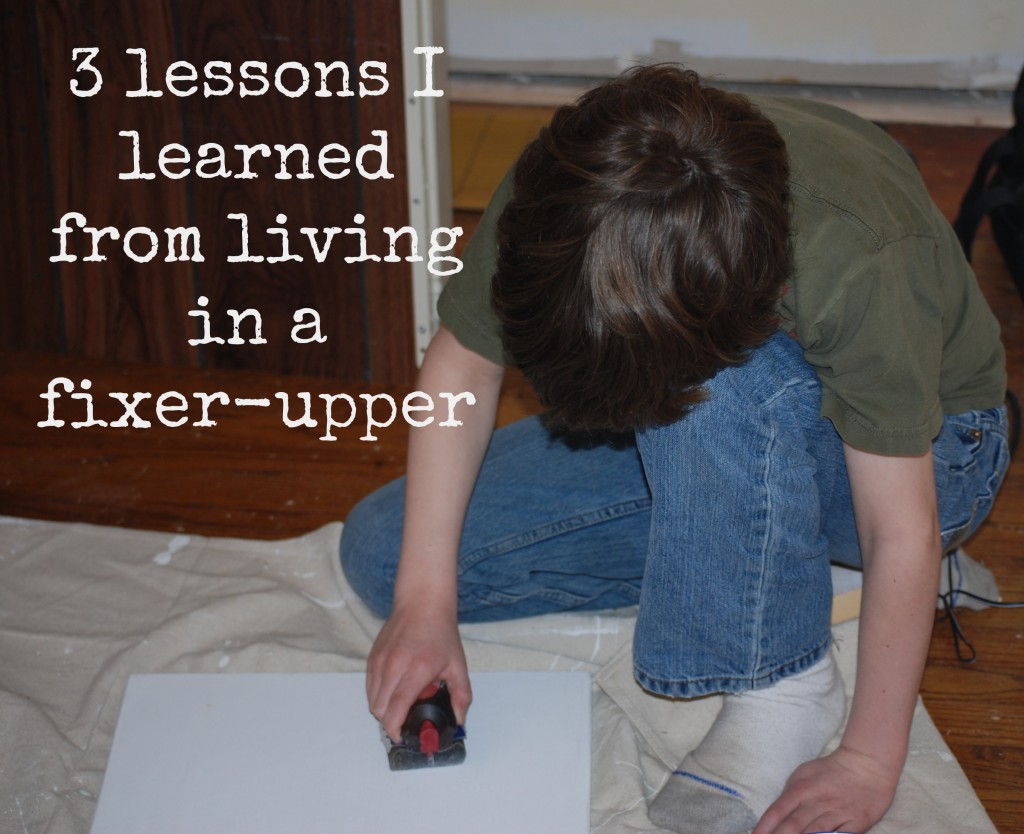 When we moved into a fixer-upper home about five years ago, we had big dreams.

And why not? The big, cream-colored Victorian held a lot of promise: the peek of hardwood floors under layer upon layer of cheap rental carpet, scuffed vinyl and old linoleum; wood trim, high ceilings. Formerly a five-bedroom single-family home, it had been converted at some point into a duplex, but we figured that with five kids, having two kitchens wasn’t such a bad thing.

We had more time and energy than budget for renovations, but we made a lot of progress those first two weeks. Jon took time off from work, and family and friends showed up to help us tear up flooring and paint. Jon tore out trim and took it to the garage to re-paint, while I scrubbed grout and tile within an inch of its life.

It was exciting. It was exhausting. And by the time the third week rolled around, our initial burst of enthusiasm was pretty much extinct.

Jon and I both had to start working at our jobs in earnest again, at some point we knew we’d have to start sitting down for dinner again (even though the dining-room trim wasn’t re-installed yet) and the kids had to have a place to play. It was time to mop up the dust and create a home out of an imperfect house, even if half the projects we’d started were still incomplete.

In short, it was time to start living in our home, not just fixing it up. And when every single room in your home has something major that needs to be done to it – and you’re trying to DIY each project as money and time allow – that’s easier said than done.

So what wound up happening is what, I have come to understand, happens to many families who move into fixer-upper homes: we burned out, and at the same time, tuned out. We stopped noticing the fact that our living room and dining room had no baseboards (they were still awaiting that fresh coat of paint out in the garage, you see.) When the summer temperatures soared and it became apparent that the room we’d meant to turn into Jon’s office had once been the lodgings of an incontinent cat, we shut the door and vowed to deal with it later.

And at the same time, expenses we’d never anticipated started piling up. A few months after we moved in, our retaining wall slid down the side of the hill behind our house to the tune of $4500. Our furnace went out. We discovered that our chimney was crumbling. The driveway needed to be repaved and the garage had to be reinforced. Boring, unsexy, but ultimately very expensive projects sucked up both our renovation budget and our optimism. 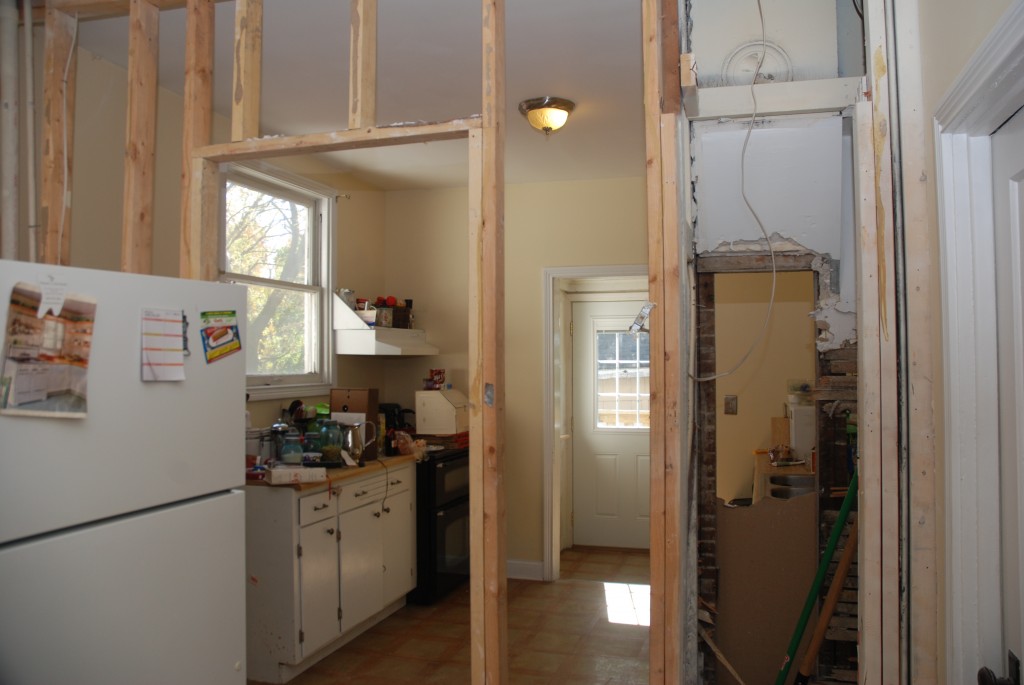 Operating without a functional kitchen during our renovation

That’s not to say we made no progress. We mostly DIY-ed a kitchen renovation that turned out surprisingly well, and some of the little touches I added to the house – new light fixtures, art, area rugs – made a big difference. But three years after we moved in, we began realize that we’d gotten in over our heads. The house had huge potential, but it needed different owners to take the lead…hopefully with a large budget to wipe it out all at once.

And that realization felt like a huge failure. Why couldn’t I be more like one of those DIY bloggers I’d been following who managed to scrape paint, swing sledgehammers, and refinish dressers with toddlers playing happily in the background? Or the reality show family whose kids were actually DIY-ing a renovation right alongside their parents? (See the top photo of my son Isaac sanding? To my memory that was the first and last time he picked up a tool.)

With the benefit of time – and after more than a year in our new home, which doesn’t need any fixing up – I’ve realized a few things about myself and our family that have shed new light on our renovation flop. Maybe you can identify with one of these:

1) I’m better at nesting than renovating.

I assumed I would embrace the DIY lifestyle because I am a nester at heart – I love to move furniture around and use textiles and accessories to make a home a cozy, comfortable reflection of our family life. But as it turns out, the instincts that make me a natural nester actually worked against me as a renovator. Tearing down walls and creating mess and dust made me uncomfortable and anxious: I tended instead to try to find ways to work around what we already had.

A gifted renovator has the vision to see how a house could be after all that mess and dust – I just wanted to make things “nice enough” as quickly as possible. At first that felt like a failure to me, but I can see now that it’s a pretty natural inclination when you live with a bunch of small children.

2) There’s something to be said for simplicity.

Right now we’re renting a very nice house that we probably could not have afforded to purchase, especially after  the way our fixer-upper experience drained our bank account. But while a small part of me longs to own a home again and wonders if we’re “throwing away” money on rent, a much bigger part of me feels nothing but relief at the simplicity of our lives. Now we just call the landlord if something breaks, and there’s also less of a feeling of needing to “fix” things that we aren’t thrilled with.

For example, I am not thrilled with the pumpkin-colored paint in our current dining room or the dated green laminate countertops in the kitchen, but I can live with it, and for now, that’s all I need to do. The simplicity of our current situation has allowed me to delve back into the home-decorating activities I’ve always loved, like looking for antiques and displaying family treasures. We will consider buying again in a year or two, but whatever we decide, I’ll be keeping simplicity in mind when it comes to any possible renovations.

It’s not my dream kitchen, but it’s a perfectly nice space for me to putter.

When we bought our fixer-upper, we had a toddler and a preschooler in addition to three school-aged kids. Jon’s business was taking off and my blog was in its infant stages. Our lives were fairly complicated, and adding a house full of projects just added a sense of chaos and a feeling that we could never really rest. What were we thinking? I don’t know – I think we’d gotten so used to life being sort of hard all the time that adding on a major renovation just seemed like more of the same.

But the fact that we weren’t able to see the various projects through doesn’t necessarily mean that we’re DIY failures: the stage of life we were in just didn’t allow for the kind of focus, consistent progress, and financial investment that the house needed. As proof? The retired couple that purchased our fixer-upper threw themselves – and, I’m guessing, a sizable pile of cash – into the house. Word on the street is that it now looks like a completely different home inside. I’m really happy to know somebody else was able to see the same potential we did – and actually make it come through.

As for Jon and I? Maybe one day we’ll take on another project house (though I doubt I’d ever purposely move into a home with so many issues again.) Maybe we’ll rent for another decade and not buy again until all or most of our kids are out of the house. Jon swears that one day we will live in a tiny, one-room house on a beach somewhere. (I appreciate the idea of that much simplicity, but would like at least a guest room and a kitchen.)

One thing is certain, though: I no longer feel pressured to prove my nettle as a self-reliant adult or homemaker by taking on more DIY projects than I can – or want to – do.

Yes, Pinterest and blogs are full of beautiful house projects, from kitchen renovations to interesting paint jobs. I can admire them without needing to emulate them.

And then I can go do something homey that I really enjoy, like adding to my Pyrex collection or baking banana bread.

As it turns out, there are all kinds of ways to create a cozy nest, and – at least for now – DIY-ing isn’t my way.

And after our less-than-successful fixer-upper experience? That’s more than OK with me.