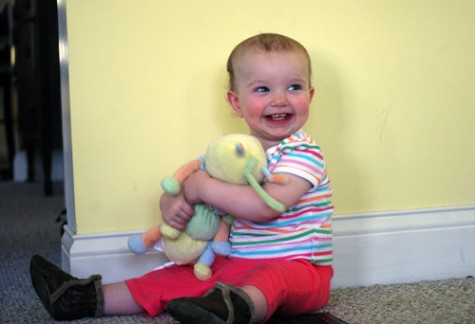 Earlier this week I was thinking about how much the season of motherhood we’re in affects our experience of parenting. For example, the rest break I declared on Monday simply wouldn’t have been possible two years ago, when I had a busy toddler getting into ev-ery-thing.

Then I remembered that almost two years ago, I wrote about that toddler experience: how it’s never been my favorite time, and how that’s OK. I’m re-posting that piece now to serve as a reminder to myself, and as encouragement to other moms who are knee-deep in a difficult parenting stage right now: It really does get better, and quicker than you might be able to imagine when you’re in the thick of it. Enjoy! A few years ago, I saw a mom with her first baby, a sweet thing of about nine months old. Nine months old is one of my favorite baby stages. A nine-month-old baby is curious and mobile, chubby and cute, and when you pick them up, they cling to you like a little monkey.

“Isn’t every age the best age?” said the beaming mother. Only too late—after I’d snorted—did I realize she’d been completely sincere. She looked at me quizzically.

“Uh, well, not really,” I floundered. “Between a year and 18 months is probably my least favorite age. And then there’s that time right before they turn three, that’s no fun either…” I trailed off, aware that the other mother looked a little uncomfortable with where the conversation was going. Who could blame her? No new mom wants to hear that she might not feel enthusiastic about her child every single day for the rest of her life.

Sometimes I think about that mom today and wonder whether she has, by now, run into some stages she’d just as soon never encounter again. Not long after our conversation, her baby entered the 12-18 month phase I so dreaded, a time of whining and grunting and getting into absolutely everything. A year-old baby is too big to carry around easily at a social event, but too little to plop down on the floor. A 15-month-old baby is old enough to know exactly what he wants, but usually too little to tell you what it is. An 18-month old baby has developed certain opinions about the world, from what she likes and dislikes to whether or not she’d like to be buckled into her car seat, and woe to the person who tries to convince her otherwise. They’re all impulse and ability with no self-control or reason.

I know mothers who get bored with newborns, looking forward to a time when their baby will be walking, babbling, and interacting with them more. Other moms admit that they aren’t “baby people” at all, and enjoy their kids most when they’re school-aged. I, on the other hand, love nothing more than cuddling and smelling and diapering a newborn baby, and feel cheated by the fact that the newborn period is gone in what feels like a blink of an eye. It didn’t help that my babies grow so fast that they barely look like newborns at one week old. I adore the sweet gurgling of a four-month-old, the big-baby solidness of a nine-month old, and the curiosity and independence of a two-year-old. It’s just that 12-18 month phase that exhausts me every time.

I used to try to hide my dirty little secret—that some stages just weren’t my cup of tea. I thought being a good parent meant loving every minute of it, and that included embracing every developmental milestone. But as I added more kids to the mix, I realized that my love affair with certain ages and stages and my aversion to others was pretty consistent from kid to kid. I think it’s a personality thing—I just mesh better with my children at certain ages than others.

This time around, I tried to tell myself things would be different. Maybe I could will my way out of my toddler bias. Clara had been a joyously easy small baby; no reason to think she’d be any different as a big baby. I held fast to that belief as we rode out the end of the first year. And then the whining began. don't be fooled. she's not happy here either.

Loving your kids doesn’t mean forgetting that you don’t care for changing diapers or endlessly washing (or losing) the spout part on a sippy cup. I smother my toddlers with affection just like my babies and my big kids, but there’s something freeing in being able to think “I love you, but your developmental stage stinks!”

At the same time, I think I did the right thing this time around by keeping an open mind. Sometimes anticipation of the thing is worse than the thing itself. I joked about the dreaded toddler months when Clara was a baby, but didn’t spend much time dwelling on how bad it might be or how crazy they might make me.

Do you have a least favorite kid stage? Do you talk about it with other moms?