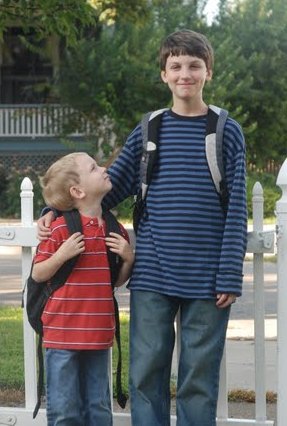 Owen and Isaac in their new JCP first-day-of-school clothes.

If I had to pick the one department store that has played the biggest role in my life, it would definitely be JCPenney. First of all, when I was growing up in Sault Ste. Marie, a small city in the remote and often-frozen Upper Peninsula of Michigan, it was really the only place in town where you could buy everything from little kids’ clothes to neckties to bedspreads. It was right in our downtown, not “anchored” to a mall (we didn’t even have a mall), and I have very clear memories of shopping there with my mother as a small girl.

I also remember when, after freaking out on the elevator at the Sears Tower at the age of four, I flatly refused to ride the one-floor elevator at our little downtown JCPenney for years. (My mother humored me until I outgrew my terror.) And we always went to “Penney’s” for back-to-school shopping.

Later, JCPenney gave me my first “real” job after I graduated high school. I worked for six months in the department geared toward older women…on commission. It was then that I learned how a “draw” against future commissions works. It was also there that I learned that when you are selling mostly elastic-waist polyester pants, you are not likely to make much of it. I yearned for a job in the much-hipper Junior’s section, but alas, the competition for those jobs was fierce and I never made it out of “misses’ casuals.” I learned to make the most of it.

In my second year of college I landed a job at the JCPenney near campus, working in the watch repair department. That was actually a really fascinating job that has come in handy several times since. That was also when I began dating Jon (who incidentally had also worked at a hometown JCPenney in high school). I have fond memories of Jon bringing me lunch and hanging around the watch-repair table while I removed links, replaced batteries and repaired straps.

Now that Jon and I have kids of our own, we still head to JCPenney with the kids every year for school shopping. It’s the one place I always know I can find something to fit every person in the family and get stylish clothes at a good price. And there is something about going to JCP that always feels a bit like coming home to me – though the store has changed a lot since I was a child, it still has a warm, friendly feeling to me and a sense of comforting familiarity.

If you hover your cursor over the American Living ad in my sidebar today, your screen might suddenly fill with photos of two of my boys and me inside an ad for JCPenney’s line of American Living clothing. Don’t worry – the enlarged ad is not permanent. Just click the little “close” tab above the box to the left, and the ad will shrink and pop back over to the sidebar. But if you have a minute to click around and interact with the widget, it’s actually very cool. You can see Owen and Isaac sporting American Living garb and check out their goals for the school year. You can also share your child’s goals for the school year by clicking the link in the lower right-hand corner of the expanded widget. If you share by 1 PM EST on 9/25, you’ll be entered to win a $25 American Living gift card.

Working with sponsors like JCPenney is one of the ways I’m able to keep The Happiest Mom active and vibrant, and as always I appreciate your support! I’d love to hear which stores are part of your regular “back to school” shopping routine – and what you remember about BTS shopping from your childhood.

Speaking of back-to-school, I mentioned earlier this week that I’ve decided to pack my kids’ school lunches this fall and am going to launch a challenge next week to encourage others to make the same commitment. I know for me the two biggest lunch-packing obstacles are TIME and PREPARATION, so I’ll be posting weekly to let you know how I’m working to overcome those roadblocks. Look for a post launching the challenge early next week!