I was a picky eater as a kid. I didn’t like anything spicy. I didn’t like textural surprises, like chunks hidden in sauces. Actually, I didn’t like sauces much, period. I liked my food plain-Jane and predictable.

I did eventually outgrow my pickiness. I grew to embrace spicy foods, ethnic foods, sauces, and new flavors and textures. But it took a long time. And I wasn’t going to get there before I was ready.

Looking back, I can’t remember my mom ever making a big deal about eating. And I’m so glad she didn’t. We were expected to make a reasonable attempt at finishing a meal, but she never forced us to clean our plates. She expected us to be polite at the table, but she well knew we weren’t going to fall over ourselves in raptures about every meal. We were allowed to pass on a small number of veggies (we each got to pick a specific veggie we were never required to eat; mine was cooked carrots) and if the meal was something out of the ordinary or strange to us, she looked the other way when we mostly just pushed it around on our plates. But mostly we dealt with our less-than-fave foods the way kids have for generations: we gulped them down between swigs of milk and bites of bread. Mom didn’t seem to get too worked up about it one way or the other: she provided good food, and it seemed up to us to figure out how we were going to consume it. 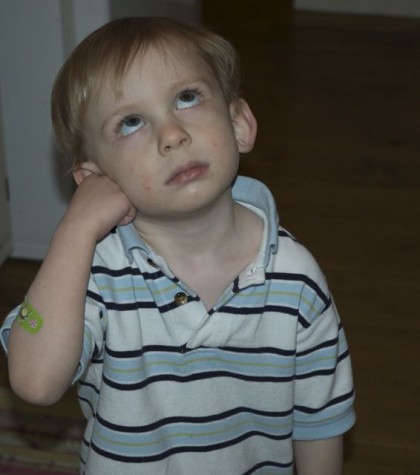 I’ve tried to carry that attitude forward with my own kids, but things seem to have gotten more complicated since my mom was raising (and feeding) us. Modern parents know so much about nutrition, about toxins and pesticides, about food allergies and sensitivities and omega-3 fatty acids and brain development and antioxidants and trans fats and chemically-engineered foods than our mothers would ever have imagined. All this knowledge has made feeding picky kids feel like a huge minefield. What if they decide they won’t eat anything green during some crucial developmental phase? What if we push them too hard…or not hard enough? What if they really only eat foods in nugget form for the rest of their lives? 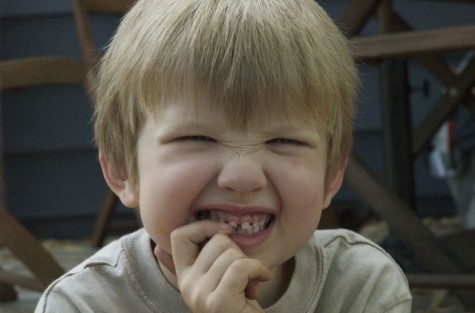 “I know you made me a plate of antioxidant-rich veggies, but how ’bout we get some fatty, salty, chemical-laden fast food instead, mmm?”

One thing that reassures me to remember is that picky kids are nothing new. Kids have been turning up their noses at green beans and gulping down carrots with milk since long before chicken nuggets became a childhood staple. At the same time, our current typical American diet is heavy on fried, processed, and heavily sugared and salted foods. It’s not good for us, it’s not good for our kids, and once kids are used to those flavors it’s really hard to get them excited about fresh cauliflower.

There are dozens of strategies for dealing with picky eaters, but here are some of the ones I’ve found most effective in my home.

1. Figure Out Your Goals

We all come to the table with different desires for our kids. Maybe you just want your child to eat a balanced diet and don’t particularly care if she consumes the same two meals over and over to achieve it. Maybe your children already eat pretty well nutrition-wise, but you want to encourage them to embrace new flavors and try new things. Maybe you’re not too worried about either of those things, but would like them to learn to be more polite about their pickiness so you don’t have to hear a chorus of groans every time you set down a plate in front of them. It’s a good idea to know which goal or goals you prioritize most highly, because chances are good you won’t be able to meet every goal at every meal.

2. Look At The Big Picture

Think of your child’s diet a week at a time, not a meal at a time. Every dinner does not have to be perfectly balanced as long as it all balances out over a few days to a week or so. If your kids snub their broccoli in favor of pasta even though you know they like broccoli, maybe it was just too much food for them to take in at one time. Try serving the broccoli for a snack later, with some dip.

What I won’t do? Stand by the stove from 5 until 7 PM every night whipping up separate made-to-order dishes. What I will do? Create meals with enough variety on one plate that everybody can find something to eat. For example, I’ll serve up spaghetti noodles with meatballs, with sauce, with butter and cheese, or with olive oil and a bit of salt (or any combination of the above.) There’s a veggie or two on the side. Perhaps a pre-made salad in the fridge for those who want one. And whole-wheat bread and milk to round it all off. Some nights, a particular child might just eat peas, bread and milk. But you know, when you think about it, that’s not such a horrible meal in the grand scheme of things.

When my kids want a pre-bedtime snack, I’ll often choose something that fills in the gaps dinner left behind–if their dinner was high on starch but low on fresh produce, for example, snack might be grapes and baby carrots. If dinner was basically a slice of bread and some plain noodles, snack might be cheese and sliced-up apples.

Since “no touching foods!” is such a common kid preference, you can’t go wrong by having ‘separate’ be the default. Put the sauce on the side. Cut up the chicken into bite-sized chunks before you put the plate in front of your child. Perception is a big part of pickiness, and if a child feels overwhelmed by what’s on his plate he’s less likely to give it a fair shot.

4. Take Advantage Of What They Love Right Now

Two summers ago all my kids loved broccoli, and we had a thriving broccoli crop in our backyard. I served broccoli with nearly every meal for a month, up until the last harvest. Nobody complained. Should I have expanded their horizons by serving more variety during that brief window? Was I somehow compromising their diet by not offering a full menu of vegetables?

Here’s how I saw it: A bird in the hand (or stomach) is worth two in the bush (or sitting on the plate.) Broccoli is a nutritional powerhouse, we had a ready supply of it in the back yard, and the kids were eagerly gobbling it up. I enjoyed the ride, and followed the “big picture” philosophy by rounding out their snacks and breakfasts with other fruits and veggies.

You can also take advantage of ‘favorites’ by gradually making them more and more healthy. For example, my kids are pretty receptive to mixing peas into their boxed Mac & Cheese. You can omit the dubious orange powder and try olive oil and salt or other seasonings instead–kids will still recognize the familiar shape of the macaroni. If they adore chicken nuggets, try this simple, fast recipe: cut strips of boneless chicken breasts, dip in a little beaten egg and roll in a mixture of Panko crumbs, salt, garlic powder and pepper, and bake on a cookie sheet at 425 for about 15 – 20 minutes. Serve with ketchup, ranch or honey mustard. It’s easier to “healthy up” a dish they already love and accept than to try to convince them to like something new.

So little Gus hates squash…today. That doesn’t necessarily mean he’ll hate it next week, or even tomorrow. Likewise, he may love green beans right now but decide he hates them in a month. Approach food aversions with a no-nonsense attitude. It’s only too easy to let Gus’s “pickiness” become part of family folklore and turn into a self-fulfilling prophecy. But if those green beans and squash just keep showing up on his plate meal after meal, chances are good eventually he’ll change his mind about them. Just don’t serve huge portions. A few beans look less intimidating and if he doesn’t eat them, you won’t have to stress about mess and waste.