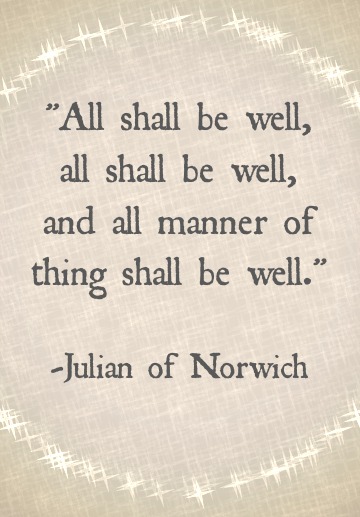 A few years ago, I had to have all four wisdom teeth removed at once by an oral surgeon. I knew the doctor would be giving me laughing gas and/or conscious sedation in addition to Novocaine, and while I definitely wanted to be relaxed during the procedure, I had never had laughing gas or conscious sedation, and didn’t know what to expect during the procedure.

In the waiting room, I cried like a baby.

A few months ago, two hours before my LEEP, I ate lunch and prepared to take the Xanax and Tylenol 3 my doctor had prescribed to relax me before the procedure. I had read a lot about the LEEP, but wasn’t exactly sure what to expect. And I’d never taken a Xanax.

My hands trembled as I took the pills.

Two weeks ago, I wrote a blog post about my then-upcoming hysterectomy. It would be the first time I had ever had “real” surgery, the kind where you are Cut Open! While Unconscious! And Organs Are Removed! I had never been sedated before, and didn’t know exactly what to expect.

As I wrote the post, big fat tears rolled down my cheeks. And didn’t really stop until the sedative kicked in…the next day.

What did these three experiences have in common?

In each, I was terrified of something I had never experienced. In each, I was afraid of giving up control, consciousness, mental sharpness and sensation via the drugs I would be given.

And each time, after the procedure was over, I said “Oh, that was it?”

That’s not to say there were no setbacks. I had a lot of pain after my wisdom tooth removal and felt pretty lousy for a few days. For the LEEP procedure, the mix of Xanax and codeine made me feel nauseous, sweaty and dizzy and I spent the half-hour before the procedure slumped over on Jon’s shoulder in the waiting room. Recovery from my hysterectomy is going pretty well, but of course there have been setbacks (like when I couldn’t remember how to pee) and yes, I was in quite a bit of pain on and off that first day.

Here’s the thing, though: when I thought about it, it wasn’t the nausea, or the pain, or the sweaty-dizzy mess I apparently become when mixing anti-anxiety medication with narcotics, that I feared. When those situations arose, I dealt with them and got through them.

It was the not-knowing that scared me.

It turns out that the actual reality of the situation was never nearly as bad as the imaginary situation in my brain, which had no shape or form and was actually just a big, blinking sign that read TOTAL DISASTER. It was as though every case I’d ever heard of anesthesia gone bad, every recovery horror story I’d ever heard or regrettably found via Google, every possible, but improbable thing that could possibly go wrong, formed into a lumpy amalgam of potential awfulness that I couldn’t even have described or defined if somebody had asked “What, exactly, are you afraid of?”

For somebody who is really calm about the sometimes-bumpy realities of life and who can deal with really crappy situations with stoicism, I certainly have a way of creating catastrophes out of unknown situations. Mostly, I’m finding, those that combine me, surgical tools and mind-altering medications.

I know I can’t be the only one, so I just wanted to write this in case it helps you deal with an upcoming procedure that’s terrifying you (or so that I can re-read it in case I ever need more surgery and need to calm myself down.)

Here are a few things that surprised me about surgery and hospital recovery:

1) Everything happened so fast in the pre-op room that I barely had time to get scared. After they put in the IV, I asked every five minutes: “You’re going to tell me before you put meds in there, right?” The anesthesiologist – who was rather dry and not very nurturing – assured me that he would, and finally asked my husband if I am a control freak. Well, I never!

In the end I was actually glad that the anesthesiologist wasn’t more warm:  it probably would have opened a floodgate of tears. I was distracted by being annoyed with him, which made the process go by a lot faster.

2) The meds were much gentler than I imagined. I had thought it would feel like I was falling asleep against my will, like the walls were closing in or the world was shrinking or something else equally Hitchock-esque.

But in reality, about 20 seconds after they put the first dose of the sedative in my IV, I felt incredibly relaxed and started blathering on – apparently I told Jon “…be sure to tell them…I don’t mind all the vagina stuff…but…” (thankfully I never got to finish my sentence, so we will never know what it was about my vagina that I wanted to share.)

I remember Jon giving me a kiss, and then they wheeled me down to the operating room. I could see the huge lights (which weren’t turned on) and thought they looked like spaceships. The nurse who was wheeling me down asked me a question, which I struggled valiantly to answer but finally, I thought – and I remember this well – “aw, screw it.” And then I was out.

The next thing I remember is somebody complimenting my haircut as I woke up – or actually, that might be the last thing I remember before falling asleep. My point is that “going under” and coming back out of the sedative felt completely natural and peaceful, and was not at any point scary.

It is strange to think what happened during the two hours or so that I was “out.” OMG, they were all up in my junk! Cutting me and taking stuff out of me and stitching me up again! How bizarre!

But you know, even when I think about it now, I feel strangely detached. I may as well not even have been there – to me, those two hours never happened. It is part of the mystery and utter magical weirdness of modern medicine, but I was amazed at how easily I have been able to accept it.

3) When I woke up, I was in some pain. But I didn’t particularly care because I was still flying high on the anesthesia and kept falling asleep mid-sentence for the next several hours.

The hospital stay was actually kind of fun. I loved the nurses and liked ordering my meals from a menu whenever I wanted – just like room service! – and cranking my bed up and down. Yes, I was occasionally uncomfortable and in pain, but we dealt with it. And it was just…well, it was just no biggie.

I know that I had a relatively minor surgery in the grand scheme of things, and that a lot of people have rougher recoveries than I’ve had so far. I certainly don’t want to downplay their experiences. But I guess what I’ve learned from this is something I’ve always known, but somehow just couldn’t seem to apply to medical situations: when life throws you a not-so-great situation, you deal.

Sometimes I hurt. Sometimes I feel nauseated, exhausted, or crabby, and I’ve been having hot flashes like crazy (apparently the surgery can “stun” the ovaries, so even though I got to keep them, they probably aren’t functioning at 100% just yet). It took me four hours to re-learn how to pee! And there could be other curve balls waiting for me. But I get help when needed, and life goes on.

When I posted to our Facebook page, the night before surgery, that I was feeling scared and in need of some hand-holding, my friend Christine shared a quote from Julian Of Norwich:

Most of the time, that’s really, really true. Life is life; imperfect and occasionally painful, but usually, the thing we fear is not nearly as scary when it’s actually happening.

And though it won’t be easy in the face of doctors and scalpels, next time I’m facing a medical procedure I’ll try very hard to remember that.