Every now and then I get an itch to try to make something that sounds exotic and difficult, only to learn that it’s not nearly as tricky to make as I’d thought. I’ve decided to turn those discoveries into a semi-regular series here at The Happiest Home called “Easier than it looks.” Because it’s satisfying to do things yourself, and I admit it, sometimes it’s fun to impress people with something that seems fancy but was really oh-so-easy. And trust me – if I can make it, so can you. -Meagan

On the Fourth of July I decided to make lemon-cheese tarts, only to learn that the recipe I wanted to use called for lemon curd. I knew I could buy it already made, but had no desire to head back out to the supermarket on a holiday when I had guests arriving in a couple of hours.

So I Googled around to see how difficult it was to make, and found – to my great excitement – that not only is lemon curd simple to make, but it also requires very few ingredients: eggs, sugar, butter, and lemon. That’s it! And I already had those on hand. 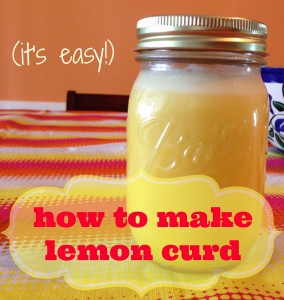 After looking at a few recipes I settled on Alton Brown’s version, because I trust his recipes, and his process of tempering the eggs seemed straightforward and easy.

But because I almost always find recipes difficult to follow the first few times, I re-wrote this one to be a little easier for a novice curd-maker.

To make the lemon curd: 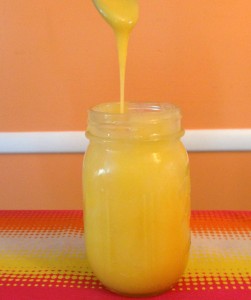 This stuff is seriously delicious. It lasts about two weeks in the fridge, so you’ll have plenty of time to use up any leftovers on scones, in lemon bars, on muffins, pancakes, rolled up in crepes…

I’m all about keeping things simple in the kitchen, and often, using an already-prepared ingredient or element makes it much more possible to pull a meal together on time and without turning into Grouchy Cooking Mom (I think you know who I’m talking about here….)

On the other hand, sometimes I enjoy the challenge of learning to make something myself rather than reaching for a box or jar. And it might just be me, but I think that fresh lemon curd tasted better than anything I could have bought at the store. Besides,isn’t it nice sometimes to know that you can make something amazing from a few basic ingredients you already have on hand?

The graham-cracker shells for my tarts, on the other hand?

Hey, I reserve the right to be inconsistent sometimes!

Are you ever pleasantly surprised when making or doing something that sounds a lot more difficult than it turns out to be?