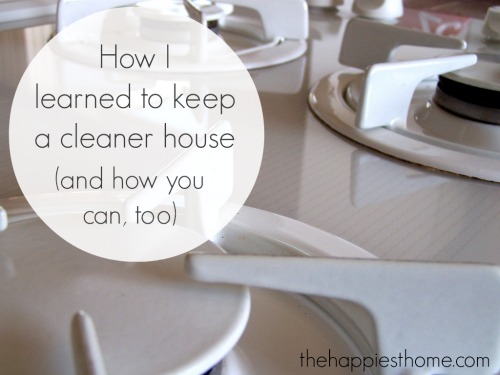 A few months ago, my sister-in-law Jenna and I were hanging out in my living room, when she remarked, “You know, you sure are a lot cleaner than you were in college.”

I might have been insulted by that remark except that Jenna was also my college roommate and every bit my partner in slovenliness. A massive laundry pile dominated our dorm-room floor the entire year. Mugs with dried cocoa and bowls cemented with oatmeal rolled under the bed and desk and were never seen again (until we moved out, that is.) There were probably bugs, but they were buried under so many layers of crap we never saw them.

If there was a song title that best described our living conditions that year, it would be Lynyrd Skynyrd’s “That Smell.” Our dorm wasn’t just messy, it was downright gross.

I’d like to say that I grew out of my sloppy habits as soon as I moved into my first “adult” home, or even after I had children, but that wouldn’t exactly be true. It took me several years to get a handle on the mess a family of small kids could create in a small apartment.

The first time I maintained a truly clean-enough (by my standards, anyway) home? The year or so when Jon and I were separated and divorced. Living alone (well, without another adult, anyway) taught me a lot about keeping up with a house by myself, and forced me to figure it out and take responsibility for the state of my surroundings.

And even though my home still gets messy from time to time (right now, the bedrooms could really use some help…) I no longer feel the sinking sense of panic I used to feel, like I would never get on top of it again. Because now I know that I can, and I will.

Here’s what I’ve learned about how to keep a cleaner house:

I figure I have two basic choices: drag my feet and resist every this-is-what-it-means-to-be-a-grownup task that comes my way, like doing the dishes or changing another diaper or getting dinner on the table…or, I can accept that the sooner I roll up my sleeves and get it done, the less fuss I make, the easier the job is in the end and the quicker I can get back to what I really want to be doing.

At some point I decided to stop hating the fact that I had to clean (and then re-clean and re-clean). It’s a fact of life. Doing it makes my surroundings nicer. I’m not exactly dancing around with a dust mop over here, but I don’t waste energy grumping about cleaning up anymore – which means I also don’t allow things to pile up and make me more overwhelmed in the end.

Embrace the endlessness. You’ll never be truly “done” cleaning, so try to find a way to accept it. 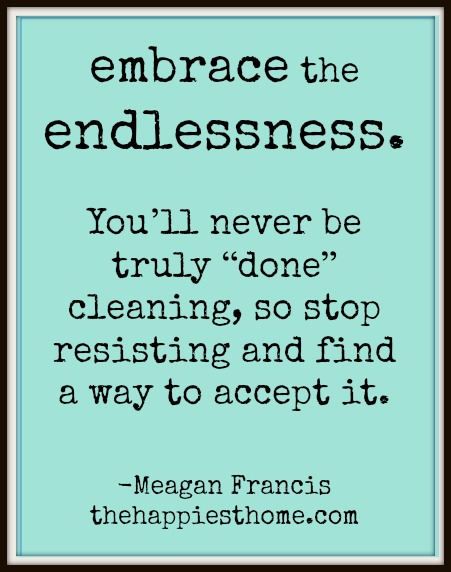 2. Don’t wait around for someone else to make your home the way you want it.

I’m a big fan of delegation. I also believe that male spouses should take responsibility for helping to keep a household running. But I learned that waiting around for somebody else to do the dishes, vacuum the rug, or make the bed is a sure-fire way to grow angry and resentful while also having to live in an increasingly messy house.

Instead, I’ve embraced the realization that having my house function in a certain way is much more important to me than it is to Jon, just as updating software on all the family’s devices, while also a valid and worthwhile task, is more important than Jon than it is to me. And if something is really important to you, you need to take the responsibility for making it happen. (This is why Jon updates the software on all the family’s devices.)

That doesn’t mean I do every single cleaning-the-house-related task. I just accept that either I manage the delegation and oversight of said tasks…or, I accept that they won’t be done as often or as well as I’d like. And I choose #1 because living in a neat and functional house is important to my wellbeing.

I should mention that, in my house, part of delegating means hiring part-time cleaning help. I first hired a service when I had three young children, was pregnant with Owen and freelancing from home full time, while Jon was working in another state. We definitely didn’t have a lot of money, but I was desperate, so we canceled the cable and made it happen.

I don’t “need” help in the same way as I did then, but I really like not having to do the floors, deep cleaning the bathrooms, and dusting (I never seem to notice dust until it’s taken over.) I definitely still have to do a lot of cleaning, but it’s nice to know I can mostly focus on tidying, laundry, the kitchen, and bathroom touch-ups.

Sometimes just taking a few tasks off your plate can make the rest of it seem much more manageable. If you can’t delegate or hire help, you might choose some things that just aren’t as important to you and put them on the “don’t do now” list. If you know you don’t particularly care about dusting light fixtures, you can focus on the things that really make a difference and are more manageable for you now.

I shared once here that there is no secret to keeping a clean house. It’s more a matter of accepting the job and taking action. And once I did that, I realized that my former #1 obstacle to keeping things under control was inertia. I’d avoid, avoid, avoid until I faced down an epic mess that would take me an entire week to clean up. Then I’d avoid, avoid, avoid again until the next time I got desperate.

Now I just keep moving. If I’m walking from the living room to the kitchen, why not make a few trips and return all the empty cups while I’m at it? If I’m bending down to pick up a toy in my path, I might as well repeat the action and pick up those abandoned socks, too.

I like to veg out on the sofa as much as anyone, but I find that once I’m down, I tend to stay down. So before I settle in, I try to make a few laps around the house to tidy up, load the dishwasher, or throw in a load of laundry. Then I can really enjoy my break…and the much neater house around me.

You know what’s funny? Looking at my list above it’s clear that what transformed me from a total slob into a decent housekeeper has nothing to do with complicated organizing systems, speed-cleaning tips, or buying new products. It’s all about attitude.

Which means anyone can be a decent housekeeper, right?

Tags:advice cleaning help housekeeping how to keep my house clean