Four or five years ago, when we had recently moved to our little city and I was spending hours weekly poring over real-estate listings, I fell in love with a white Colonial house for sale, just a few blocks from my kids’ elementary school.

Full of charm and brimming with built-ins, it was just the right size for our large family full of small children. I’m a sucker for early-20th century homes to begin with, and this one ticked off all the boxes: the location, the style, the layout – everything about it felt right, and I had an uncanny and strong sense that the house was meant to be part of my life.

Alas, we were not in a position to buy the house right at that moment, and it sold quickly. And over the years I’d give a little sigh when I passed it, wondering if the new owners appreciated it, and whether I’d ever know the people who lived there.

About a year ago, my brother John and his wife Jenna started the process of putting their “starter home” on the market so they could find a bigger place to fit their family. With three young but fast-growing kids they were bursting at the seams in a tiny two-bedroom house, but as it happens sometimes, the process moved more slowly than they would have liked, and they (especially Jenna) struggled to be patient as house after house they were interested in sold right in front of their eyes.

Jenna initially had her heart set on a mid-century modern home, but had a hard time finding one of the right size, in the right location, at the right price. Finally their realtor showed them a house that was nothing like what they thought they were looking for: not a sprawling 60s ranch, but a white 1936 Colonial. Yes, the house I’d had my eye on years ago had gone back on the market (now with a new kitchen,) and as it turned out, Jenna and John loved it. They put in an offer right away and the great real-estate machine ground into action. Wednesday, they closed. Now, the sweet white house with all those built-ins is their family’s home. 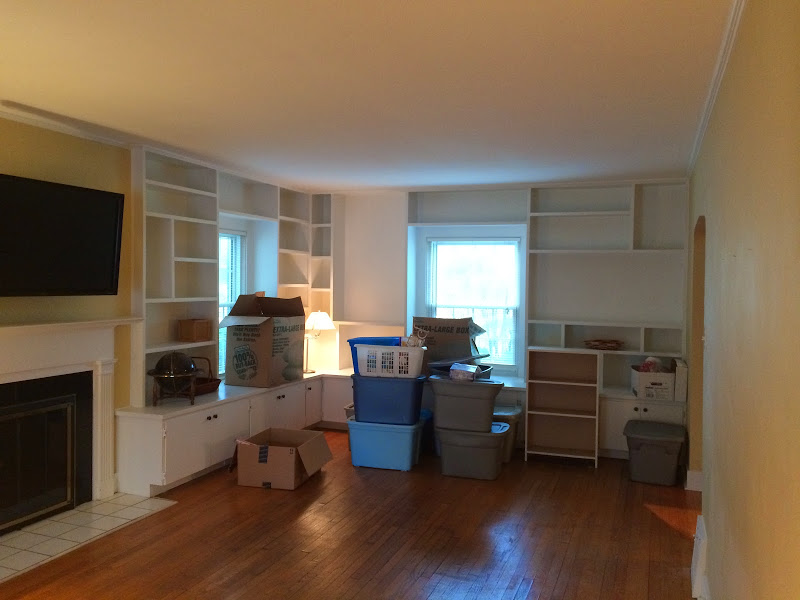 These are only SOME of the built-ins!

As I helped Jenna unpack her kitchen on Thursday, I marveled at how perfect the house is for their particular family. It’s the right size for five people, and needs just enough sprucing up to keep Jenna, a teacher, busy with summer projects, without overwhelming them with renovations. On the other hand, it totally wouldn’t have worked long-term for our family. It is hard to imagine my four hulking boys and one fast-growing daughter splitting up the two kids’ bedrooms. And our 23-year-old nephew Mario is living with us while he goes to school nearby, something that wouldn’t be possible in that house. As it turns out, the five-bedroom home we wound up in is really the perfect size and layout for us. Bonus: it’s less than a mile from John and Jenna’s new place.

This isn’t the first time I’ve felt a strong connection to a house or place or person that has later become part of my life in an unexpected way. So I do believe those strong senses, almost like a feeling of destiny or fate, that we get about a particular house or person or place or thing, drawing us to them and making us feel connected to them, are real…it’s just that sometimes the connection is a different sort than we originally thought.

The house wasn’t meant to be mine, but as it turns out, maybe it was meant to have a place in my life and my family’s lives. And as we spend many, many hours each year with Jenna and John and my nieces and nephew, Luna, Ruby and Jack, in a way it will be like a second home to us, too.

Sometimes we think we want a certain thing, but it turns out it’s really the right thing for another person. Sometimes the thing that seemed right for another person is actually right for us. Always, I believe, if we keep our minds and hearts open we can sense those connections when they are in front of us, and recognize when things work out just exactly as they are supposed to.

Because I also believe that, if we stay open to possibilities, things usually do.

Every Sunday morning I share a moment from the recent past and something it illustrated about motherhood, family life, or simply being human. You can catch up on more Sunday Morning Tea posts right here.