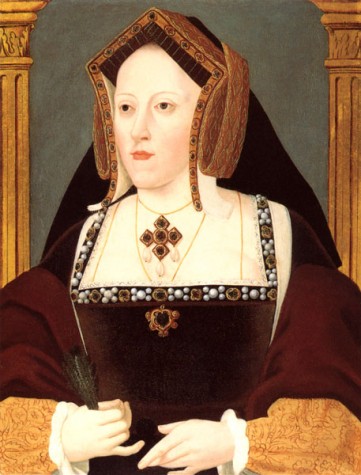 In addition to being a history buff, I am also a big fan of historical fiction. The period that fascinates me the most is Tudor England, and especially the reigns of King Henry VIII and his daughter, Elizabeth I. Like many of us, I devoured Philippa Gregory’s juicy The Other Boleyn Girl. More recently, I was captivated by Wolf Hall and Bring Up the Bodies, Hilary Mantel’s masterful, Booker Prize-winning fictional biographies of Thomas Cromwell, Henry VIII’s chief advisor.

In all of my reading about this era – fiction and non – my thoughts always turn to Catherine of Aragon, Henry’s first wife and the woman who became a pawn in his insatiable quest to provide England with a male heir by any means necessary. Catherine was Spanish royalty; a dutiful, loving wife; and the mother of his first legitimate child. Nevertheless, once she proved unable to bear him a son, her crown did not rest easily on her head.

Catherine was born near Madrid, Spain in 1485, the youngest surviving child of King Ferdinand II of Aragon and Queen Isabella I of Castile – the very same Ferdinand and Isabella who financed Christopher Columbus’s journeys to the New World. At the ripe old age of three, Catherine was betrothed to Prince Arthur, heir to the English throne. The match was quite a coup for the English: not all of Europe accepted the Tudor dynasty since it had passed through illegitimate heirs, but Catherine’s lineage was among the most prestigious in Europe. An alliance between the families strengthened the Tudors’ tenuous claims on the English throne and gave both England and Spain a bulwark against the powerful French.

Catherine and Arthur began corresponding in Latin at age 13, not meeting in person until ten days before their wedding. On November 14, 1501, the two 15-year-olds wed. Their “honeymoon” was short-lived, however: after their wedding, Arthur was immediately dispatched on royal business. Not long after, both of them became very ill. Arthur did not survive and Catherine found herself a widow at age 16. After Arthur’s death, Catherine became a stranger in a strange land. Arthur’s father, King Henry VII, did not want to repay Catherine’s dowry to her father so the two kings arranged for Catherine to marry Arthur’s younger brother, Henry, a decision that kept Catherine in England and away from her family for the rest of her life.

Catherine’s marriage to Henry was long postponed because Henry was only 11 at the time of their betrothal. King Henry VII also had to secure a dispensation from the Pope to allow Catherine to marry her dead husband’s brother, one which they received because Catherine swore that her marriage to Arthur had not been consummated. While awaiting her second wedding, Catherine supported a small household of ladies-in-waiting and at one point even served as the Spanish ambassador to England, making her the first female ambassador in European history.

Dispensation in hand, Catherine and Henry VIII married not long after he ascended to the throne of England in 1509 after his father’s death. The new king and queen were coronated together in a lavish ceremony, but Catherine’s happy days did not last long. Catherine conceived soon after her coronation, but gave birth prematurely to a stillborn daughter. Over the next several years, Catherine gave birth to five more children – three sons and two daughters – only one of whom, Princess Mary, lived longer than 52 days.

While dealing with the shattering loss of her children, Catherine nevertheless served England as a skillful stateswoman. While Henry was in France on a military campaign, she served as Regent of England during a war with Scotland, even riding out in full armor while pregnant to address the troops. Catherine also became both more devout and more interested in scholarship as she aged. She initiated various relief programs for the poor and sought learning not only for herself, but for her daughter and the other women in the court. About her, Henry’s minister Thomas Cromwell commented, “If not for her sex, she could have defied all the heroes of History.”

Henry, meanwhile, was becoming ever more fixated on having the male heir he believed he needed to secure the Tudor dynasty. While married to Catherine, he carried on affairs with several women. (At least one of these resulted in a child, Henry’s illegitimate son, Henry Fitzroy, who was born in 1519.) While still very much married to Catherine, Henry fell in love with Anne Boleyn, one of Catherine’s ladies-in-waiting. His desire for Anne mixed with his desire for a male heir and he soon became obsessed with the idea of having his marriage to Catherine annulled. He claimed that their marriage and her pregnancies were cursed because, according to his questionable interpretation of the Bible, any man who marries his brother’s wife will remain childless. Henry pled his case to the Pope, requesting that his marriage be annulled so that he could marry Anne. To make a very long story very short, the Pope refused and Henry ended up with two divorces: one from Catherine and the other from the Roman Catholic Church.

Even before their divorce, Catherine was banished from court. Afterward, she was confined to Kimbolton Castle where she remained in a single room except to attend Mass. She received occasional official visitors, but was banned by Henry from seeing their daughter Mary. The king offered Catherine and Mary the chance to see each other if they would acknowledge Anne, his new wife, as Queen of England. Swearing to the end of her life that she was the one rightful queen, Catherine refused. She died in 1536 after a long illness, not having seen her only daughter in years.

After Anne was also unable to bear him a son, Henry had her executed and remarried her lady-in-waiting, Jane Seymour. Jane gave birth to Henry VIII’s only legitimate male heir, his son Edward who, though technically king from 1547-1553, died before reaching the age of majority. The succession passed to Catherine’s daughter, Mary, who became the first Tudor queen. For as much as he desired a son, it was Henry’s daughter, Elizabeth I, who was perhaps the most successful Tudor monarch: she ruled England for 44 years, bringing stability and a sense of national identity to her kingdom. Henry’s accomplishments, meanwhile, will always be overshadowed by his ill treatment of his six wives – Catherine of Aragon not least of all – and his obsession with securing his legacy through a male heir.