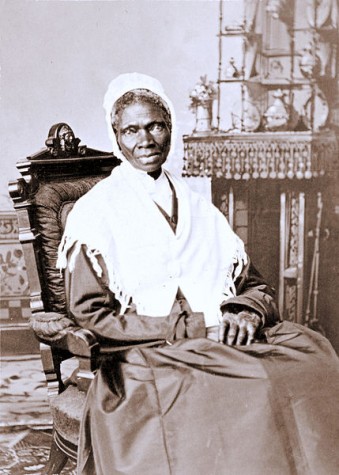 One of my New Year’s resolutions is to show more gratitude for the life that I have – even on the days when piggyback ear infections, grocery store meltdowns, and broken washing machines threaten to derail me. In the wake of Sandy Hook, I have tried to be more mindful of the blessings of my life and the ways in which even my bad days are lucky ones. Learning more about the life of Sojourner Truth, African American abolitionist and women’s rights activist, and the ways in which she had to fight for her own freedom and that of her children is another reminder of how good I have it.

Sojourner Truth was born Isabella Baumfree in or around 1797. One of ten or twelve children, she was born into slavery in New York. After her master died when she about nine, she was sold away from her family – along with a flock of sheep. By 1810, she had been sold twice more, eventually coming under the ownership of John Dumont. Although Dumont was not generally a cruel master, his wife found many ways to harass her and make her life more difficult.

Around 1815, Truth met and fell in love with Robert, a slave from a nearby farm. Robert’s master forbade the relationship: he didn’t want Robert fathering the children of a slave he didn’t own because then he wouldn’t be able to claim the children as his own property. Despite Robert’s owner’s wishes, Truth and Robert did have two children: Diana and Thomas (who died shortly after his birth). In about 1817, Robert’s master’s cruelty reached new depths: he and his son set upon Robert while he was going to visit Truth and gave him a beating so bad that he eventually died from his injuries. Soon thereafter, Dumont forced Truth to marry one of his own slaves. The couple had three children, Peter, Elizabeth, and Sophia.

During these years, the state of New York was moving closer and closer to abolishing slavery. John Dumont promised Truth that he would reward her years of devoted service by granting her freedom a year before the state’s official emancipation date of July 4, 1827. He later went back on his word and so Truth escaped one morning before dawn with her infant daughter Sophia. According to Truth, “I did not run off, for I thought that wicked, but I walked off, believing that to be all right.” After wandering and praying for direction, she was taken in by a progressive couple, Isaac and Maria Van Wagener, who insisted that Truth call them by their given names rather than the more standard “master” and “mistress.” Dumont soon caught up with Truth and threatened to take Sophia if Truth did not return with him to his farm. The Van Wageners then offered to compensate Dumont for Truth’s services until the state-wide emancipation became official.

Truth soon learned that Dumont had illegally sold her five-year-old son Peter to a slave owner in Alabama where emancipation showed no signs of coming soon. Horrified and declaring, “I’ll have my child again,” Truth petitioned Dumont and Peter’s new owner to get her son back – all to no avail. Eventually, she was referred to a group of Quakers who took on her case and helped her file an official grievance in court. In order to free Peter, Truth first had to prove that she was indeed his mother. After months of proceedings, Truth got her son back – and, in doing so, became one of the first black women in American history to win a case against a white man and proving that, in this instance, a mother’s claim was more important than a master’s.

While with the Van Wageners, Truth had a sort of religious awakening and became a devout Christian. After years of supporting herself and her children with odd jobs and work as a housekeeper, she eventually felt called to preach. She became a Methodist, changed her name to “Sojourner Truth,” and took to the road, traveling and speaking out for abolition, pacifism, religious tolerance, and women’s rights. While preaching and living in communities of like-minded activists, she became a well-known speaker and interacted with such notable figures as Frederick Douglass, William Lloyd Garrison, and Harriet Beecher Stowe. Truth delivered her best known speech, “Ain’t I a Woman?” in 1851 at a women’s rights convention in Ohio. In it she questioned the dominance of white men over women of all races:

I have borne thirteen children, and seen most all sold off to slavery [as far as the historical record shows, Truth only had five children], and when I cried out with my mother’s grief, none but Jesus heard me! And ain’t I a woman?

Then they talk about this thing in the head; what’s this they call it? [member of audience whispers, “intellect”] That’s it, honey. What’s that got to do with women’s rights or negroes’ rights? If my cup won’t hold but a pint, and yours holds a quart, wouldn’t you be mean not to let me have my little half measure full?

If the first woman God ever made was strong enough to turn the world upside down all alone, these women together ought to be able to turn it back, and get it right side up again! And now they is asking to do it, the men better let them.

Eventually, Truth recruited African American soldiers for the Union Army in the Civil War – her grandson James enlisted in the Massachusetts 54th, the regiment immortalized in the film Glory – and, afterward, worked to obtain government land grants for former slaves. Late in life, Truth traveled the country with her grandson Sammy, speaking out in favor of temperance and against capital punishment. Well into her 80s, she spent a year living among and trying to gain support for the “Exodusters,” freed slaves who resettled in the west. She died in 1883 with her daughters Diana and Elizabeth at her side.

In a new year when I am trying to remember to count my blessings, I give thanks for women like Sojourner Truth whose strength and devotion to their children under the most difficult circumstances remind me of the tough stuff of which mothers are made.

Editor’s Note: Are you enjoying Kristen’s posts? Be sure to check out the series of profiles on mother-writers she recently launched on her own blog!