This post is by Kristen Levithan, Happiest Mom contributor and blogger at Motherese. If you missed it, you can read the first post in our Historical Motherhood series here. 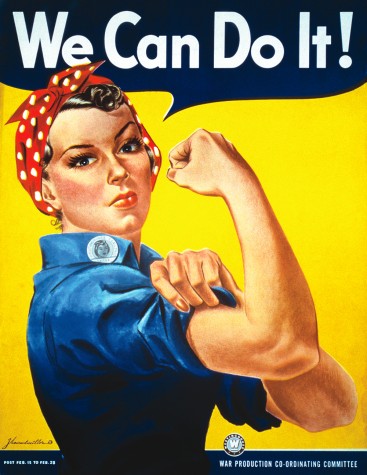 It’s an image that many of us know well: a young woman, her hair tied back with a red and white bandanna with just a hint of feminine curl sneaking out, her powerful forearm and steely gaze competing for your attention. You may have seen her on a poster in a college dorm room or on the mug of the woman who shares your cubicle.

She’s Rosie the Riveter, symbol of the millions of American women – many of them mothers – who went to work in the factories during World War II, and now a cultural icon associated with women’s rights and economic empowerment.

As millions of men went off to war, many American women filled new roles and embraced new opportunities. Right before the soldiers departed, the marriage rate skyrocketed and many women found themselves playing the roles of both mother and father, raising their children with a partner thousands of miles away or, much worse, killed in battle. A woman who went to work stateside as a nurse’s aide recalls seeing “the misery of the war” on the home front after the initial excitement wore off:

“Pregnant women who could barely balance in a rocking train, going to see their husbands for the last time before the guys were sent overseas. Women coming back from seeing their husbands, traveling with small children. Trying to feed their kids, diaper their kids. I felt sorriest for them.”

Traditionally managers of the home, these mothers had to find new ways to make ends meet. As food and domestic supplies were rationed and government advertising campaigns encouraged frugality and sacrifice, women made accommodations, cutting back on their families’ diets, limiting their use of needed supplies, and growing their own food in “victory gardens.” To make ends meet, many mothers also made compromises in their housing, often moving in with extended family or other women or taking in boarders.

In addition to making changes at home, many women went to work outside the home for the first time, replacing men in the domestic workforce and answering the call for workers in the factories dedicated to military production. Rosie the Riveter, a composite character based on the experiences of several real women, became a symbol of pride and motivation for the millions of women who joined the war effort due to their patriotism, the need for money, an interest in work, or some combination of the three. Calling upon extended family and other war wives to help care for their children, these mothers proudly donned the gender-less factory uniform and headed to work. One “Rosie” recalls working alongside her mother: “First time my mother ever worked at anything except in the fields – first real job Mamma ever had. It was a big break in everybody’s life.”

The image of Rosie – strong, proud, independent – inspired women not only to join the war effort, but to prove that they could do a “man’s” job and do it well. Indeed, a few months after the U.S. entered the war, a survey showed that employers believed women capable of doing 85% of available jobs, up from 29% just months earlier. The type of work women did varied greatly, but much of it was physically demanding and some of it was even dangerous. Another “Rosie” recalled turning orange from a chemical used in the munitions factory where she worked: “None of us ever asked, ‘What is this? Is this harmful?’ We simply didn’t think about it. That was just one of the conditions of the job.” 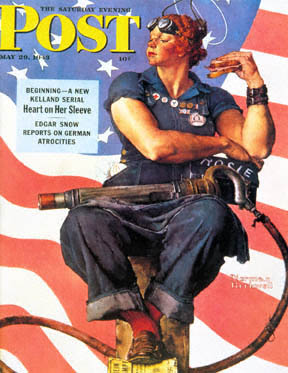 The original Rosie the Riveter, as depicted by Norman Rockwell on the cover of the “Saturday Evening Post” on Memorial Day, 1943

There is some debate about the legacy of women heading to work en masse during the war. On the one hand, many jobs taken on by women during the war were phased out after the war ended or given to war veterans upon their return. Male workers were also favored during the war: the average woman working in a wartime factory only earned 60% of what her male coworkers did.

On the other hand, going to work gave many mothers a taste of a life they had never imagined before, one in which they had the option to work outside of the home, enjoying the independence and extra money that came with it. This was also the case for women of color, who, in many cases, worked alongside white men and women for the first time. Inez Sauer, a “Rosie” in a Boeing factory, reported:

My mother warned me when I took the job that I would never be the same. She said, “You will never want to go back to being a housewife.” At that time I didn’t think it would change a thing. But she was right, it definitely did…at Boeing I found a freedom and an independence that I had never known. After the war I could never go back to playing bridge again, being a club woman…when I knew there were things you could use your mind for. The war changed my life completely. I guess you could say, at thirty-one, I finally grew up.

Some also see the mass employment of women during the war to be a forerunner to the women’s movement. Indeed, the now ubiquitous image of Rosie with the “We Can Do It!” slogan was adopted by the women’s movement in the early 1980s as a rallying cry.

Whether you view the work of our wartime foremothers as a springboard for feminism or a missed opportunity for earlier equality, I hope that the next time you see the image of Rosie the Riveter – on that poster or coffee mug – you will stop and think about the millions of women who labored so tirelessly in support of their country and the war effort. As the dedication on the memorial in Rosie the Riveter WWII Home Front National Historical Park in Richmond, California reminds us, “You must tell your children, putting modesty aside, that without us, without women, there would have been no spring in 1945.”