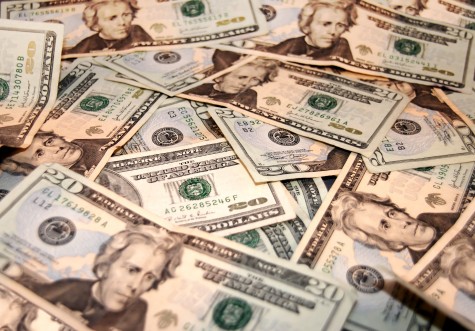 This is the second in a series of three posts inspired by this month’s sponsor, Kidworth.

Last weekend we celebrated Christmas with my husband’s family. In addition to unwrapping Lego sets and play food and pajamas, each of the kids got a card stuffed with cash from Grandma.

“I’m filthy, stinkin’ WICH!” said my six-year-old Owen, who is perhaps overly fond of his cash reserves. He carefully folded his money and handed it over to my husband for safekeeping until it could be safely stashed in his “treasure” box at home.

Right now, Isaac’s and Owen’s twenties and fives are smoothed and stacked neatly with the rest of their savings in their cubbies on top of their dressers. If you asked one of them, they’d be able to give you an accurate report of their assets at any time.

William and Jacob, on the other hand?

Totally different story. William put all his money in a wallet, but then lost the wallet (and all the money therein.) Jacob probably managed to spend his before we even left his grandmother’s house. I found a wadded-up twenty when I did the wash. Nobody could tell me with certainty whose it was (though Owen eyeballed it with a gleam in his eye.)

It’s funny to think that four kids raised by the same two parents could have such different attitudes about money, right from the start. And looking at my two sets of kids and their very different financial habits, you might assume Will and Jacob are “bad” with money while Isaac and Owen are “good”. But there’s such a thing as being too cautious, right? Owen is the kid who, when playing Monopoly, will pass up all the best properties because he doesn’t want to part with his hard-earned gold, yellow, and blue money. Isaac stresses over buying things, even things he really wants that he’s been saving for…because he doesn’t want to part with his cash.

I guess it just shows that whether they’re naturally inclined to be mini-misers or spendthrifts, all kids need guidance to help them learn to share, spend, and save appropriately. I don’t want my kids to blow all their cash, but I don’t want them to worship it, either. I don’t want them to be afraid to enjoy the money in their grasp, or to forget the responsibility that comes with having it. And mostly I know I need to help them learn how to manage it in a way that works for their individual personalities instead of some one-size-fits-all approach. (Kinda like parenting in general, right?)

The question is, how do I teach them?

When I was a little kid, my mom took me into the bank to deposit my pennies and quarters and checks from Grandma. We’d stand in line, my little vinyl-covered bank book clutched in my hand. After making my deposit, the teller would hand me my prize: a little fuzzy cotton-ball guy with googly eyes and sticky feet, the bank’s mascot for kids. Evidently it made an impression, as I still remember that fuzzball guy all these years later.

I’m nostalgic for those days, but have to admit that things have changed. I rarely set foot in a bank anymore. Now that I can do almost everything through the ATM, I don’t even interact with tellers very often. More and more of my transactions are electronic. As the world changes, so will the tools available to my kids to help manage their money. Staying on top of those tools and figuring out how to help them manage a world of electronic funds is just smart.

And it’s not like those trips to the bank set me firmly on the path to financial wisdom. It has taken me most of my life to learn how to manage money, and I’m still trying to get it under control. The right approach is so individual. For some people, a steadily-growing stash of cash might provide the inspiration to keep saving. For others, it’s just added temptation to have it sitting there, waiting to be spent. I know that for myself, as much as I love having some physical cash reserves, being able to put my money “safely” away and then access my account details online – which these days I do very frequently – helps me stay on top of transactions and gives me a better view of the ‘big picture’, which is important to me as a big-picture thinker.

Even whether to give allowances (which are sort of equivalent to a salary) or paying for individual jobs (more akin to commissions) might depend on the kid. Are they more motivated by the security of a specific amount of money, or the calculated risk-taking of performance-based pay?

Every holiday my kids end up with a little pile of money from generous relatives and this year, I’m determined to help each of them come up with an individualized system that helps them figure out how to save, share, and spend in a way that works for them. After all, the toys they receive will be forgotten soon enough, and the candy from their stockings will be gone within the week. But learning to use their money wisely – and in a way that they can sustain – is the kind of gift that could last their whole lives.

Are your kids spendthrifts, misers, or somewhere in between? What tools are you using to teach them about money?

I was compensated for this post as part of a series sponsored by Kidworth. All opinions are my own.