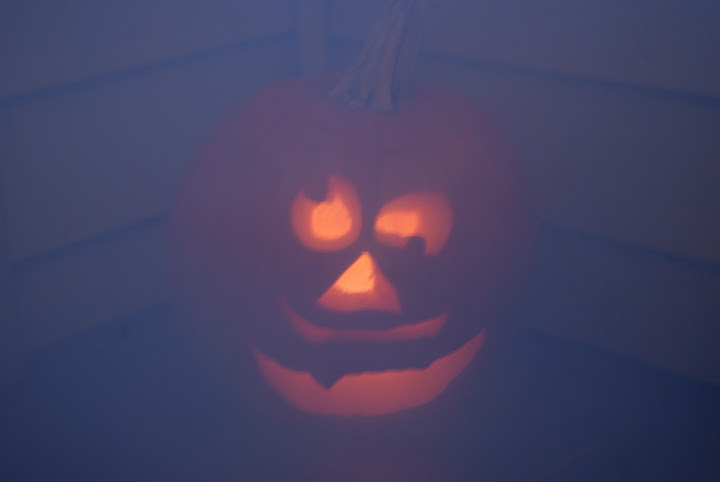 Our Jack-o-Lantern: A family effort. (That extra mouth is actually a mustache.)

If you celebrate, I hope you had a wonderful day.

If you don’t, I hope the neighborhood kids didn’t repeatedly ring  your doorbell and knock hoping to coax you out with a bowl of candy.

Our party, Saturday night, went well. It took my sister Kathreen, Jon, and I (plus all the kids) the entire day to get ready–between grocery shopping, cleaning (and cleaning and more cleaning), yard work, cooking and decorating–but we pulled it off.

I’d had grand ideas about converting our top story into a haunted house, but I abandoned the idea when it occurred to me that since my four-year-old is already scared to go up there alone, perhaps it was best for us to leave the upstairs a non-spooky zone.

Downstairs, time and budget restraints forced me to stay realistic. Instead of transforming our entire first floor into a Martha Stewart Living photo shoot, we added fun, inexpensive and kid-friendly touches throughout. And since I also don’t want my timid four-year-old afraid of the kitchen or dining room, we kept decor low-key and whimsical rather than gory or grotesque: 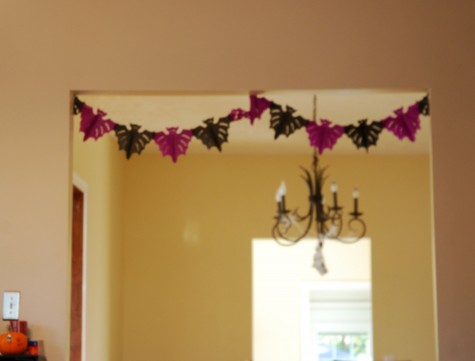 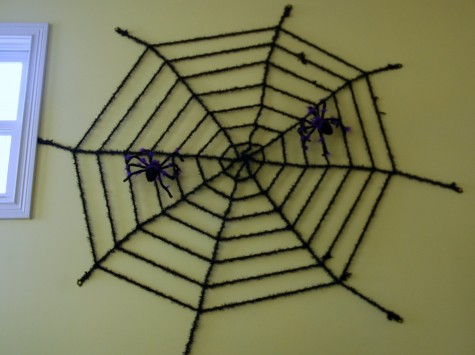 This spiderweb is HUGE! 6 feet across. It nicely covered that still-blank wall we haven’t decided how to decorate yet, and it was about $5 on sale–again from Pier 1. 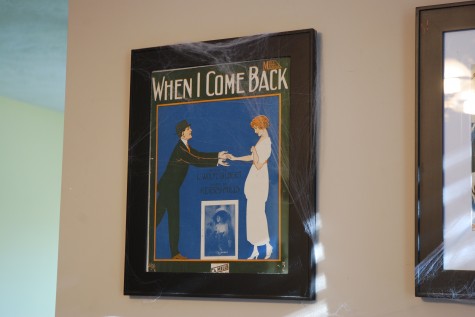 I’ve got a penchant for old sheet music, seen here framed on the media-room wall. It looked nice and spooky with a bit of cobwebbing on it. 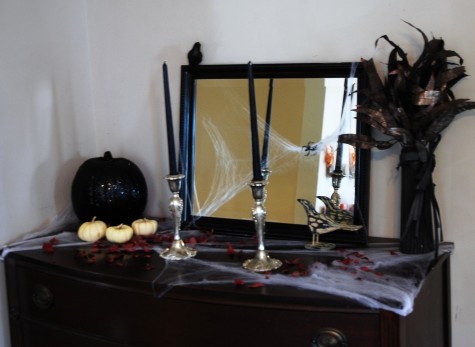 My autumn table underwent a somber (temporary) makeover with some black taper candles and a glittery black pumpkin from Michael’s, plus a cool black and bronze feather arrangement from Meijer. 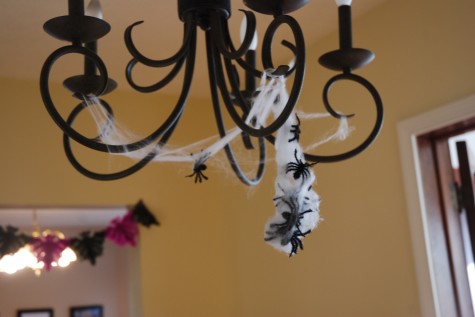 I’d been wanting to make some kind of spider’s nest after spotting an awesome faux egg sac in a catalog. With about .50 worth of polyester webbing and some fuzzy spiders from Pier 1 (less than $2), I created this little mass of critters to hang over the dining room table. As creepy as an egg sac, only in my version, the eggs have just hatched. 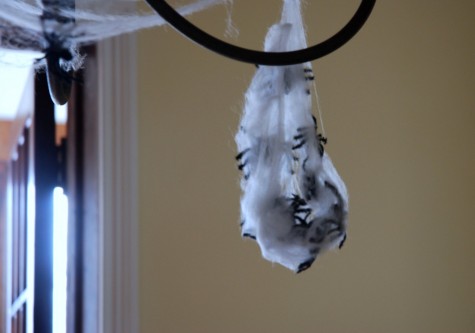 Of course, it wouldn’t have been a party without food. Everybody brought something to pass so we had plenty of creamy, cheesy, fall-party-comfort food. My sister made chili and “sausage on a plank” while my sister-in-law Jenna outdid herself with two awesome dips, spaghetti-hot-dog-octopi,  and these creepy brain cupcakes: 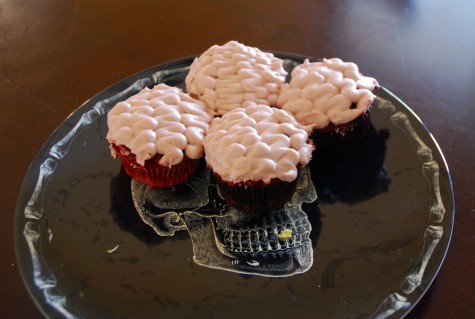 There were over 35 people here, most of them kids. But strangely, it wasn’t a bit chaotic. The mass of boys went upstairs to play, while the grownups and smaller fry hung out downstairs. We ate, drank, talked, and laughed. I got so busy chatting I completely forgot to take photos of the party itself–but I think it’s safe to say a good time was had by all.

I’d actually resolved not to bother with jack-o-lanterns this year, as none of the kids like to touch the ‘guts’ and carving usually becomes a stressful affair where I run madly from kid to kid assisting with scraping and sawing. But while making a run to the farm stand for some apples and squash today, I couldn’t help myself. Sometimes, tradition wins, as well as the promise of toasted, salty pumpkin seeds. So I picked up just ONE plump, round pumpkin for the whole family to carve together. The older boys helped cut the hole in the top, we took turns scooping out seeds (for the boys this included shuddering in disgust) and William drew on the face. Owen handled the little pumpkin he’d brought home from preschool with some help from big brother Isaac. 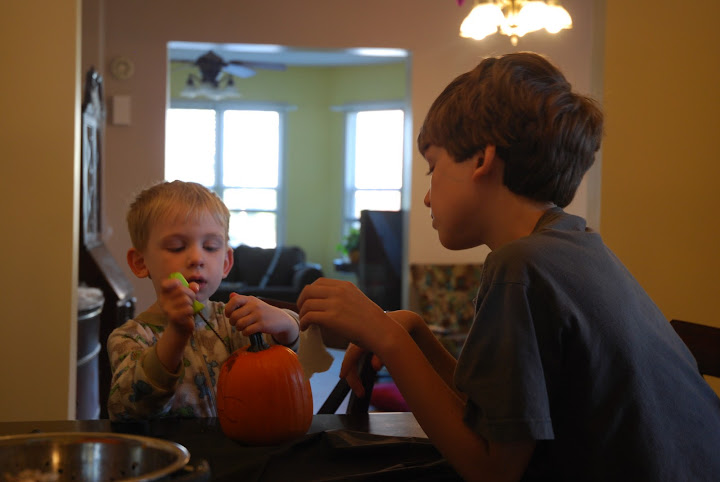 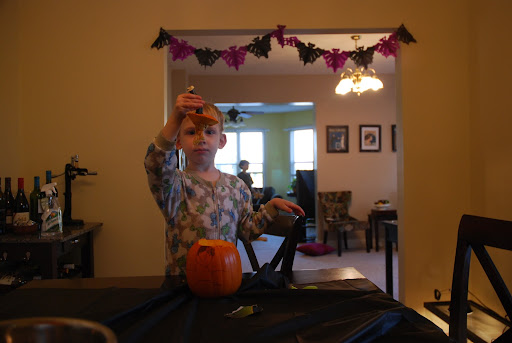 Sure, the pumpkins will only really be ‘in use’ for one night, but isn’t it the satisfaction of the process that counts? (Plus, last year we carved our jack-o-lanterns two weeks before Halloween and neighborhood squirrels ate their faces.)

By now it was time to get into costumes and hit the neighborhood for trick-or-treating. Clara, wearing our family’s traditional toddler puppy costume, was not too enthused about the whole thing… 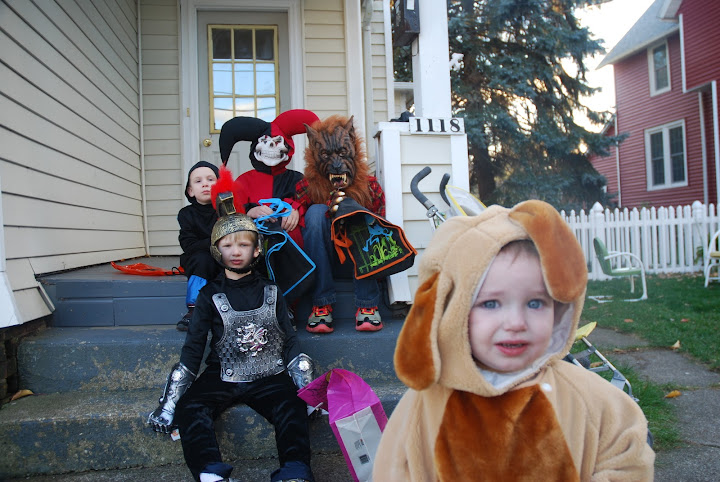 Forty-five minutes of trick-or-treating was MORE than enough.

After the traditional post-begging-sugar-gorge, it was time for the kids to come back down to planet Earth, take a bath, brush teeth (even more thoroughly than usual) and get tucked into bed. I’ve finally settled down with a small sigh, a glass of wine, and my reward. 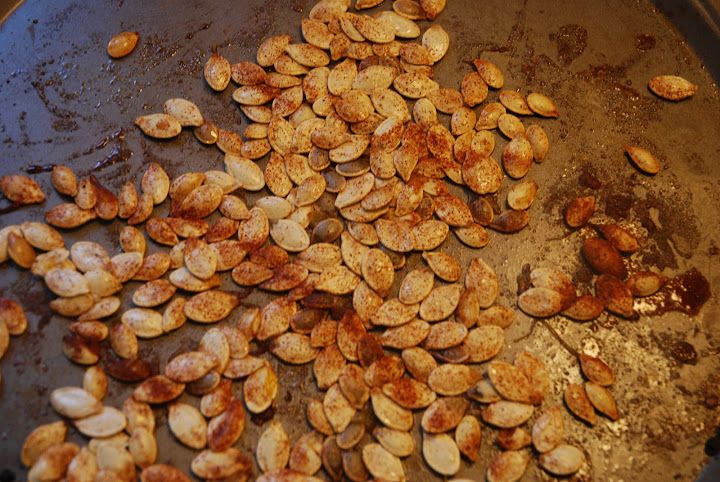 That pile of candy wrappers on the living-room floor can just wait.

How was your weekend?