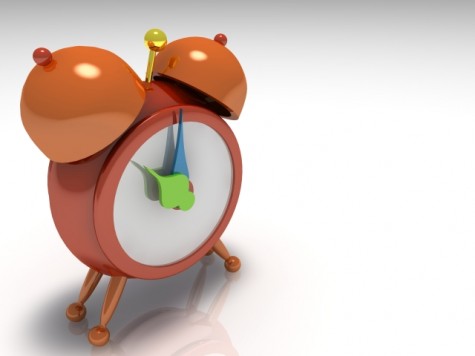 I have so enjoyed reflecting on time with all of you over the past month.We’ve had some great discussions, and all your thoughtful comments and my guest interviews with Laura Vanderkam and Gretchen Rubin have really inspired me to take the, uh, time to consider how I want to be using the limited hours I have. And it’s inspired me to make some changes to our family life.

First of all, I’m putting myself on a real work schedule.

I launched my first website (a sort of pre-blog HTML ‘webzine’ with three or four tildes in the URL, sporting rotating GIFs and comic sans font) back in 1997, and I was immediately hooked. But the Internet can be a mixed bag: it has opened up possibilities for me that would not have existed a couple of decades ago, but it’s easy to get the feeling that if you walk away for a minute or two, you’ll have missed something.

The “notice me! notice me!” nature of the internet, combined with my status as a work-at-home mom, makes finding a balance tricky. I’ve carefully set up a life that allows me to pursue a career and earn a living while also being available to my kids, but as I pile more goals on my plate, it’s easy to get to the point where I’m really not as available as I’d like to think I am.

I had my ah-ha moment last week, when I was trying to snuggle a very cranky Clara to sleep and kept glancing nervously at my laptop across the room. I didn’t have any deadlines or urgent communications to attend to…no, I just felt like I might be missing something, or like Clara’s refusal to nap might completely blow my afternoon (even though she’d been with a sitter all morning and I’d already gotten plenty of work done).

I know other entrepreneurial moms can relate to that anxious feeling, the difficulty turning “off”. The fact is that there’s always something I could be doing online. But at some point, I have to be willing to say “I’ve put in X hours today; that is enough. I’m shutting it off.”

I’ve been trying the “shut it off and walk away” approach for a few days and suddenly I’m noticing I have so much more available time than I used to feel like I did. Homework is not such a hassle; pulling together a healthy dinner (and sitting down to eat it with the kids) is within reach most nights, the evening feels less chaotic.

Whether or not your computer is your work, I’d encourage you to set aside a few hours every day where you won’t turn on the computer at all (or check your email on your Droid or iPad or whatever device you’re plugged into.) It’s possible that by being unavailable for several hours a day, you’ll miss “something”. But the other truth I’ve learned about the internet: when you miss an opportunity, or a discussion, or whatever the “something” of the moment is, there’s almost always a new “something” to replace it soon enough. And the something you missed is probably not nearly as important as it seemed.

That brings me to a change we made last week that I’m feeling really good about: we shut off the video games indefinitely. Video games are to my kids what Twitter, Facebook and email are to me. I get the appeal. I mean, what kid wouldn’t relish the idea of being in control of their own (crazy-realistic) fantasy world? Anything could happen in this magical realm, and if you stop playing, you might…well, miss something.

So I’ve tried everything to make it work, from letting the kids impose their own limits (the kids logged at least 124 hours of XBox time that week before I finally realized that to them, a reasonable limit meant stopping to pee and eat) to reserving certain special hours or days for games, or setting criteria that must be met before playing. All that did was put me in the position of being the police, judge, and meditator as kids pleaded their cases to me “Well, I didn’t actually start playing until 4:03, shouldn’t I get an extra three minutes?” or “Mom, Isaac got five minutes more than me!” or “I was only helping Owen beat the level and he asked me to so it shouldn’t count!” Homework was done hastily to get back to the game. Chores were forgotten. Kids begrudgingly came to the dinner table, irritated at having had to pause in the middle of some important battle or other.  Too often I relaxed the rules, letting the kids play themselves silly so I wouldn’t have to keep policing them, or arguing with them, or negotiating with them.

I admit, in some ways it made my life easier. It’s a snap to get dinner on the table when all of your kids (including, sometimes, the baby) are staring wide-eyed at the television screen…not so much when they’re all circling the kitchen like vultures looking for carrion. And following some drama on Twitter is a breeze when one of the boys is about to beat level 19 and everybody’s jumping around the living room in glee instead of hanging on my leg asking me to play Go Fish.

But then one of the kids brought home his “About Me” book from preschool and every single drawing had some tie-in with a video game. With a sinking heart, I realized that I’d been falling down on the job. The kids’ time needs to be guarded, too….and the pull of the game system is simply too powerful for them to overcome without some parental help. Sure, there are those mythical kids I keep hearing about who can handle limits or even play for an hour, then shut the machine off and go outside to play, but mine–at least right now–just aren’t those kids. Though the news initially brought with it some tears and protests, removing the temptation entirely has made all of us more relaxed.

And that’s the story of how video games went bye-bye in our house last week. Maybe one day we’ll be ready to try again, but for now, we just all have better things to be doing with our time.

Between losing my built-in technology babysitter and setting computer hours, you might see me around Twitter a lot less, especially during the day. And I might not respond to your email within minutes like I used to. I’ll be using my child care and nap time as wisely and productively as I can so that when those hours are over, I can slap the laptop closed…and keep it that way for the bulk of the afternoon and evening.

Of course, I’ll occasionally have to respond to an email or take a phone call while my kids are wanting my attention…that’s just part of the life of a work-at-home-mom. But I have to learn to say “enough”. I don’t want to realize one day that I spent more precious hours chatting with Twitter friends than talking with my kids. Or that they spent more hours playing in an imaginary world than the real one.

This is our time. We don’t get it back. Each day the kids change a little, imperceptibly, until one day your 12-year-old son is almost as tall as you and that your 6-year-old suddenly has a mouth full of big-people teeth, and the baby…isn’t a baby anymore. These moments seem small, maybe even inconsequential. But moments they add up to an hour, a day, a year, a lifetime. Really, they’re everything.

And it’s time to stop being so distracted by that elusive “something” that I run the risk of forgetting that.