I wrote this post a couple of years ago, and it generated some great conversation. As we approach trick-or-treating this year, I thought I’d re-publish and keep the discussion going.-Meagan 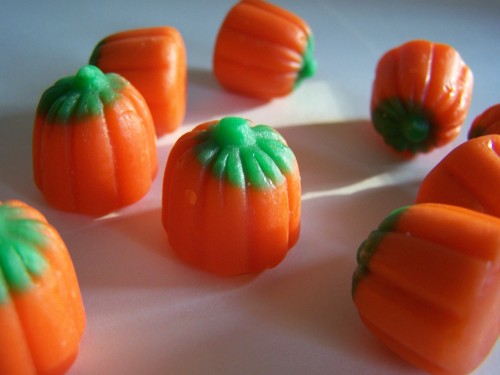 A couple of Halloweens ago, my brother-in-law Scott and my husband Jon decided to build a spectacular Pirates of the Caribbean-themed display for our yard.

Figuring the smoke, animation and dialogue might cause more trick-or-treat interest than usual in our house, we really stocked up on candy, buying ten or so bags, plus 100+ mini-finger-flashlights. We were right: come the evening of October 31, almost our entire booty was gone within the first hour.

At some point during all the commotion, a dad, accompanied by two young boys, remarked to Scott, “We’re giving all our candy away after trick-or-treating…my kids don’t eat high-fructose corn syrup.” (Interestingly, his boys each took a piece of candy, but not a finger light.)

Scott, manning a huge plastic cauldron full to the brim with HFCS-laden candy, muttered something noncommittal. The man stood watching the show another minute or two, and then, for good measure, made his point again. “I can’t believe all these kids will be eating this much high-fructose corn syrup tonight.”

I, on the other hand, can’t believe this guy actually came into our yard, watched our show, let his kids take our candy, and then made a point to criticize it. As a mom who sometimes makes non-mainstream parenting choices, I support his right to raise his kids however he wants to, and promise I wouldn’t judge any parent for shying away from Halloween candy. But when somebody feels the need to seek out a total stranger – who was at that very moment handing out HFCS candy! – and proselytize, then it goes beyond personal choice and becomes food dogma.

And I don’t think food dogma serves us well.

The ironic part about this exchange happening in my front yard is that I’m generally not a fan of high-fructose corn syrup either, nor do I necessarily consider it “food.” At the grocery store I go out of my way to avoid HFCS in our everyday staples – the foods that make up the bulk of our diets – reading and re-reading labels and often, paying premium for the HFCS-free choice.

I do this for three reasons: first, high-fructose corn syrup is everywhere, and I think it’s generally a bad idea to consume any one ingredient so excessively, particularly one that’s a synthetic, man-made chemical. Second, I don’t like the way our food chain has become excessively corn-based, so I try to “vote with my checkbook” by buying HFCS-free foods. And third, foods that are free of HFCS also tend to be less processed and sweet overall, so avoiding it is a good way to keep our diets more whole and healthy.

So as a general rule? My kids also “don’t eat high-fructose corn syrup.” But I also make exceptions for holidays, meals out, foods we only eat in very small quantities (like the occasional convenience food) and any food offered to us by a host. In short, while avoiding HFCS is one way I try to make healthier food choices for my family, our entire diet is not governed by avoiding it…or any other ingredient. I don’t think that makes us inconsistent, just realistic. Have you priced out organic Halloween candy lately?

I can understand why another parent might feel strongly enough not to let their kids have HFCS even on Halloween…just like some moms make sugar-free carrot cakes for first birthday parties, whereas I have always made the chocolatiest of chocolate-frosted cakes, and then watched my babies attack them with delight.

On the other hand, I’ve also been the meanie parent who refuses to send “fruit snacks” with my son when it’s his turn to be snack leader. We’ve all got our own standards and lines we won’t cross.

Because I believe eating should be fun. And I believe the more fun and pleasurable we make it – the more “happy” the meal – the better, healthier choices we’ll be able to – that we’ll WANT to – make, and sustain…not just until we drop a pants size or a new fad comes along, but for the rest of our lives.

A few years ago I read The Omnivore’s Dilemma by Michael Pollan. I was already pretty much on board with Pollan’s message: “Eat food. Not too much. Mostly plants,”  but to me, one of his most compelling arguments is that it’s not what we eat, but how we eat it that’s our biggest problem. Some of my favorite excerpts from a 2004 NYT article reprinted on Pollan’s site:

“Carbophobia, the most recent in the centurylong series of food fads to wash over the American table, seems to have finally crested, though not before sweeping away entire bakeries and pasta companies in its path, panicking potato breeders into redesigning the spud, crumbling whole doughnut empires and, at least to my way of thinking, ruining an untold number of meals.”

“…you might be interested to know that there are other cultures that have been eating more or less the same way for generations, and there are peoples who still rely on archaic criteria like, oh, taste and tradition to guide them in their eating decisions. You might also be interested to know that some of the cultures that set their culinary course by the lights of pleasure and habit rather than nutritional science are actually healthier than we are—that is, suffer a lower incidence of diet-related health troubles.”

“No wonder we have become, in the midst of our astounding abundance, the world’s most anxious eaters.”

“Anxious eaters” is exactly right, and it’s rampant in the parenting world. Feeding ourselves and our kids pure, whole diets – and eschewing everything that’s not pure and whole, all the time – has become another way to reassure ourselves that we’re doing this motherhood thing right, another way to try to guarantee a good outcome (something I’ve definitely fallen prey to myself.)

But if we put all the focus on ingredients and nutrients, do we miss teaching our kids that food is also about love, pleasure, family, fun? If we openly criticize the food choices (and non-choices) of people around us, have we missed an opportunity to teach our kids about compassion and appreciation for differences? More, do we run the risk of becoming…well, a food buzzkill?

A few months ago – I wish I could remember where – I saw a blog commenter remark that she sees a non-organic apple as “a slow death.” The comment stopped me in my tracks, particularly as several other commenters had just admitted to not always buying organics, for one reason or another. I’m sure that in her passion for healthy foods, this mother did not realize that she had essentially just accused the non-organic-buyers of slowly killing their children, but the message came across loud and clear: your food (and therefore, your mothering)? Not good enough…to a deadly degree.

Ten years ago, that comment would have cut me…and whipped me up into a frenzy of food anxiety. But I’m not going there anymore.

Food is food. Some foods are better for you than others, but non-organics can be part of a healthy diet. Eat things as close to their natural state as you can, but don’t beat yourself up over a refined-flour muffin or the slice-and-bake cookies you bought on a busy night to bring a smile to your kids’ faces. Eat as tradition, eat for taste, get to know your food, enjoy yourself.

Candy has its place for the children in my home. It’s not just about the sweets, either, but the community and the ritual: visiting all the houses in the neighborhood, dumping the bag of treats, sorting and trading with brothers, and friends, rationing out your favorites, and watching the pile slowly dwindle until a few days later, you’re back to your regular old wholesome after-school snacks and dreaming of the contents of your Christmas stocking.

And life is too short to be afraid of food.