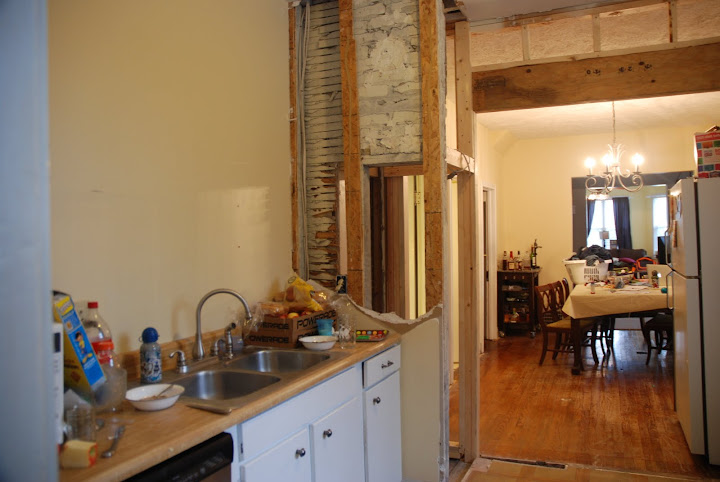 our kitchen and dining room - currently under construction

During the first few years of our marriage and parenting life, my husband and I lived in a series of small, inexpensive apartments. All had bland white walls. All had boring, beige-y carpet. Most had small, dated bathrooms and kitchens.

But the whole “Keeping up with the Joneses” thing never really spoke to me back then. As 20-year-old parents, we didn’t even know where the Joneses lived. Certainly they weren’t hanging out with us at the apartment-complex playground. Most of the other moms I saw while out and about seemed positively geriatric (in reality, they were probably about as old as I am now) and rich, what with their newer-model vehicles and salon manicures. It never even occurred to me to want what they had, though – what would be the point? It was as though we were living on different planets.

But as the years went by, the age gap between myself and other moms started to close – or at least, it seemed to close – and slowly, as Jon and I transitioned out of college-kid food-service type jobs into careers, the income gap narrowed, too. Strangely, that’s when I got my first taste of what it really means to feel discontented with what you have. It’s one thing to tour a mansion when you’re living on minimum wage – it’s such worlds apart from your reality, that you can just enjoy it for what it is without wondering why it’s not yours. It’s another thing entirely to visit with friends who have things that are nice, but not so much nicer than yours. It’s a lot easier to imagine yourself in their shoes…and in their big homes and remodeled kitchens and tastefully-decorated living rooms. And you can spend an awful lot of time and energy worrying about the fact that you don’t have what they do.

I don’t think there’s anything wrong with wanting nice things or trying to improve your surroundings…in fact, it’s a lot of fun, and I get a mental boost from living in a tidy, attractive house. But it’s easy for “wanting nice things” to turn into “wanting nicer things and feeling bad, resentful, or embarrassed because I don’t have them.” How do you keep from crossing that line and falling down the rabbit hole of jealousy and discontent?

I’ve been trying to be a lot more conscious of what we do have rather than what we don’t over the last few years, but it’s not always easy. I’ve shared here that we live in a 100+ year old home that had been stripped of most of its original charm – save some crumbling plaster – and how we were convinced we’d be able to turn it into a showplace relatively easily and inexpensively. Thousands of dollars spent on unsexy things like garage doors and retaining walls later, I realized that there’s a lot more to updating an older home than might meet the eye. Now we’re getting ready to renovate our kitchen. The remodel our budget will allow is, admittedly, not quite up to my initial fantasies. But for the very first time we are actually going to make a major change to our very own home. That’s something I couldn’t even imagine in our first little apartment, 14 years ago.

Yes, sometimes I’m frustrated because we don’t have glossy hardwood throughout or because the tub surround is peeling away from the wall. But then I think about what we do have: a solid foundation, plenty of space to work with and lots of time (if not money) to make our home feel more homey by the year, and I realize that it’s counterproductive – and frankly, pretty spoiled – of me to allow that moment of discontent to take root and grow. Since we all need to remind ourselves sometimes to seek satisfaction, here are some tricks I’ve learned along the way that help me take the focus off what I don’t have and cultivate contentment for what I do:

When I was newly married, I remember my mom telling me about the home she and my dad had moved into when they were first married. “I hated it and couldn’t wait to move because it was so small and outdated,” she said. “But looking back, I wish I had seen its potential. It could have been such a cute little house if I’d just tried harder to make it a home.”

My mom’s words have stuck with me all these years. The truth is that no matter how much time or money I pour into my house, it’ll never be as grand or designer-perfect as some other people’s. But that’s OK. What matters is that it’s my home, the place where my family retreats, plays, relaxes, works, and lives. And whether it’s a ten-bedroom mansion or a small apartment with dingy carpet, home is something to celebrate and make the most of.