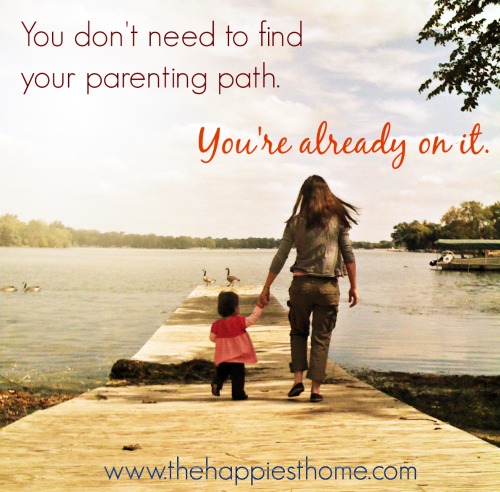 As a new mom – and an observant one, having always been someone who looks for patterns and categories as a way to make sense of things – I became familiar with most of the major Motherhood Labels: attachment, free-range, helicopter, breastfeeding, babywearing, organic, hypoallergenic, you name it.

I also gathered from casual observation and obsessive blog-reading that certain labels seemed to go together: The babywearers co-slept, the breast-feeders stayed at home, the organic people cloth-diapered, the helicopters were more likely to engage in lots of of extracurriculars. (And the free-rangers? I don’t know what else they were doing, but their kids were hanging out by themselves in the park after dark while they were doing it).

Or so I thought. This is where I was wrong, where my tendency to categorize led me astray. This is where I assumed, as new mothers are wont to do, that everyone ELSE had their you-know-what together and that I alone was the one with the…issues.

From where I stood on that little island of new motherhood, it seemed like all the other moms were on a clearly marked path. A path they had chosen carefully and after much research. A path with well-lit signs along the way to guide their decisions on everything from vaccinating to preschools. A path they followed confidently, while I wandered in circles trying to make sense of it all.

Here’s what I thought then: I needed to pick one of those labels I’d studied up on and join its movement, settle into its camp, make friends with its champions. I needed to find my path and stick to it – no matter what. Veering off course, taking an unexpected turn, or changing directions altogether would mean I was weak, or worse: hypocritical.

Here’s what I know now: I was already on my path. My perfectly imperfect mothering maze. And the wandering around I was doing? So was everybody else.

I know, I know. More seasoned moms are rolling their eyes at me right now. You’re just figuring this out now? they think. How sweet.

But for every wise and self-assured mother who knows what I’m talking about already, there is one of you who hasn’t gotten there yet. You’re still looking over your shoulder, waiting for the Parenting Police to revoke your Homemade Baby Food license because you finally caved to the awesome convenience of the squeeze pouch. You feel like you’re the only one conflicted about the flu shot, like everybody else has done their homework and you showed up unprepared to the pop quiz. You’re wondering which camp you belong in, or if you belong at all.

And to you mamas I say this:

You can be a card-carrying La Leche League member who supplements with formula or weans earlier than you had planned.

You can be farm-to-table enthusiast who sometimes treats the kids to a drive-through Happy Meal (and orders a chocolate shake for yourself).

You can be an attached, responsive parent who sets some sleep boundaries that may or may not be met with peaceful acquiescence from your child and may, in the instituting of said boundaries, result in some tears.

You can be a homeschooler at heart who sends her kids to the neighborhood public school. You can be a public school advocate who enrolls her child in private school because it’s the right thing for that child at that moment in time.

You can be a feminist who allows barbies into your house (raises hand) or a pacifist who tolerates – and, yes, even occasionally partakes in – make-believe war play (raises other hand).

You can subscribe to free-range ideals and still follow your kid around the playground, standing protectively underneath those random holes in the SUPER HIGH climbing apparatus just waiting for a broken neck to happen (am I all out of hands to raise? I think I am.)

For a while I thought I was just weird. I’m an extended breast-feeder who never co-slept. I’m sort of fanatical about newborn bonding and yet I had three c-sections. I buy organic produce and rather unabashedly love the Chck-fil-A drive-thru. And I don’t feel like I’m being inconsistent with my values – I just feel like a human being with occasionally conflicting persuasions and an ability to make fun of myself.

And of course I’m not the only one to be made up of conflict and nuance, questions and inconsistencies, flip-flops and flounderings. That’s life. That’s growth. That’s motherhood. It’s à la carte, not prixe fixe.

Realizing this – that making choices around a midline and in-and-out of shades of gray is fundamentally okay, that I am greater than the sum of the individual choices I make as a mother – did two things for me. One, it made me so much more confident and clear about the choices I did make and the things I do care about (remembering, as Meagan said, that it’s OK to care and that it’s also OK not to care about everything). Because the truth is I care more deeply about some issues than others; I’ve changed my mind about a few things; I’ve raised the flag of surrender in some battles and taken up arms in new ones. And I believe, now, that this is not only okay but actually important. I know now this is part of my path.

Two, once I ditched that false assumption that everyone else was settled comfortably and confidently into their “camps”  and acknowledged that I couldn’t be the only one made up of seeming inconsistencies, I began to see the real depth in the other mothers in my life. I saw them wandering, as I was, and I developed a deep respect for the process of finding one’s way – even if theirs was a path that didn’t overlap with mine. I began to listen differently, to observe without jumping to conclusions, and to find commonality in people I never would have thought I would.

Because these nuances? These exceptions to the rule? That’s where the good stuff is, where the learning happens, where the equation that once felt so complicated becomes instantly simple because it’s what’s right for you and your kid in this moment in time no matter what anybody else says.

And I think it would be awesome if we talked about those things more that we talked about the labels. Our quirks and changes of heart. The tweaks we’ve made and rules we’ve broken. What a gift to say to a new mom, “You know what? I love that idea, too, and here’s how I made it work for my family. I know you’ll figure out a way to make it work for you – and hey, if it doesn’t? I know lots of people who’ve gone in a totally different direction and are really happy.”

Hypocrisy is saying one thing and doing something else. But trying one thing and changing your mind, or adopting one philosophy and making some tweaks, or finding out that something you once believed in no longer works for you, or just plain winging it? That’s not hypocritical. That’s parenting.

So I’d love to know: What idiosyncrasies mark your unique path? Where has your wandering taken you? What rules do you buck sometimes, even if it appears inconsistent? (And do you also love the Chick-fil-A drive-through?)