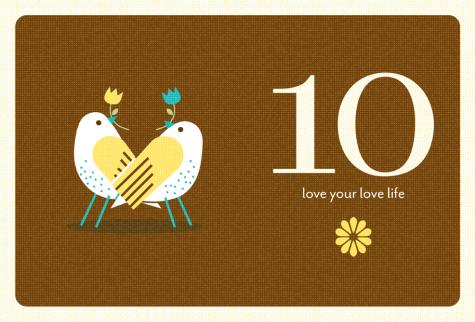 With today being Valentine’s Day, this week seemed a perfect time to broach the topic of love, marriage, and relationships. To the left you’ll see the opener for Chapter 10: Love Your Love Life in The Happiest Mom: 10 Secrets To Enjoying Motherhood. Isn’t it cute? And isn’t that a great goal–to love your love life, rather than tolerate it, put it on the back burner, or grit your teeth and suffer through?

But I don’t suggest that it’s easy. Even as a mom of five kids, I consider marriage much harder work than parenting. After all, my kids come by their faults honestly–they’re still learning, still growing, and it’s my job to help them become thoughtful, self-sufficient adults. But I have a lot less patience for my husband’s faults–and sometimes conveniently overlook my own.

This week I’ll be talking about some of the things I think are the most important in marriage. I’m going to avoid giving you any trite advice, like “go on date nights!” because date nights, while lovely, are not going to fix a shaky marriage…and I believe a really strong marriage can survive without them. I won’t tell you how to get your husband to pick up his socks or do the dishes without being asked, because I haven’t figured out how to do that yet myself–in fact, it may not even be possible, short of implanting a chip in his brain.

What I will talk about is how to put those things in perspective–you won’t have young children forever, and many of the things that make you so crazy now will change and fade as your children get older. I’ll talk about the importance of forgiving and forgetting instead of allowing resentment and anger to take root and grow.

As I’ve shared here before, my husband and I actually separated and divorced early on in our marriage. We eventually reconciled, and have a very strong marriage now. But there was a lot of hurt and drama and heartache in the interim, during which we both learned a lot about ourselves, about forgiveness, and about what’s really important in a marriage and in life. It’s a topic very near to my heart–I actually feel physical pain when I hear about friends divorcing, not because I think it’s always the wrong choice (I know there are marriages that just aren’t working, for a variety of reasons) but because I know what a hard road they have ahead.

On the other hand, I learned a lot about myself as a single mom. I learned how strong and capable I can be when I need to; I learned how to take charge of my own life and quit waiting around for a man to make me happy. It would have been a lot easier for everyone if I’d learned those lessons while still married, but either way, I’m glad I learned them. Maybe some of you can learn from my mistakes and avoid some of that heartache for yourself.

If you’re a divorced or single mom, I’ve got a great, inspiring interview planned for later this week with Candace Walsh, editor of the essay anthology Ask Me About My Divorce, and Theo Nestor, author of How To Sleep Alone in a King-Sized Bed. Candace and Theo will be talking about life, love, and motherhood after divorce.

You’ll also find an interview with Alisa Bowman of Project Happily Ever After. Alisa once felt so hopeless about her marriage that she actually fantasized about her husband’s funeral. Her new book follows her journey after she decided to work on her marriage, and all the things she learned about herself, relationships, marriage and parenting along the way.

For today I want to leave you with a thought grabbed from my other post on marriage:

As in life, as in motherhood, we are not victims of our relationships. We have choices to make every day about the way we interact with our spouses, the way we choose to either build up or undermine our own relationships. And having been on the other side of the fence, I know the grass is rarely greener. It’s so much better, for everyone, if you can find a way to tend the grass you’ve got.

If you could pick one area of your marriage to really focus in and work on, what would it be? What’s your best tip for happier, stronger relationships?