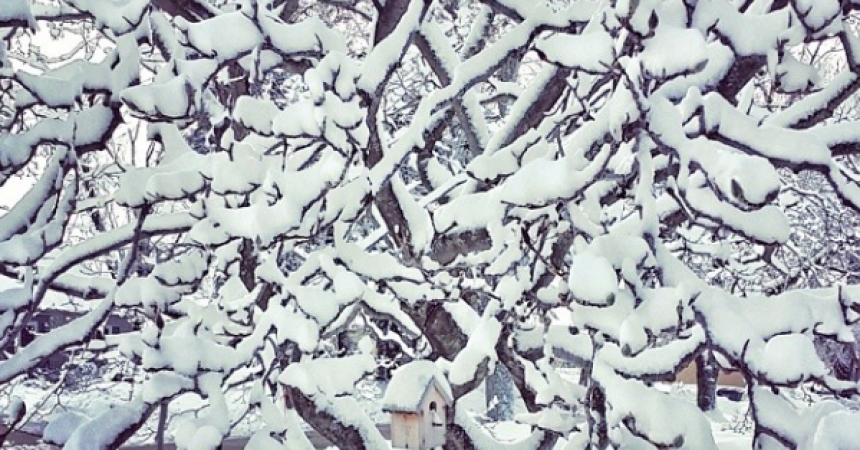 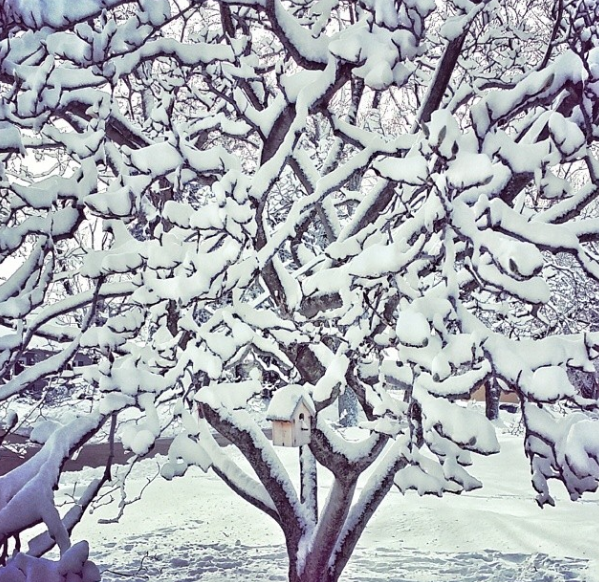 This week marked the first official day of spring. And for those of us in the Midwest and the East Coast and every other place that’s been hit with a particularly hard winter, just knowing the spring is really on its way – even though my patio is still an iceberg and my yard is mostly dingy white and the temperatures hovered in the mid-30s for much of the day – is a huge relief.

Because let’s be real here, people: unless you’re, like, Sarah and live in the land where the sun always shines, this winter has been a doozy. My kids had eight “snow days”, and probably a few school days that really should have been snow days except that administrators realized partway through the season that they were probably going to have to tighten the criteria by which a snow day gets declared, or the kids would be in school until July. 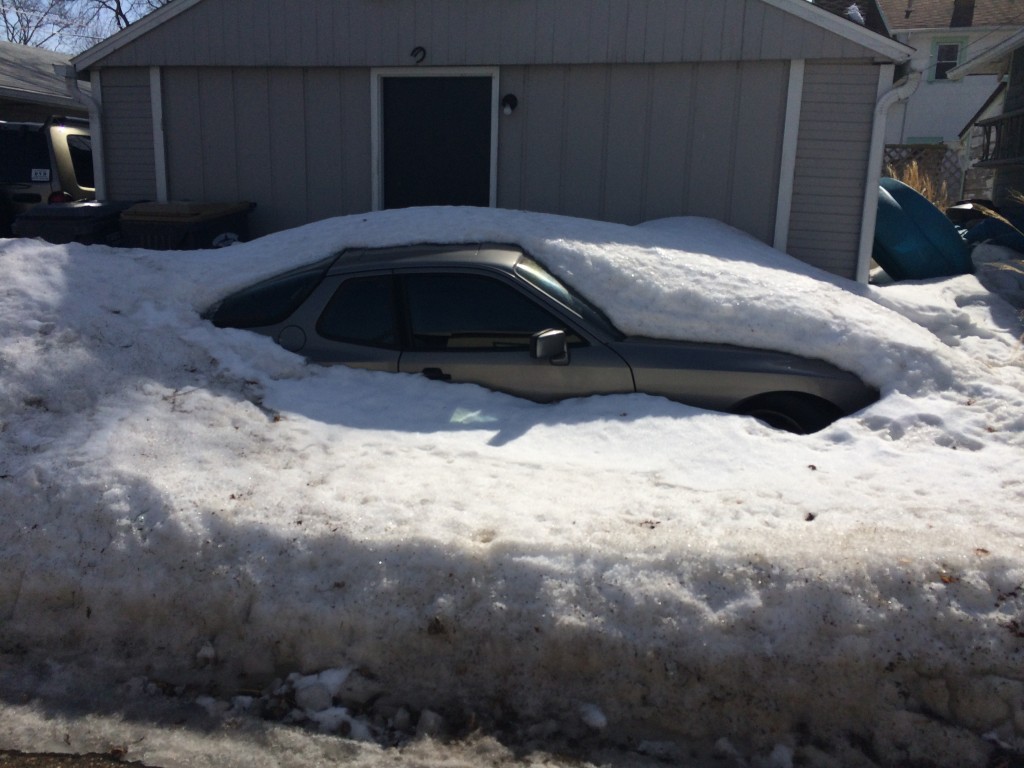 There are cars in my alley still completely buried in snow, only just starting to emerge. Our front yard is made up of varying levels of frozen dog poop, marking one blizzard to the next, like a geologic record of the season’s precipitation. After all, for two months there was never a single melt. It all just kept piling on, storm after storm.

But can I admit something here? As cold and snowy and occasionally pain-in-the-butt-ish this winter has been, I have to say I kept a surprisingly good attitude about it for the last three-plus months (we got our first huge snowstorm and snow day in early November, yo.)

Sure, I’m relieved that we’re moving into spring, and am practically salivating over the idea of summer. But I never experienced that sense of lingering disappointment this year that I usually get in mid-February, when the temps usually slide up above freezing for a day or two, then drop down again, then rise, then fall.

This year, it was all just…cold. And snowy. So every day, I knew exactly what to expect: more cold, and likely more snow. And because I never expected anything else, I was never disappointed when it didn’t come. In fact, I came to rather enjoy the drama of yet another plunging thermometer, the cozy chaos of all of us getting stuck in the house together, all day, again.

When I was a newer mom, I was like I usually am in February: irrationally hopeful. Every time the baby would take a longer-than-usual nap or sleep through the night, every time I’d make it through Target without a single wail or blown-out diaper, I’d think that maybe we’d moved on from the no-sleeping stage or the crying-in-stores stage or the blowing-out-of-diapers stage.

And then, the next time I was holding a wide-awake baby at 3 AM or trying to shush a screaming baby in the checkout line at the grocery store or wondering how to get a completely poop-filled Onesie off over a baby’s head in a department-store bathroom without creating an even bigger mess, I’d get that familiar twinge of disappointment. Oh. It’s not really over yet, is it?

It wasn’t until the third baby that I learned to completely surrender to baby-ness and stop waiting for the less-fun phases to pass (maybe because by then I understood that when one not-so-fun phase passes, there is always another to take its place, anyway.) Much like how, this winter, I didn’t bother keeping an eagle eye on the forecast because I knew it would be just more of the same, with my third baby I stopped watching so anxiously for signs of development, of progress. I knew progress would come in its own sweet time, and that probably the less I obsessed over it the faster it would seem to come.

Because whether you’re waiting for the snow to melt or for a toddler to learn to ask for something without pulling on your pants leg and whining, the progress always does come. Sometimes more slowly than you’d like, and not always in the way you would have hoped. But time moves forward, and one season – literally and figuratively – always passes into the next. 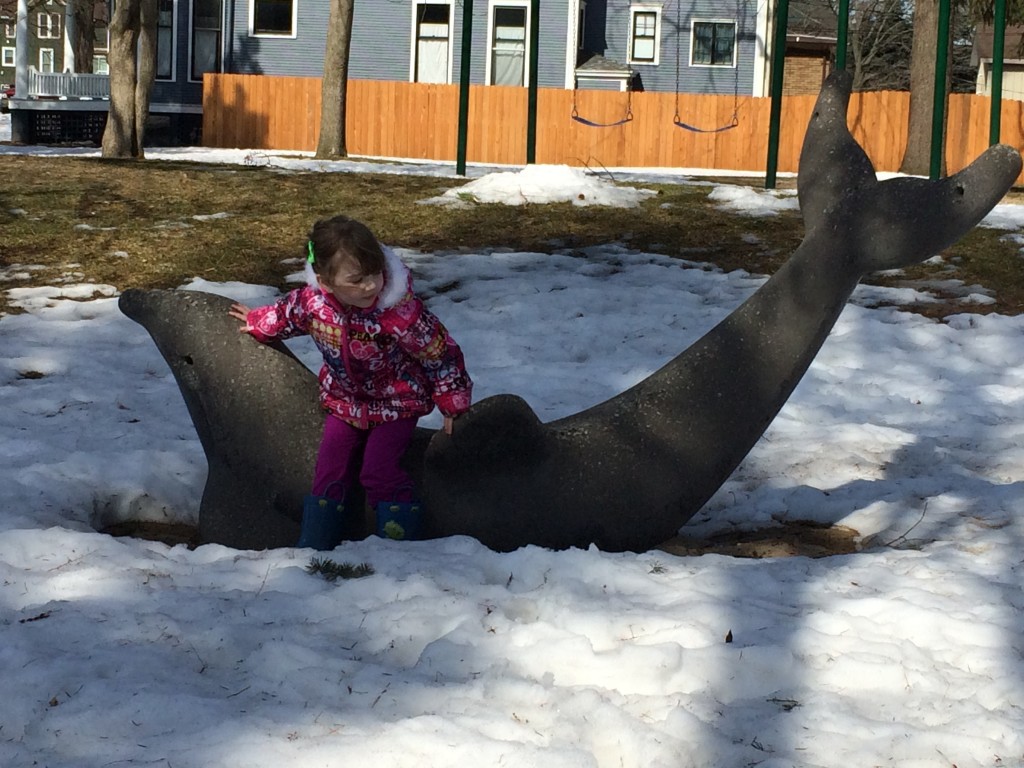 I think that’s why we love the first day of Spring so much in the upper Midwest. It’s not because it suddenly feels like spring: even in milder winters, that’s often not the case. No, it’s because – like that first fleeting smile your baby finally gives you after long weeks of waiting – it’s a marker that reminds us that change is coming, even if we can’t quite see it yet.

I’m still working on keeping a good attitude about late winter and early spring in Michigan. (I know, you’d think I’d be used to it by now.) So I’m trying to approach it the way I finally learned to deal with new-baby-hood: one day at a time. I got good at learning to appreciate the quiet, calm, restful moments when they came, without expecting that they would come again any time soon. Now I’m working on embracing the fact that I might get a 55-degree day, even though it will most certainly freeze again before spring is reallyhere.

I think the trick is to allow those occasional warm days to bolster my spirits, to delight in feeling the sun on my face, without experiencing let-down when the temperature crashes again the next day and I learn that there’s more snow on the way.

Because there’s beauty in all of it, really, the six feet of snow and the poop-covered clothes, even if we can’t see it while it’s happening.

Maybe the beauty of the crying baby in the checkout line is the compassion it’s allowed us to extend another mom, red-faced, sweating, and trying to juggle her crying baby and a debit card. Years down the road, when we’ve moved well beyond that phase, we’ll remember that feeling and offer a helping hand or a sympathetic smile.

Maybe the beauty of the third snow day in a row is that it forced us all to take a hard look at our daily to-do lists, and realize that most of our “must do’s” weren’t really so urgent, after all.

So farewell, Winter 2013/2014. You’ve been a real stinker at times, and I didn’t much appreciate having to cancel two trips due to weather, or the time I wiped out on the ice.

At the same time, I thank you for the multitude of opportunities to throw away the schedule and cuddle on the sofa, and the gorgeous views out my window.

I know that when I look back on the last few months, it won’t be the hassle of getting in and out of our driveway I’ll remember. It’ll be the looks on my kids’ faces when I announced yet another snow day, the way my yard looked completely covered by a blanket of fresh snow, the coziness of holing up with a cup of cocoa and a blanket on the sofa and knowing there’s nothing more important to do and nowhere else I need to be.

Sure, I’m more ready for summer than I’ve probably ever been, but I also have the sense of truly having experienced a winter…rather than just tapping my foot through the transition between fall and spring.

Sometimes you need an, ahem, memorable season (whether a season of the year or a season of life) to wake you up, to snap you to attention, to get you to recognize and relish the passage of time rather than just wishing for the next thing.

Sometimes you just need to notice. And say what you will about this winter, but it got me to notice, all right.

And for that – as strange as it might sound – I am truly grateful.