When I was younger, particularly pre-kids, my relationship with my hair was pretty simple: I wanted it to be as long as I could possibly grow it, to curl it on the weekends, and to sprinkle lemon juice on it in the summer for that “naturally sun-kissed” (in reality, streaky yellow) look.

I think I assumed that at some point my hair would stop being a split-end-riddled, frizzy mess and I’d suddenly look like a Pantene model. But then I had kids, and my long, thick, wavy hair became nothing short of a nuisance. I no longer even had time to curl it on the weekends, and as for applying Sun-In and sitting on the beach for hours? Ha!

So one day in my early 20s, in an impulsive moment, I decided to cut my hair to a little shorter than chin-length. I was terrified at first: it was the first time I’d had short hair since the Unfortunate Locker-mate With Lice Incident of 1988, after all. And I felt like my long hair defined me as a mom who was still young and fashionable and who might, if she just found the right shampoo-conditioner combination, actually look like that Pantene model one day. (It could happen! Right? Right?)

But the stylist was encouraging and I was tired of my heavy load of hair, so I closed my eyes and told her to cut. And I loved the result. I felt so free! So sassy! So much lighter about the head! For the first time ever, I could spend five minutes with a blow-dryer and some product, and leave the house looking polished and grown-up.

Since then I’ve tried halfheartedly to grow my hair back out a few times, but usually give up by the time I can scrape it together into a ponytail and realize that all I actually want to do with it, every day, is put it in a ponytail (which kind of makes the idea of long hair pointless, eh?) Then I cut it off again, rinse and repeat.

The older I’ve gotten and the more kids I’ve had, the more important my hair has become. I guess because I don’t invest as much time in fashion anymore, my hair and seems to define me much more than what I wear. If it grows too long or shaggy, I look unkempt. If the little flippy bits in the back grow too long, I look like Carol Brady. If the cut screams “wash and wear” I look frumpy. The middle-short length is fun, but hard to get just right: sometimes I nail it and love my hair for a week, then it grows an eighth of an inch and suddenly my style is completely derailed.

So a few months ago I started seriously considering going short. Like this kind of short: 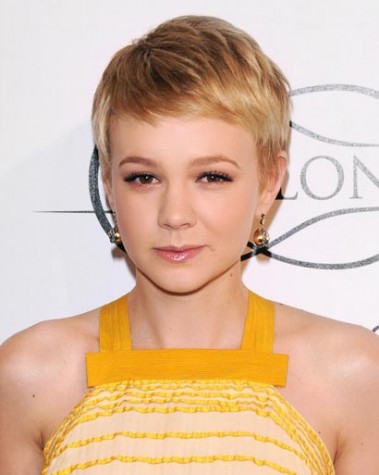 I went to a hairstylist and asked her for a short cut and she was not all that enthusiastic.

“That’s really short,” she said as I pointed to the photo.

“Hm, maybe we should try something a little less extreme and see how you like it.”

I’m sure you can see where this is going. Not being 100% sure I was ready for the pixie to begin with, I caved in to her “compromise” cut, which was nothing even close to a pixie.

This is my (rather wind-tousled) hair two days ago: 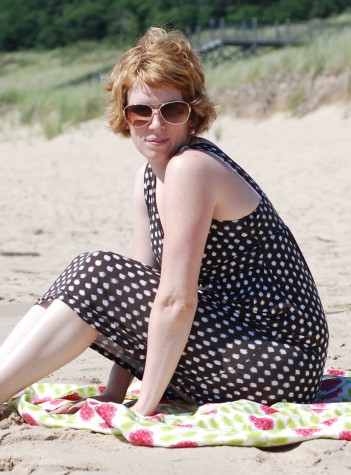 Yes, I am the exact same color as the sand.

It’s pretty short, but there’s still room to scrunch and tousle. It’s short hair that seems like it could be long, and it’s definitely my safety zone. The thought of going much shorter is a little scary. Will I look like a little boy? Will baring that much face highlight my less-flattering features? Will I even recognize myself without my signature fluffs and puffs?

And am I really ready to move that far away from the idea of growing it out again? I know a lot more about my hair now than I did in my teens and early 20’s – exactly what kind of styles and cuts work best for my hair texture and type; the care routines and products that keep it looking its best. So maybe the idea of long hair isn’t a lost cause…if I start growing it now I could have it down to my shoulders by the end of the summer…and then maybe one day I really could have that Pantene model look once and for all.

Nope. I used to see the “mom cut”- the short easy-style do so many of us wind up with – as a sort of giving in to age and a busy life. A kind of giving up, really. And I suppose it is; but instead of giving up, I like to think of it as a surrender. I am getting older, I do have more lines around my eyes, I don’t have an hour to blow-dry, brush and flat-iron every day. And I am not ever going to look like a Pantene model (and not only because I don’t have her hair.) I surrender!

The super-short pixie cut feels to me like a way of embracing that surrender and really going with a style instead of straddling the fence. But I’m still a little afraid to do it.

Clearly, I need a new stylist. And maybe a round of encouragement.

What do you think your hair says about you? Have you struggled with holding on to a hairstyle that no longer suits you or been afraid to go for a new look?