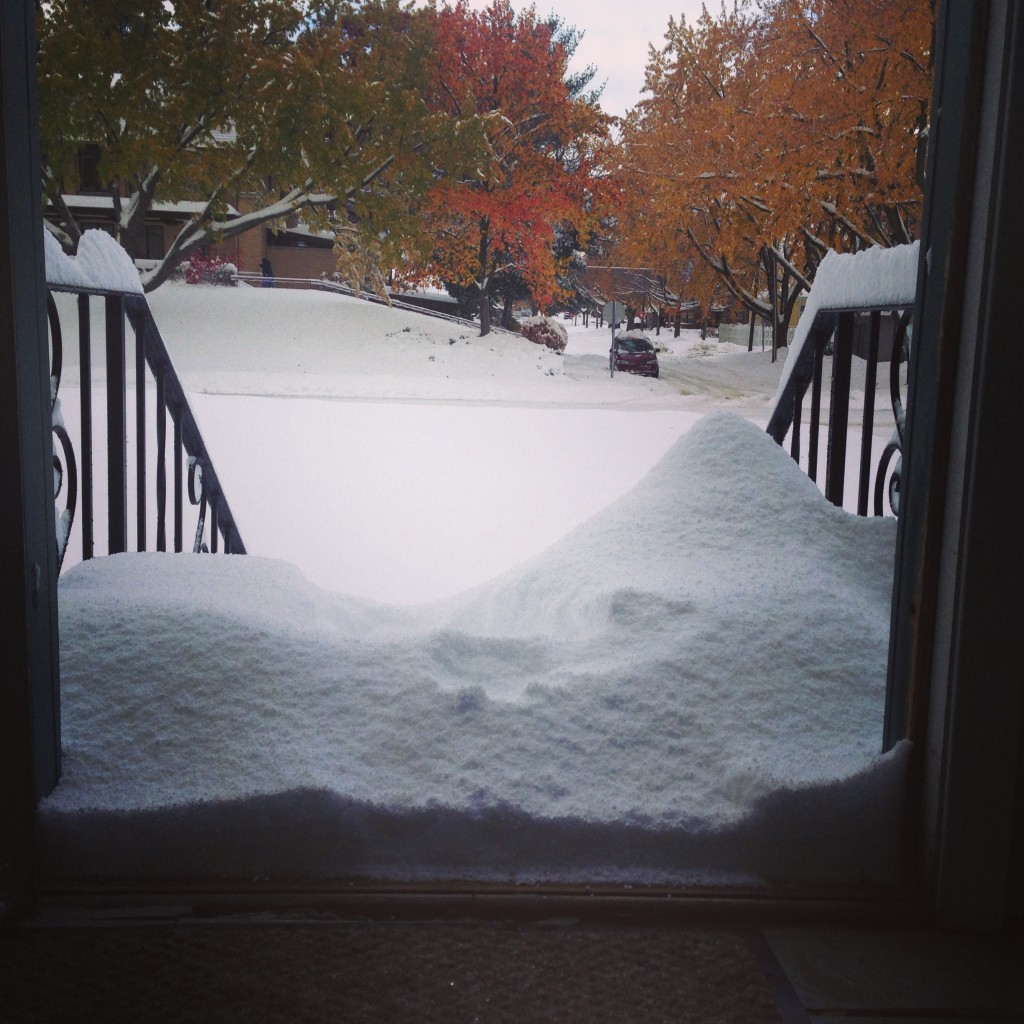 This is the view that welcomed me when I opened our front door Tuesday morning.

Yes, we get a lot of snow here in the southwest corner of Michigan. They call it “lake effect” snow, and it can be bountiful and unexpected – and strangely isolated to certain pockets of the region.

But it’s been many years since we’ve had anything near this kind of snowfall in early November, and we definitely weren’t expecting to wake up Tuesday with the news that our little city – (incidentally, just our city; surrounding areas got much less) received 17 inches of snow in one 24-hour period.

Look! The trees hadn’t even gotten around to dropping their leaves yet. (What a sight it was, later that day, to see the bright reds and yellows and oranges falling in earnest against the white backdrop of the snow!)

Snow days can be so magical. We stayed in our pajamas and ate French toast and bacon for breakfast; then the younger boys dared Jacob to jump in the snow in nothing but a pair of shorts. He was happy to oblige – for a bounty of five dollars:

We laughed, we lounged, we messed up the kitchen and then cleaned it up together. It was a wonderful morning.

Of course, as can also happen on snow days, at some point I started to get kind of – okay, really – cranky.

Maybe it was the third time I had to pull Clara’s mittens off to remove caked-in snow from her wrists, or the third time one of the boys tromped in from playing outside and got snow all over the hardwood floor.

Maybe it was when I had to hide in my bedroom to write and they still kept knocking on my door to ask me questions – inexplicably, since Jon was also home and right in the same room with them.

Maybe it was when I decided to write off getting any work done for the day and figured I’d make a big dinner instead, and the boys all piled into the kitchen pawing at each other at precisely the time I needed to take something out of the oven.

Yes, I had more than one little temper tantrum.

When we sat down to dinner, still flustered and flushed, I paused before taking a bite, and said “You know what? You all got on my nerves today. Every last one of you!”

Forks halted halfway to their mouths, the kids all gave me that uh-oh-mom’s-about-to-blow sideways stare I’ve come to know so well.

Jacob bravely asked what he had done to incur my wrath.

“You came running into the kitchen when I was about to take the roast out!”

“You were smacking around that half-deflated balloon in the dining room and it was really loud!”

“I didn’t do anything, did I, Mom?” William said hopefully.

“YOU? Wasn’t it you who wanted another drink of water when I’d just started the dishwasher?”

By this point we were all laughing as my accusations became more ridiculously detailed – and obviously, once I said them out loud, minor. “Ah, well, you guys – you know I love you, but sometimes, Mom just gets kind of grumpy…and you guys really can be annoying,” I finally finished.

The air cleared, we all dug in and enjoyed the rest of our meal.

I can’t always pinpoint the source of mom-crankiness. Sometimes it comes out of nowhere, triggered perhaps by hormones, perhaps by a day gone too far off the usual course, perhaps just by the fact that living with five children can be really annoying at times.

But I no longer try to force a smile and grit my teeth through it. Our house can be explosive and loud at times, but I’d take the laughter, ribbing and honesty over quiet, bottled-up stewing any day.

And I still love snow days, even if, by the mid-afternoon mark, I’m usually chomping at the bit for the kids to go somewhere – anywhere – that doesn’t require me to struggle with boots and mittens and snow pants and hats.