One of my earliest memories comes from when I was just about Clara’s age (3 1/2) or a little older, when my family went to see The Nutcracker in downtown Chicago. My uncle Jim worked for the Lyric Opera of Chicago, so we got a backstage tour. I remember learning how the stage techs would create “fog” and blow it onto the stage during the performance.

I don’t remember much about the performance itself, except for the fact that I was on the edge of my seat the whole time. It remains one of my strongest memories of early childhood, so it obviously made a big effect.

So last Friday, I was thrilled to head up to Grand Rapids with my sister-in-law, Jenna, my five-year-old niece Ruby, and Clara, to see The Nutcracker performed by the Grand Rapids Ballet.

We’d planned a whole girl’s night out, checking into a lovely room at the Amway Grand Plaza hotel where the girls dressed up in “fancy clothes”: 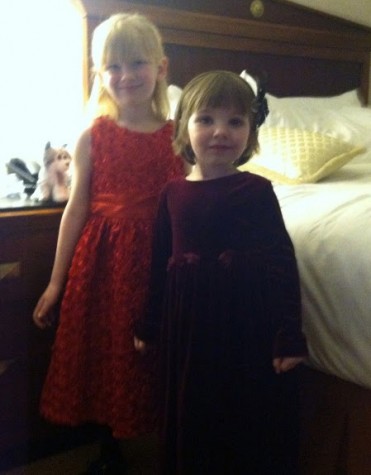 headed to the historic Pantlind Lobby for more photos: 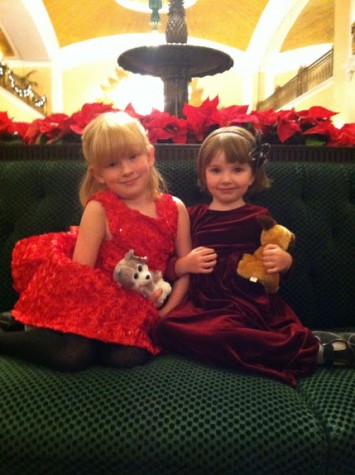 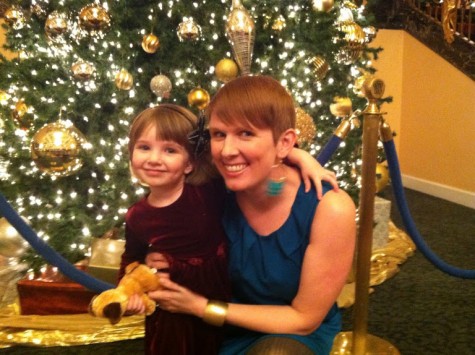 and then took the Skywalk to dinner at Six. One. Six. at the adjacent JW Marriott, where it was lovely to be able to enjoy a reasonably quiet, grown-up dinner with my daughter, who is finally old enough to sit still and eat in a fine dining establishment. (To be on the safe side, though, we did book our reservations for 5:30 PM!) 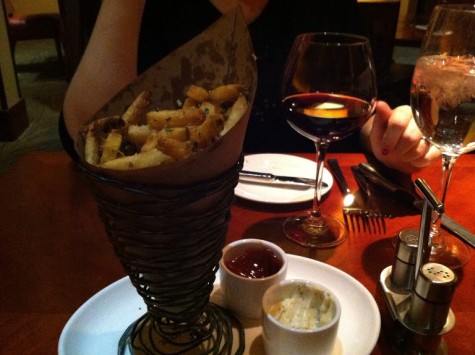 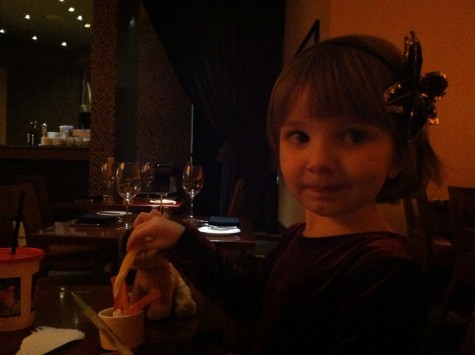 Can I take a moment here to say I was really impressed with the kids’ menu at Six. One. Six.? The meals – which were fresh, “real” food, and included veggies with dipping sauce and dessert – were quite reasonably priced when you consider that even boxed mac-and-cheese costs $5 at most chain family restaurants.

After dinner we headed to DeVos Place to see the performance – but first, we got a backstage tour. 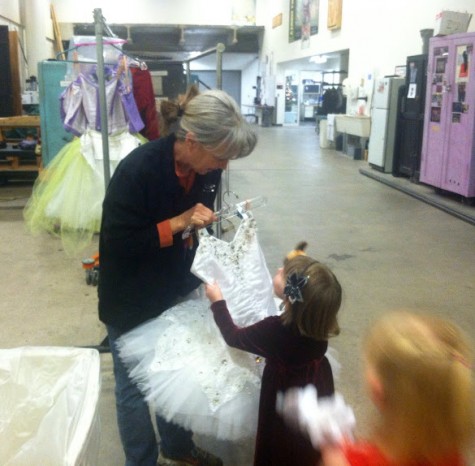 By this point, we were somewhat aware of what was happening in Connecticut, but I purposely shielded myself from much knowledge at that point. Instead, I checked out of Twitter and email and concentrated on something I could contribute to, something right in front of me: my family, my daughter and our evening together.

When we finally settled into our seats, the girls were so excited they were ready to burst. Clara, ever the social butterfly, kept tugging on the sleeve of the man next to her and saying “Isn’t this going to be amazing?”and  “Aren’t you excited?”, while Ruby demonstrated her “sitting still and paying attention” skills before the curtain even opened.

Finally the show began! It was beautifully done – everything from the costumes to the choreography and the music, performed by the Grand Rapids Symphony. 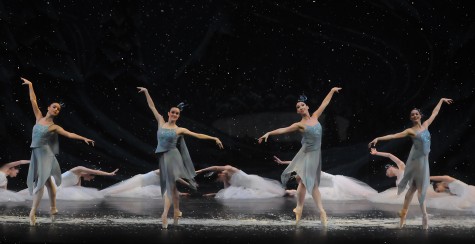 The girls were rapt throughout most of the performance. At one point Clara, not quite tall enough to see from her seat, climbed up in my lap and rested her head under my chin. I took the opportunity to wrap my arms around this quickly-growing child, my baby, my little girl. I smelled her hair and whispered in her ear, “Look! Do you see that some of the dancers are the wind, and the other are the snowflakes?”

“Oh, isn’t it beautiful?” she stage-whispered, and my heart squeezed itself.

But every now and then there are those transcendent moments, too. Like when you’re holding your only daughter on your lap, watching the same performance you remember watching with your own mother decades earlier, consider the way it affected you for the rest of your life and wonder if it will do the same for her.

Or when you see a spark of something in your child that you recognize as being of yourself. Or when a child amazes you with his creativity or kindness or talent.

No, those moments don’t happen very often, but that’s what makes them special. And truth be told, they seem to happen more often when I slow down and take the time to notice. If there’s one thing this week has reminded me of, it’s to take the time. Notice.

There has been a lot of sadness in the world this week, but there’s also the potential for infinitely more joy. And that is as it should be. Really, that’s how it has to be.

Let’s allow their excitement and joy and optimism to infect us. Let’s notice those transcendent moments. Take a break from social media or the news or some other day-to-day drudgery. Go see a local production of The Nutcracker or A Christmas Carol. Bake some cookies (even if not from scratch), sit down and write out a few cards (only to the people you really want to send one to, and who cares if they don’t feature a family photo and don’t get there by December 24?) Watch Elf or A Christmas Story. Do a good deed for somebody else. Embrace an imperfectly perfect holiday.

Our children will not be small for many Christmases. Let’s not squander this one.

The only way to combat fear and sadness is with optimism, joy and gratitude. Luckily for us, our kids are a constant reminder. So let’s let them lead the way.

Merry Christmas and Happy Holidays To You and Yours.