The debut novel of mom of two Camille Noe Pagan, The Art Of Forgetting.

Long before I ever penned my first magazine story, I dreamed of being a fiction writer. In my early 20s, before I’d started writing nonfiction seriously, I started several novels which all these years later, still remain in various stages of unfinished-ness. As it turned out, the magazine and web and nonfiction book writing I love so much have left very little mental energy and time for my other literary love, fiction.

That’s why I’m so impressed with today’s interviewee: writer, blogger and now fiction author Camille Noë Pagán. Camille and I have known each other via online freelancing writing communities for several years, and when I met her, like me, Camille’s energies were focused on magazine writing and her young family. But a while back Camille joined a fiction challenge, actually stuck to her goal of writing regularly and finishing her book, and the next thing I knew she was announcing that she had received a publishing contract for her debut novel, The Art of Forgetting.

Here Camille shares how she made her dream come true and how she balances raising young children with a busy writing career.

Meagan: Tell us a little about your book and how you got the idea for the story.

Camille: The Art of Forgetting is about two long time friends, Marissa and Julia, and about how their uneven friendship evolves after Julia suffers a brain injury. I love stories about friendship, so when I came across research about women and brain injury while writing a story for Women’s Health a few years ago, I decided to combine the two topics, and Forgetting was born.

Meagan: You were a successful magazine writer before you decided to delve into fiction. Was writing a novel a long-time dream of yours? What made you finally decide to just go for it?

Camille: I can’t remember a time when I didn’t want to write books; magazine journalism actually was a much later goal. That said, I was in my early 30s when I wrote Forgetting, and I can’t imagine that I would have had the insight in my twenties to write a decent novel. I also needed the right idea; my goal as a novelist was to write something I would really want to read myself.  I hadn’t come up with anything that fit the bill until I had the lightning bolt of inspiration for Forgetting.
Meagan: ﻿I liked what you said about needing the right idea. I’ve started several novels that I could just never seem to build up steam on. Instead of writing our unfinished efforts off as failures, maybe writers need to extend ourselves some grace and not try to force ourselves to follow through on ideas that just aren’t working?

Camille: I actually started five novels (and I’m not being hyperbolic here—literally five!) after Forgetting. Some were only a few pages; one draft hit 20+k words. Each time, I could tell that something just wasn’t working. Right now I’m working on something that feels right, even though I’m not 20k words in. It’s like I just know I’m sitting on a topic that’s magical and I strongly feel that it will hold my interest all the way through. So, yes, I totally believe in extending grace to yourself as a writer; if you keep trying, the dots will eventually line up and you’ll write the whole thing. (And trust me, by the time you’re done, you won’t think it’s gold, but you’ll know you have something you can polish). All the crap that you write in between is healthy, anyway, because it ultimately makes you a better writer.That’s my take on it, at least. I know a lot of writers have a very different approach.

Meagan: I’m sure people are always asking when you find time to write, but as a work-at-home mom I’m also interested in hearing how you managed to set aside time to work on something as uncertain (and, initially at least, unpaid!) as a novel when you had other, putting-bread-on-the-table work competing for your time and attention.

Camille: My family relies on my income—and that income is freelance, which made pursuing fiction seem even scarier, because as you say, writing a novel isn’t a paid gig. My answer to this conundrum was to put aside time in the evenings to write. Almost every night (I usually took Sundays off) after putting my daughter (then an infant; she’s three now) to bed, I sat down at my computer. I’d also use bits of downtime during the day—like between phone interviews for magazine stories—to edit my novel draft. I had a couple really slow weeks in the middle of the summer, and I used that extra time, too, to write fiction. It doesn’t sound like a lot, but in under five months, I had a rough draft on my hands.

Meagan: Tell us about the help you use. Do you have paid child care, cleaning help, an assistant, help from family or friends?

Camille: I don’t have full-time childcare; part of my motivation for going freelance seven years ago was to be at home while my children (in addition to my three-year-old, I have a six-month-old son) were babies. 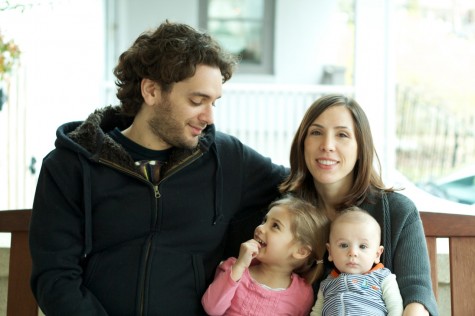 The result of this is a strange, eclectic schedule: my daughter is in preschool two full days a week, and my younger sister, who lives with us, watches one or both children about fifteen hours a week. My husband also works from home, so we switch off with the kids during the workweek, depending on who has more work. So essentially I work a full-time job on a part-time schedule, and it works the majority of the time.
Every once in a while, I start muttering to myself like a crazy person and wishing for a full time job. Then I go take my son for a walk in the middle of the day and remember that I’m the luckiest woman in the world to have the worklife that I do.

I have used housecleaners before, but I don’t consistently because I’ve had a hard time finding the right person. I dream of the day that I can hire an assistant. In general, I’m all for getting help when you need it. There’s no way for one woman to be equally good at all things, so why fake it or work so hard that you burn out (which makes you of no use to anyone)?

Meagan: What is your best piece of advice for turning a dream into reality…especially for busy moms?
Camille: Find one hour a day to pursue your passion, and make that time sacred. My family knows that from eight to nine(ish) at night, I’m writing, and they don’t bother me. I think that dedication is more of a habit than an ingrained trait, and I’ve had to train myself not to get caught up in busywork or the black hole of the internet (I could lose days on Twitter alone) during my writing time. I don’t want to look back on my life and think that I missed out on the things that were truly important to me because I was busy cleaning house and trolling on Facebook.

Thanks so much to Camille for sharing with us! I hope you’ll check out her great blog, The WAHM Diaries. And please take a look at The Art of Forgetting – I’m in the middle of it now and the premise and storyline are unlike anything I’ve read before in contemporary women’s fiction. It’s a serious story, but wrapped up in fun, entertaining reading. For any author, the first week’s sales are vitally important to the overall success of the book, and The Art of Forgetting came out a week ago tomorrow. So if you’re thinking about reading it, help a fellow mom out by ordering your copy today!

I also want to highlight that Camille managed to finish a rough draft of her novel, working it in around her infant’s naps and busy work schedule, in five months. What a huge reminder that, either way, the next five months of your life are going to go by whether you’re doing anything to work toward a dream or not. Where would you like to be in five months?
Tags:books interviews