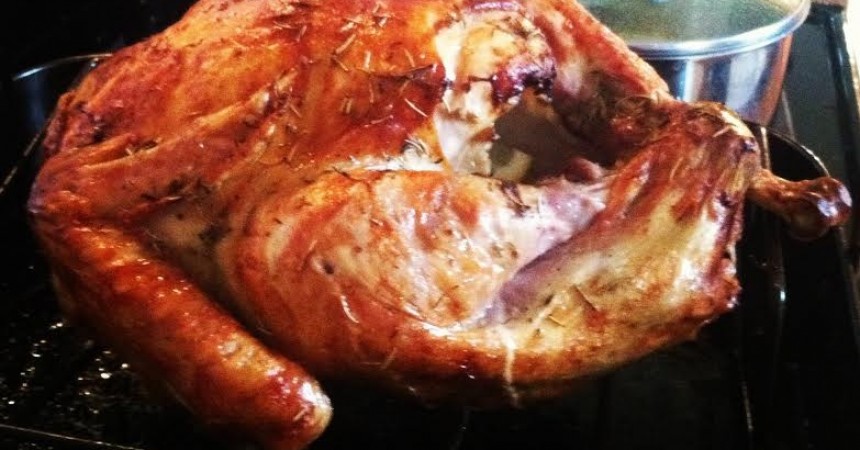 It’s Thanksgiving week! Sarah and I thought we’d share the recipes we’re planning for our families this week, along with a few stories about our Thanksgiving plans. Wishing you a wonderful week of planning, sharing and cooking with your own families! -Meagan

This is the first year I’ll be cooking most of the Thanksgiving meal for my in-laws, and I’ll admit, I’m a little nervous about the turkey! Luckily I got some practice last year, when I roasted a turkey for the first time for dinner with Jon and the kids.

It turned out pretty good, so this year I’m using a similarly super-simple roasted turkey recipe. No brining, no frying, no stuffing…just butter that baby up and sprinkle it with herbs. I am planning to use this guide from Simple Bites.

I figure I can experiment later, when I have more practice pulling together the whole meal.

So far, here are the sides I’m planning to make:

Scalloped Potatoes: Scalloped potatoes have become one of my favorite things to serve the family: they’re easy, flexible – you can use a variety of different kinds of cheeses, and swap milk for cream if you need to – and they seem to impress people even though they’re so simple to make.

I made these cheesy, garlicky scalloped potatoes gratin the last time I had gouda in the fridge, and they were a hit. Since I once again have a wheel of gouda in need of a purpose, I think I’ll make them on Thanksgiving too!

Roasted Sweet Potatoes and Brussels Sprouts: Growing up my mom always had canned sweet potatoes or yams on the table at Thanksgiving. I’m not really sure why, because they made us all gag and I’m pretty sure they never actually got eaten. Why bother?

Since we’re already going pretty heavy on the creaminess with the scalloped potatoes, I figured we could serve some of the veggies a little more simply dressed. with a blend of roasted sweet potatoes and Brussels sprouts. This dish is delicious, really easy to make, and at least hints at Thanksgiving tradition. And I’m so familiar with it that I don’t have to worry about following a recipe (which I’m horrible at, by the way) or screwing it up. 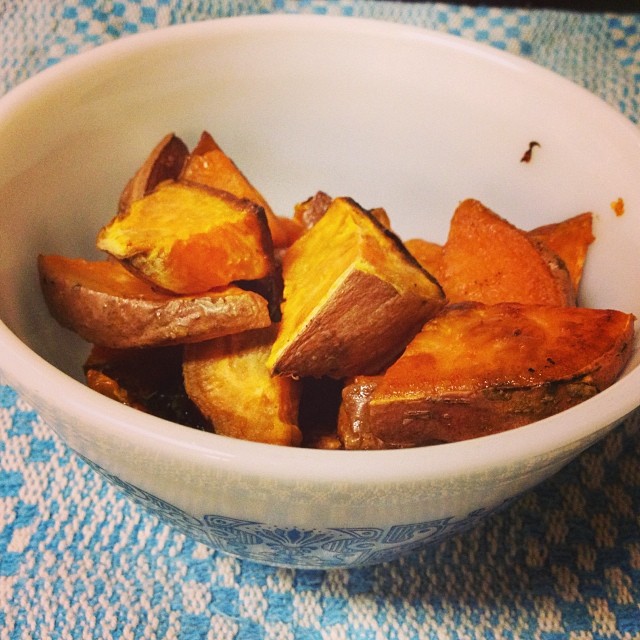 roasted sweet potatoes on our table a couple weeks ago. Can’t get enough.

Here’s how to make roasted sweet potatoes and Brussels sprouts the way I do it: Preheat the oven to 400F. Wash the potatoes well and cut them up into approximately 1-inch cubes (leave the skin on – it tastes great and is packed with nutrition!).

After washing the sprouts, use a sharp knife to remove the hard ends and any tough outer leaves. You can cut them in half if they’re big, but I usually leave them whole. Put the two together on a cookie sheet, drizzle generously with olive oil and toss to coat. Sprinkle with kosher or sea salt, and put in the oven for about 25 – 30 minutes, until they get nice and caramelized and brown.

You can top with Parmesan or seasonings if you like, but I serve them straight up. They’re so flavorful on their own!

And that’s all I have to cook. My mother-in-law is bringing pumpkin pies, green bean casserole, and her dressing, which everybody loves (and I figure I can’t totally overthrow all the traditions my first year as hostess!)

And some childhood traditions never die: I still expect supermarket brown-and-serve rolls on the table every year, plus – don’t yell at me – the cranberry sauce that comes out of a can in one gelatinous glop. I don’t care for it, but the kids absolutely love it, and would probably cry if I suddenly served up the made-from-scratch kind. Baby steps, people!

The one item I’m still torn on is mashed potatoes. Yes, I know they are a Thanksgiving tradition. But I can never seem to get mine totally lump-free, and Thanksgiving just doesn’t seem like the proper time for my usual “smashed” potatoes. And with everything else I’ll have going on, I’m not sure I want to fuss with peeling and mashing. I’m actually thinking about buying the kind that come pre-made in a bag so that I have one less thing to prepare. What say you – are mashed potatoes a Thanksgiving non-negotiable?

We almost always get together with a HUGE crowd of family and family friends on Thanksgiving – mostly friends, since my immediate family lives nearby but I don’t have a large extended family in the area. It’s also not unusual to “collect strays” as the day nears, extending dinner invitations to those who don’t have plans. This year we are up to at least 20 adults and a handful of kids already (we’ll be nearby at the home of a family friend, so no pressure on me to host the crowd)!

I’m contributing this herb and apple stuffing recipe from Ina Garten. I say “stuffing” but technically this one is dressing, because we don’t put it inside the bird (to complicate matters, Ina’s recipe IS actually for in-the-bird stuffing, and I still make it and serve it as dressing). I’ve made this every year for several years, and I always go through the same thought process:

I always make this dish first thing in the morning, and then instead of stuffing the bird I put it in a glass baking dish and cover. To warm before the meal, I just stick it in the oven with whatever else is in there for about 20-30 minutes before dinner.

In this picture, I’m making this stuffing (maybe for the first time?) in 2007. I was about 4 months pregnant with my first baby. I can assure you I will not be wearing heels and make-up this year when I hit the kitchen (hopefully by dinnertime I will be): 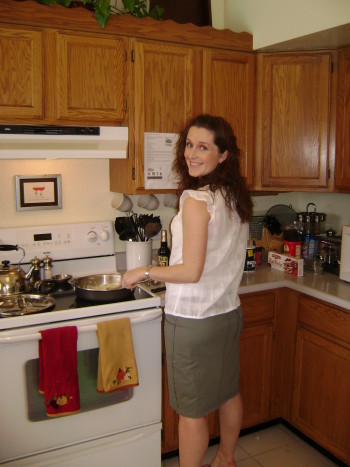 We’re bringing one additional side this year, and it’ll be a non-broccoli, non-potato vegetable side. My husband (the chef in our family) is in charge of this one and he’s looking at carrot recipes. We love to roast veggies (brussels sprouts especially) the way Meagan described above, but we’re not sure how much oven space will be available, and when, at our hosts’ home. So we’re on the lookout for something that can be done semi-ahead of time. Any ideas??

Oh yeah, I’m bringing The Kids (mine are 5, 3, and 10 months). They are the only kids at this gathering, which means I’m also bringing as many tricks up my sleeve as possible to keep them happy and occupied. I’m thinking about these free printables, and maybe a movie to put on during that frantic final hour (it’s frantic at your house too, right? happy, but frantic??).

Happy Thanksgiving, friends! If you have recipe links or plans to share, leave us a comment and tell us what’s on tap for you this week!