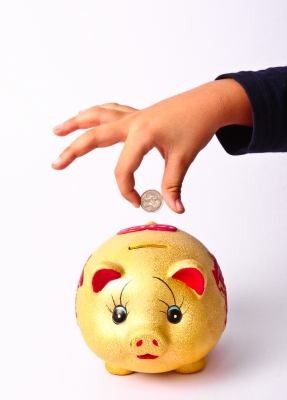 Despite my parents’ best intentions, I was rather financially foggy when I reached adulthood, and it took me quite a while to take control of our cash. So I’ve felt a lot of pressure to help my kids walk a steadier path – and I could tell, from  our discussion on “keeping up with the Joneses”, that a lot of you are feeling the pressure, too.

As an over-analyzer myself, I know how easy it is to get overwhelmed by details and research and trying to find the “best” way to talk to kids about finances. But what I’ve learned about about managing my own money is that my behavior and attitude matter more than the specific details of my financial plan. And I’m finding that also applies strongly to the way I teach my kids about money.

Here are four tips I’ve discovered along the way:

It’s tempting to just say “We can’t afford it!” or “Money doesn’t grow on trees!” when your six-year-old asks for a new toy, but that doesn’t really do much to teach him about how to care for that hard-earned cash. If instead, you talk often about the way you make your budget, why you need one, and how you decide what to spend money on every month, your child can understand the big picture – that we should control our money, not the other way around. And that applies regardless of whether you happen to have twenty bucks in your pocket or not.

A few months ago I overheard a conversation between my two younger sons in the backseat. Owen, my five-year-old, was lamenting the fact that I’d told the kids they couldn’t sign up for a membership to an online computer game at five dollars a month.

“Did you hear that, Will?” Owen said conspiratorially. “Mom doesn’t even have five dollars. I have more money than she does!”

I actually did have five dollars, but it was earmarked for other things. However, I hadn’t really explained that to Owen. I’d been distracted by looking for an address when he’d asked me for the game subscription, and because I didn’t have a thorough response ready to go, I’d said something along the lines of, “We don’t have money for that.” Obviously, my meaning went right over his head.

That experience reminded me that it’s a good idea to be ready to seize these teachable moments with some go-to messages so that even when I’m distracted, I have a ‘script’ I can refer to again and again. After all, it’s not like I can’t predict my kids will ask for something that’s not in the budget…they do it, oh, about once an hour.

Whenever one of my boys ask for something that is not in the budget – which is pretty much always as we rarely buy toys outside of Christmas and birthdays – I rarely just say “no” right off the bat. They feel empowered when I give them options: they can earn the money themselves by doing work around the house, for example. Or, they can put the item on their birthday or Christmas wish list. Generally they keep a running list all year long that changes as they lose interest in certain items and become more interested in others. Putting them in charge of getting the coveted object helps them prioritize and recognize how sometimes that thing you were so sure you wanted last month just isn’t that fascinating anymore.

When my oldest boys were getting big enough to start collecting an allowance, I spent a lot of time reading different opinions on the ‘best’ way to do it. Some experts argued that money should always be tied to chores, so that children learn that you have to work to earn. Others maintained that chores are just a part of being part of a family and allowance should be kept separate. I was so conflicted over which was the “right” approach that I couldn’t seem to get started.

As the boys got older, though, I learned that the exact formula for teaching kids about work and money doesn’t really matter; what matters is that you do and say something. A points system, monopoly money they can cash in for treats, cold hard cash…as long as you’re helping kids make the connection between work and earning and teaching them about budgeting and saving, you’re doing your job. The method is just a tool, and like any other parenting decision there are many valid tools to choose from. You might also find, as with sleep and discipline, that different kids respond to different techniques.

So just do it. Pick a system that’s easy to start, doesn’t require a big investment or commitment, and is simple to maintain. Come up with a few key messages about money that you’d like your kids to understand, and return to them again and again. And go.

Don’t delude yourself into thinking your kids will be perfect with money forever if you get it exactly right- we all make mistakes, and even financial whizzes occasionally wind up with spendthrift kids. What’s important is that by talking about money early you’re laying a foundation that will help them make fewer mistakes and learn from those mistakes faster. Which is the same for anything in life, right?

I’m still learning when it comes to kids and finances, so I’m hoping to learn from all of you, too: how do you talk to your kids about money? What strategy works best for you as far as chores, allowance, savings, etc? Do you use a particular tool, book, or plan?

I was happy to partner with MyJobChart to bring you today’s post and help support our money series.