This post was written in partnership with Responsibility.org as part of the #TalkEarly intiative. 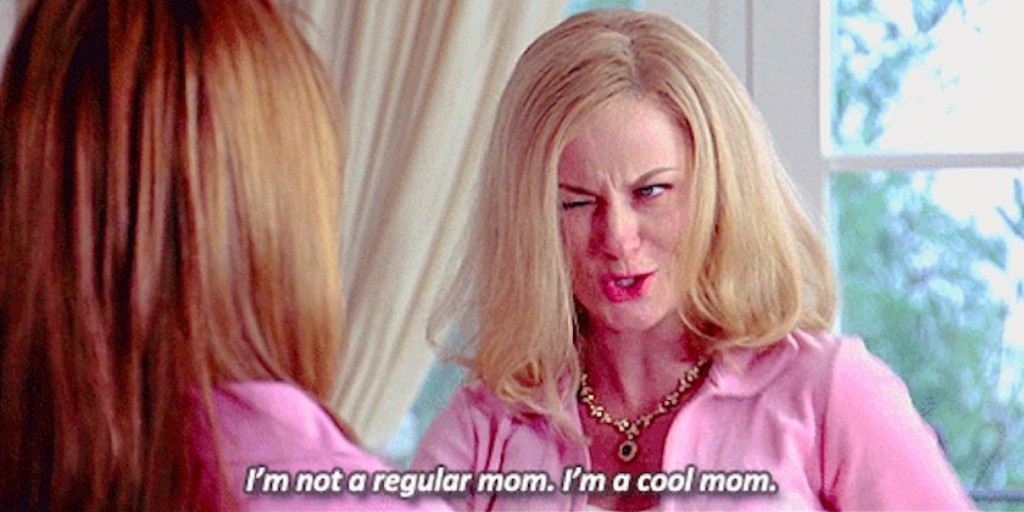 “Is there alcohol in this?”
“Oh god, no, honey, what kind of a mother do you think I am….why, do you want a little bit? Because if you’re gonna drink, I’d rather you do it in the house.”

Hands-down, this is my favorite scene from Mean Girls, in which the mother of the top mean girl herself tries with wince-worthy eagerness to be seen as “a cool mom” by offering up everything from cocktails to condoms to her teenaged daughter’s friends.

I remember the “cool” parents of my high school friends: the ones who’d pretend not to noticed the kegger going on in the backyard; the ones who’d lie for you if your parents called and you weren’t where you were supposed to be; the ones who’d actually supply the booze – and a “safe” place to consume it – themselves.

I once fell asleep on the floor with a bunch of other kids at a male friend’s house party, and woke up to find his mother casually stepping over me on her way to the kitchen. “Oh, hi, honey,” she said as I gawked – I’d assumed she wasn’t home and had no idea what was happening in her living room, and to say that I was flustered to find out she’d been there the whole time would be putting it mildly. And, to be honest, even at the age of 17 I felt a little judge-y about it. Aren’t parents supposed to, you know, PARENT?

Now that I’m an adult with my own teenagers, however, I have a lot more empathy for parents who find themselves compelled to be “cool” by allowing, or even assisting in, activities that they’re personally unsure about. The world is a big, scary place when you have teens, what with their rapidly-developing bodies and accompanying hormones, access to alcohol (not to mention substances we may never even have heard of,) and cars to get them from place to dangerous place.

There are no guarantees when it comes to how kids will turn out, and never does this become more clear than when they’re old enough that we have to stand back and let them start dealing with the world on their own terms. So I definitely understand the urge to cling a bit by providing a “safe” place to experiment with alcohol.

Here’s how I see it: what my teens need from me – along with love and support and food and a roof over their heads – is to know that I’m in charge. They’ve entered a phase of life where they have the physical ability to do almost anything they want, but not the emotional or mental maturity to handle those abilities without guidance. It’s my job to set limits to give them boundaries and help them feel like someone is in control.

That doesn’t mean I think all parents need to guide and set boundaries in exactly the same way.  I know I’m both more and less lenient about certain video games or movies, allowable language, or what constitutes an acceptable report card than are some of my kids’ friends’ parents.

I also don’t think allowing a sip of wine at the dinner table or a little champagne on a special occasion is even close to the same thing as handing your teenager a six-pack of beer and letting them have at it (I should point out that many states do allow underage drinking when done at home under direct parental supervision, but none I know of allow kids to drink at home unsupervised, or allow kids who aren’t yours to drink in your home.) To some degree, I do agree with the idea that removing a bit of the “forbidden” appeal of alcohol can de-mystify it – especially for kids who are limits-testers by nature.

But can we all agree that actually helping kids consume intoxicating quantities of something that we know can affect their brain health and decision-making abilities – during a time when those decision-making abilities are already hormonally and developmentally impaired – is just a bad idea, and probably does more harm than good? (Research appears to bear this out, by the way: studies have shown that kids who are allowed to drink regularly at home are more likely to develop problems with alcohol.)

More than anything, though, my issue with letting kids party at home is this: We are the grownups. They are the kids. Trying to be the “cool parent” by allowing the kids to “get away” with things under my roof seems to go against the natural order of things. Yes, I want my kids to confide in me, to come to me when they have problems…even tricky ones. But I also want them to know I won’t always approve. My kids are some of my favorite people, and I hope I’m one of theirs…but we aren’t exactly friends, and I’m just fine with that.

Several months ago we found out that my oldest son and a few of his friends had gotten into the liquor cabinet while we weren’t home. (First rule broken: no friends over while we are gone.)

Jon and I reacted inelegantly, it’s true: we were embarrassed (one of the other boys’ moms let us know after her son returned home with boozy breath,) and we weren’t sure of the right thing to do. We ranted and raved at Jacob when we got home, then took a full day to come up with the right consequence. None of the theoretical scenarios we thought we might one day encounter seemed to fit, and we struggled to make enough of the situation without making too much of it.

So no, our reaction wasn’t perfect. And it’s possible his eventual punishment – two weeks of grounding – was either overkill or insufficient. But to my thinking, the most important part was that we reacted. We didn’t communicate perfectly, but we did make it clear that we had an expectation, that he’d let us down, and that it wasn’t OK.

Will Jacob drink again before he turns 21? I can’t say for sure, but he’ll certainly have plenty of opportunity to over the next three-and-a-half years. There is alcohol in our home, and it’s not under lock and key. Certainly, if any of my kids was motivated enough to get into it, they could without too much trouble. I’m not naive: I know that experimentation happens, even in groups of “good” kids, even when parents set clear and consistent rules.

But that doesn’t mean I have to condone, support, or encourage something illegal, risky, and unhealthy now. To me the “I’d rather have it happen under my roof” mindset just makes it easier and more justifiable for a kid to take even bigger risks outside the home, and blurs the line between “Mom” and “laid-back boardinghouse owner” – a line I am committed to keeping very clear.

None of this stuff is easy, but I think we make it easier when we allow ourselves to figure it out as we go along. As a parent, I neither have to be perfect nor perfectly consistent. It’s OK for me to be unprepared for an unexpected situation, or to blunder in my attempt to parent well. It’s even OK for me, sometimes, to create rules that might seem arbitrary to my kids. Because part of being a kid is knowing that, while your parents may always love you, there are certain things that just aren’t OK.

I’m not a perfect mom, and I’m not a “cool” mom. But in our house, I am always the Mom…no question about it.