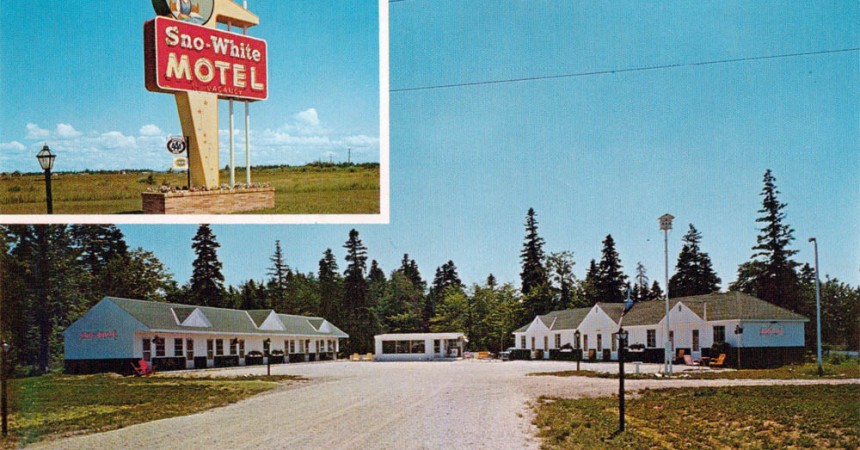 My parents separated when I was five years old, and soon after, my dad moved about eight hours away from our cold northern Michigan hometown. He had every-other-weekend visitation, Friday through Sunday, which meant that my siblings and I spent a lot of time in motels, including the Sno-White, pictured above.

Every now and then one of us would forget our swimsuit, but no worries: the front desk at several of these old-fashioned motels had a supply of disposable suits. They were made of a plastic-covered paper material, kind of like one of those red-checked party tablecloths, but a little more water-resistant. They were horribly unflattering and not particularly comfortable, but in a pinch, they got the job done. 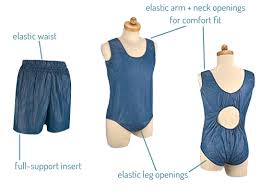 I forgot all about disposable swimwear until one day, many years after the last time I’d worn a throwaway suit, when Jon and I took Jacob and Isaac – who were then about three and one – on a trip and realized, while unpacking, that we’d forgotten Jacob’s swimsuit.

“What?” Jon said as if he hadn’t heard me right.

“You know – a paper swimsuit. The disposable kind? They probably have them here.”

“What are you talking about?”

I tried to explain, but Jon wasn’t having it. He was so incredulous about the very idea that there could, or ever would, be such a thing as a disposable swimsuit, that I found myself starting to doubt.

“I could swear…but maybe…” I trailed off. Now that I thought about it, it did seem pretty ridiculous. A paper swimsuit? How would that even WORK? I was still convinced I was right, but now felt too sheepish to actually go to the front desk and ask. What if the manager had no idea what I was talking about and gave me…well, that look that Jon was giving me right then?

So we ran out to Target and bought Jacob a suit.

A year or two later, Jon and my brother John went on the road for work, setting up new broadband systems across the country. The two of them spent a lot of time in cheap motels together. On a particularly hot California afternoon, the two knocked off work early and thought they’d lie by the motel’s outdoor pool. Only problem? They hadn’t packed swimsuits.

“No big deal,” my brother said. “I’ll just go ask for a paper one at the front desk.”

I like to think that at this point Jon started to wonder whether he was going crazy or just the butt of an elaborate joke, years in the making.

When I’d suggested a disposable swimsuit, he’d thought the idea was so ludicrous that he didn’t even entertain the idea that I could be right.

But now here was my brother, calmly conjuring up the same crazy image, years later.

Jon protested, but weakly this time. So John went to the front desk and came back with – you guessed it – a pair of throwaway Tyvek trunks.

Needless to say, I was triumphant when I heard. And it was pretty hilarious, too, the way my brother and I had on two separate occasions made the same matter-of-fact statement, and how John had been able to vindicate us both with a simple request at the front desk.

I still wish I’d been able to see Jon’s face when confronted with an actual disposable swimsuit for the first time.

I recount this tale whenever I get a chance, because let’s face it – it’s hilarious, and I love ribbing Jon with it. But this week, as I told it to a friend, it occurred to me that what I love best about this story is that it illustrates the kind of shared memories siblings have, and how the most trivial thing – like a paper swimsuit worn at a budget motel in a small town in upper Michigan, decades earlier – can get cemented in our collective memories, creating a sort of mythology, a knowledge, an understanding of the world, that is unique to those brothers and sisters who share it.

I’ve written before about the importance of family mythology. But I had never quite thought of the swimsuit story as an example of a shared, bond-building narrative.

The truth is, though, that the little stories matter as much as the large, life-changing ones. They make up the fabric of our childhoods and our collective experiences, and now the stories my kids share are weaving together to create their own family mythology. The big stories, yes – the moves and the new siblings added and the graduations – but the little ones, too: the times they all sleep on the living-room floor and talk until the wee hours, the funny little phrases they’ve created, and whatever it is that’s going on in the back seat during those long road trips.

One day, I hope my kids have a paper swimsuit story of their own. Something they remember together, solid as fact, even if only shared between themselves. A memory they can turn to one another to validate, to be told “yes, that is how it was.” Their narrative, as real as a history book.

They the protectors of their own pasts, ready to defend their truths.