This photo is one of my very favorites of me as a mom. For vain reasons? Heck, yes. I look at it and think: hmmm, I like my hair that dark shade; and wow, that’s some lovely décolletage (thanks to nursing); and awww, isn’t that the sweetest little thumb-sucking boy you’ve ever seen?

I also love this picture for reasons less vain and perhaps more revealing. It’s a candid shot, and a genuinely happy moment – a flash of proof that such moments did exist during what was otherwise a pretty bleary and often grouchy time. That baby, my second, has a darling disposition but was (and is, even at two) a thoroughly rotten sleeper. He’s about four months old in this picture, which means I was many, many weeks into a year of military-grade sleep deprivation – with a two-year-old testing my patience during the day even as he demanded my attention all night long.

I was tired but, at least in this moment, I was happy. And it’s nice to look at a photograph and be reminded of that.

The topic of moms in photographs has taken off in the last few weeks, beginning with Huffington Post blogger Allison Tate’s piece The Mom Stays in the Picture. Allison’s essay, in which she comes to terms with her own reluctance to be photographed and makes a case for all moms to ‘get in the picture,’ has inspired some beautiful responses (like this one from Aidan Donnelly Rowley and this one from Catherine Connors) and prompted a whole movement of moms who are committing to getting out from behind the camera and being in more pictures with their kids.

In her essay Allison writes:

It seems logical. We’re sporting mama bodies and we’re not as young as we used to be. We don’t always have time to blow dry our hair, apply make-up, perhaps even bathe (ducking). The kids are so much cuter than we are; better to just take their pictures, we think.

But we really need to make an effort to get in the picture. Our sons need to see how young and beautiful and human their mamas were. Our daughters need to see us vulnerable and open and just being ourselves — women, mamas, people living lives. Avoiding the camera because we don’t like to see our own pictures? How can that be okay?

For me, it’s the candid shots that tell the real story: the photos that catch me in real-life mom moments doing the messy work of mothering. The reason I like the one I posted here so much is that I look calm, serene, happy, and in love with my baby. I think most of us can agree that’s what you call an extremely lucky photographic capture because – news flash! – I don’t always feel that way and I know for a fact I don’t always look that way.

I think if I have hang-ups about being in photos with my kids, it’s more about how I look when I don’t know my photo is being taken. My fear? That I’m frazzled and disheveled, that I’m frowning at my laptop while life happens around me, that I’m sporting an impatient and furrowed brow instead of a loving gaze, that my body language is more “let’s get this day over with” than “let’s remember this moment always.”

I’m sure if I went through my tens of thousands of photos for evidence, both extremes would be represented and every variation in between. Because, of course, we all have both kinds of moments – the ones where we can’t get enough and the ones where we’ve had enough – a hundred times every day. And like Meagan wrote in her Babble column recently (referring to the comical and revealing off-camera conversations caught on home videos): “It’s not always flattering … but it’s so, so real.”

And, I remind myself, the “real” that feels a little unflattering at this moment is the very same “real” that I’ll want evidence of in the future. I want to remember what I looked like on an average day – ponytailed and make-up-free – and see over time the expanding and then thinning of my body as it experienced three pregnancies in five years. I want the family portraits and posed shots to be well balanced with examples of “mom caught on camera, living life” – whether or not those pictures cast me in the most flattering light.

I want to remember the pretty pictures like the one above, yes; but I don’t want to airbrush the whole album because those candid moments caught on camera are proof that I was here, in the picture, in the flesh.

The image below is another one of my very favorite family photos. That’s my grandma on the left, bathing my aunt in the kitchen sink as my mom looks on from the right (along with a cousin? or neighbor boy? not sure who the little guy is). I’m guessing that at the time it was taken my grandma had her hands full – that baby was her third (of four, eventually) and we all know it’s not the easiest thing in the world to give a slippery naked infant a sink bath while preschoolers run around your kitchen. 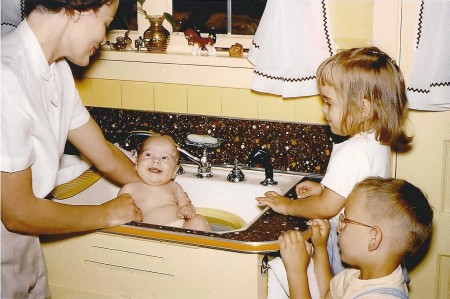 So if I look beyond what I see in the photo, I can guess that maybe there was a little stress in her life – but I don’t see it in the picture. I see the way she looks at that baby, and the baby back up at her. I see the charming vintage details on everything from the curtains to the windowsill to the countertops. I see the short sleeves and suntanned arms and imagine it was summertime. I see my mom look at her baby sister the way my oldest looked at her brother when I gave him baths in the sink.

I know that the floor might not have been spotless and another child might have been whining in the background, but what I see is real life and real motherhood cast in the most perfect light of nostalgia.

And it looks good, right?

Do you have a favorite candid photo of yourself in a “mom moment”? Do you avoid being in photos – candid or posed – with your kids? Do you look at old family pictures like I do for evidence of real life motherhood?