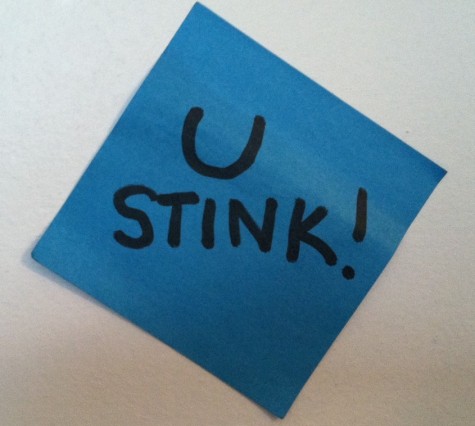 I’m out of town this week at Blog World Expo, so I’m bringing you a post I wrote last summer after facing some criticism on my blog. I thought you might enjoy reading it now. Hope you’re having a lovely week!

Last night, as the evening was winding down, a flurry of extremely harsh comments came through on a couple of my posts about hiring help.

If you’re a writer, perhaps you understand the sick feeling of being misunderstood and accused of being a person you know you are not. And so perhaps you also understand my immediate reaction, which was to fire off a couple of terse responses.

After that, I took the dog for a walk. (I should have done this in reverse order, but nobody’s perfect.)

I spent the first ten minutes of the walk sputtering and composing scathing responses in my head, all the way to the bluff downtown that overlooks Lake Michigan. When I got there, I came to a full stop – body and mind – and just stared at the orange and gray twilight over Lake Michigan. When I finally turned away from the water and started heading for home, my mind was much quieter. And that’s when this simple thought popped into my head: “Has this person earned the right to shake my peace?”

And the answer, of course, was a resounding “no.”

How silly that, while the vast majority of the nearly 300 comments in those two threads were kind and respectful, I’d allowed somebody who represented a teeny, tiny minority to get under my skin. Somebody I don’t even know. Isn’t it funny how one negative comment or reaction has a way of looming larger in your psyche than dozens or perhaps hundreds of positive, encouraging, supportive messages? For instance:

It’s only natural to feel deflated in the face of criticism: being human, of course a good dousing in cold water affects us. The question is, how do we harness our healthy human vulnerability (the kind Brené Brown talks about) to make us better people and to help us be more courageous and kind, instead of either cowering in the corner or becoming hardened?

I don’t think there’s anything particularly virtuous in being so thick-skinned that harsh criticism and name-calling don’t sting. In fact, I think the expectation that we should be able to buck up and withstand nasty-grams from attackers without feeling the blow is really messed up. Frankly, I don’t ever want to be that desensitized.

On the other hand…

We also owe it to ourselves not to allow criticism to totally derail us. I think an initial reaction of irritation, indignation and even anger is totally normal, but after letting yourself “go there” you have to take a big step back and look at the situation objectively. Otherwise you risk playing a losing game and getting mired down in negativity.

Here are a few questions I ask myself when I’m feeling particularly rattled by other people’s criticism:

Whether you’re chasing a dream, sharing your deepest feelings in a blog, or just trying to get through the day with kids, you’re going to encounter criticism. Sometimes it’s going to come from a place of loving concern, and sometimes…not so much. Either way it’s not easy to take. Give yourself a big break if you (like I did last night) initially over-react. You’re human. It’s natural to be hurt when people don’t seem to like you or support you.

But don’t let it keep you down. Chase the dream anyway. Write about your feelings anyway. Go out in public with your imperfect kids anyway, and bribe them with fruit snacks if you feel the need, even if that nosy cashier is watching. In the end, there’s a very small number of people to whom you have anything to prove, and you’re right at the top of that list.

Have you ever let a dream or decision get derailed by criticism? How do you deal when somebody doesn’t seem to like what you’re doing?

New to The Happiest Mom? Check out some of my most talked-about posts, and subscribe if you don’t want to miss a thing!