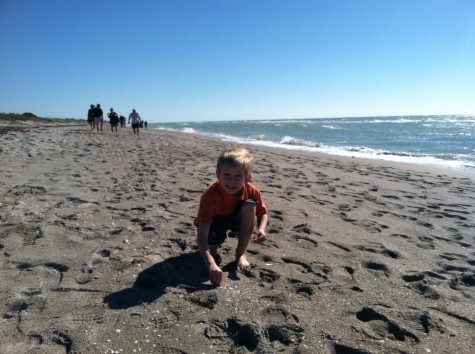 My son Owen, seven years old and in first grade, is as sweet and funny a little bundle of gap-toothed cuteness as I can possibly imagine. Lately I’ve been watching him seem to grow right before my eyes, and have been hugging him a little more often, willing him to stay so adorable and innocent and small just a few days longer, so I can really soak it in.

Not just Owen, of course, but how much he brings to me as a mother, and defines us as a family. How much his presence would be missed. How absolutely horrifying, unthinkable and devastating it would be to lose him.

I can’t breathe when I think of what the scene at the firehouse must have been like, or what those parents are doing or feeling right now.

Let others debate gun control and mental health issues; they’re important topics, but I don’t feel equipped to weigh in…at least right now.  I can’t stop imagining myself as one of those parents, and then it becomes too overwhelming and I have to stop myself from thinking about it at all.

Because the thing is, regardless of what the real cause of this senseless tragedy was, even if we could solve that particular problem once and for all, children will still die. It happens every year. It happens every day.

Kids die; not from mass violence, generally, but from sudden sickness or accidents or lingering illnesses. It happens all the time. And yes, until something horrible like the Newtown shootings happen, it’s easy to forget this living as we do in the insulated bubble of the first world. But none of us are truly safe.

I just finished the book At Home by Bill Bryson, which focuses on ordinary life throughout history, based on objects commonly found in homes. One of the things Bryson does an excellent job of illustrating in the book was just how dangerous (and, in many times and places, downright unpleasant) life once was for children.

It was not uncommon for mothers to lose half of their children before adulthood. It was not unheard of for all the children from a large family to be wiped out, whether from disease or house fires or some other tragic, but not all that uncommon event.

And yet, parents brought children into the world, with hope and with love. How?

I sometimes wish I could go back in time and ask them their secrets. “How do you get through the day, knowing that likely at least one of your children won’t make it to adulthood?”

As though their practical 19th-century advice could somehow give me helpful tips for coping with the anxiety of living in the much-more-safe-but-uncertain-enough-to-freak-us-out 21st century. As though maybe, by being around them, I could soak up some kind of fortitude or perspective I’m lacking in my cushy modern-day experience.

But maybe what I’d learn is that there really is no way to prepare for something like this, regardless of how likely or unlikely it is in your current circumstances. And that, while it’s understandable to examine our priorities and maybe, regrets in light of another mother’s tragedy, we really can’t go through life waiting for the other shoe to drop.

I know that for myself, some internal struggles I’ve been having lately over my priorities have suddenly become crystal-clear. At the same time, I also know that soon enough life will get back to normal, complete with petty annoyances and Calgon moments.

And while we can honor the Newtown parents who will never see their children again – and just live better lives – by making an effort to speak to our own kids more kindly, taking care to look them in the eye when they talk, agreeing to one more round of Go Fish, it would be unhealthy and unrealistic to parent as though a worst-case-scenario is probable instead of just possible.

One of life’s most hackneyed bits of advice is to “live every day like it’s your last” or, thanks to Tim McGraw, “live like you’re dying.”

But I’ve often joked that if I were to live every day like it was my last, I would wind up an anxious mess, trying to cram the most meaning (and, let’s face it, also the most bacon and brownies) as I possibly could into a single 24-hour period.

Maybe it’s healthier to live every day as though it’s a vital, important, irreplaceable part of a long, meaningful life. Because let’s face it: kids still need to hear “no” and moms still deserve the occasional grumpy or distracted moments.

Life – imperfect as it is – goes on, and as much as I might try to tell myself that I’ll never allow myself to heave a sigh at sweet little Owen again, this very day sweet little Owen will probably do something that triggers my “heave a heavy sigh” button, and he will continue to do so through the rest of his childhood and possibly, beyond.

My kids will annoy me. I will be short with them and sometimes forget to stop and smell the roses. And that’s OK. It’s life. It’s part of the story of family life and childhood and motherhood from the beginning of time. When we try to do better, let’s do it because it will create better lives for ourselves and our children, not because we’re afraid.

For most of us, life will be long, and we will have many, many chances to paint a “big picture” of beauty and love. At the same time, we can never know if we will be one of those for whom tragedy will strike.

Realizing that – without focusing on it too much – can help us strike that balance between “appreciating every moment” and giving ourselves enough grace to live imperfectly.

Before I was born, my mother had a baby who died of SIDS, and I have spent much of my adult life trying to make sense of her experience, what effects it had on her and our family, and what I would do in her situation.

A few years ago I wrote a post questioning how mothers can go on living after a child has died, and how we can make peace with the idea that our kids are mortal, without holding ourselves back from loving them and living whole lives, defined by joy and optimism rather than fear and anxiety.

Here are the last two paragraphs of my post, which seem appropriate right now:

It’s too late, in any case. My children are here; I’ve allowed myself to love them wholly and without reserve. They are as familiar to me as my own skin. It’s likely I’ve got several decades left on this earth; our family will grow exponentially, and car accidents, diseases and other tragedies will always lurk in the wings, threatening to claim one of us.

And in the midst of all this horror and sadness, that’s what I’m trying to do. Love my children not with the clutching, anxious certainty that they could be taken from me, but with the peace and pleasure and trust of believing that they’ll live long and healthy lives, and that even if, God forbid, one didn’t, that the rest of us would somehow go on and find joy in our lives.

I could be wrong. Any of us could. But in order to live a happy, functional, peaceful life, I’m willing to take it on faith that everything will be OK in the end.

Really, what other choice do I have?